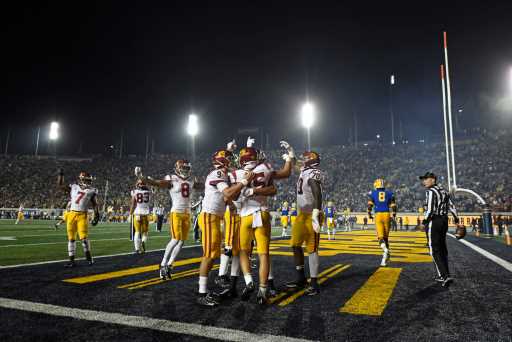 The Hotline mailbag will be published each Friday through the college sports season. Please email questions to [email protected] or hit me on Twitter: @WilnerHotline. (In each case, include the tag #Hotmail, as an acknowledgment that you have authorized publication of your name and question.)

Will the new commissioner go into the next round of media negotiations with ‘all hands on deck?’ Are all of the member schools media rights pledged to the conference? The USC AD has noted that if the new media deal is not to its liking the Trojans could look for a better deal elsewhere. What do you think are the minimum terms under the new deal to hold the conference together and give its teams a legitimate shot to compete at the P5 level in CBB and CFB? — Jon Joseph

There are no guarantees on this front, but I would be surprised if any of the schools refuse to pledge their media rights to the conference in the next contract cycle — a process that would essentially bind the school to the collective. And yes, this includes USC.

Had Larry Scott’s contract been extended, the Trojans might have been more interested in exploring their options. I’m not sure any university was more frustrated with conference management than USC. And as we saw from Mike Bohn’s comments last winter, that sentiment was in place before Scott’s handling of the football championship game placed USC in a terrible position.

The act of switching conferences or becoming an Independent involves numerous issues beyond football, from the fate of the Olympic sports to the branding of the university to the political, cultural and academic associations.

USC has spent many years and many millions on bolstering its academic bona fides and, like Stanford, Cal and UCLA, is now a regular member of the U.S. News top-25. It’s hard to believe the administration and trustees would agree to cut ties with their California peers.

By extension, it’s extraordinarily difficult to envision the L.A. schools leaving the conference in tandem.

The UC Regents wouldn’t allow UCLA to separate from Cal, and Cal wouldn’t go anywhere without Stanford (faculty revolt!). Meanwhile, there’s a better chance of Stanford dropping football and joining the Ivy League than of it ever becoming a member of the Big 12.

In our view, the California Four are an academic, athletic, cultural and political monolith, and the Pac-12 is the only existence that works.

As for the “minimum terms” of a new media rights package for the Pac-12, we have a baseline to assist with projections.

Two years ago, Major League Baseball agreed to a contract extension with Fox that runs through the 2028 season. The previous deal reportedly paid $525 million annually, while the extension is worth $728 million per year, according to the New York Times.

Pandemic or no pandemic, the market dynamics won’t be exactly the same in two years — when the Pac-12 negotiates its next agreement — as they were in late 2018, when the MLB/Fox deal was sealed.

But if we use 39 percent as a rough estimate, here’s our back-of-the-envelope math …

The Pac-12’s current Tier One deal with Fox and ESPN for the premium football and men’s basketball games is worth $250 million annually.

Meanwhile, all the inventory on the Pac-12 Networks generates about $125 million in revenue. (The football and basketball games account for most of it. The media rights for hundreds of Olympic sports events are negligible — hence the flaw in the business model.)

So that’s $375 million total for football and hoops.

Apply the 39 percent bump, and the conference would be in line for average annual payments of $521 million — or $43.4 million per school per year.

But there’s more to the calculation.

The annual distributions from the conference office to the athletic departments include not only the ESPN/Fox deal and the Pac-12 Networks but also the College Football Playoff and March Madness revenue.

So the campus payouts would be greater than the $43.4 million from a new media rights deal.

In a typical year, the Pac-12 receives approximately $150 million from those postseason events.

Add that to the $521 million from a hypothetical new Tier One deal, and we land on $671 million annually in conference distributions.

Which is about what the Big Ten schools receive now … before their renegotiated Tier One deal.

Is that enough to compete for titles? Impossible to say.

To a certain extent, the schools have enough now to compete for the CFP and NCAA titles, but the resource limitations (relative to the best programs elsewhere) narrow the path.

The additional revenue from a new media deal will help, but it won’t solve all problems.

Thoughts on Mitch Barnhart as a (commissioner) candidate? Checks all of the boxes! — @Beav_Scott

Kentucky’s athletic director is highly respected in the industry and has ties to the Pac-12, having run Oregon State’s department for several years at the turn of the century.

However, we aren’t yet sure about the nature of those “boxes.”

Do the Pac-12 presidents prefer a candidate from the world of college sports, or from the sports media space?

Would they consider someone currently employed in the Pac-12, or do they want new blood?

That’s all to be determined over the coming weeks.

Then, at some point in March, a model will take shape and the search firm, TurnkeyZRG, will begin contacting potential candidates.

Is the wait for a commissioner holding up the schedule release? Last I heard, early February was the expected release date, but we’re almost to early-mid or mid range for the month. — @otis

The release of the 2021 football schedule depends entirely on ESPN and Fox, which are slowly making their way across the Power Five.

The SEC’s schedule was released on Jan. 27, with the ACC’s the following day.

The Big Ten’s was unveiled Feb. 5.

The Big 12’s came out yesterday.

It’s unfortunate for the West Coast, but the networks follow the time zones in crafting their programming plans.

We expect the Pac-12’s schedule to be released in another two or three weeks.

The process is extremely fluid, and once we reach the tail end of the offseason cycle — perhaps in April, if not May — the Hotline will provide a full accounting of the Pac-12 departures and arrivals.

For now, I would strongly recommend the fabulous 247sports transfer tracker, which can be found here and has filters for conference, school and position.

After finishing 2nd, 3rd and now 4th in the Pac12 South. Why is the Herm Edwards hire considered a success? A couple more years of success like that and we will be at the bottom. — @analytics_fb

There are two reasons, each carrying equal weight at this point in his tenure:

1) The expectations were low — extremely low — when Edwards was hired away from the ESPN studios and asked to coach for the first time in a decade. Compared to an utter flop, his middle-division performance looks successful.

(The Hotline was slightly skeptical but willing to wait and see.)

2) ASU’s roster is well-stocked, both at the skill positions and on the lines of scrimmage.

In our view, 2021 is the year for the Sun Devils, and for Edwards: The talent and schedule are in place for a division title and top-25 ranking.

Will Utah break through and win the Pac12 under Whittingham? — @SaltLakeJake

A few years ago, I would have responded in the affirmative, without hesitation. Now, I’m not so sure.

The intra-division competition is improving, to the point that we view the South as stronger than the North entering 2021.

That’s not to say it will necessarily produce the best team, because Washington and Oregon have formidable depth charts, but the South looks like the deeper division.

I’m increasingly skeptical that Utah’s recruiting model, for all its success, is capable of producing a roster superior to all others.

Five years from now, we could very well look back on 2018 as the Utes’ best shot.

Support the Hotline: Several Hotline articles will remain free each month (as will the newsletter), but for access to all content, you’ll need to subscribe. I’ve secured a rate of $1 per week for a full year or just 99 cents for the first month, with the option to cancel anytime. Click here. And thanks for your loyalty.

*** Pac-12 Hotline is not endorsed or sponsored by the Pac-12 Conference, and the views expressed herein do not necessarily reflect the views of the Conference.