The Jones Rule of Wealth Management is “Double your wealth, don’t get divorced”.

The Jones Rule of Sports Management is “Double your wealth, invest in women’s sport”.

As we look forward to Saturday night’s final of the WBBL it’s worth reflecting on the strategy behind it and the lessons for the business of sport.

Elite women’s sport is not new. Maud Watson first cleaned up at Wimbledon in 1884, women joined the second Olympic Games of the modern era in 1900 and the women’s golf majors date back to 1937.

Elite women’s leagues are also not new. The Women’s National Cricket League has been running for 25 years and counting, building on a national carnival first contested in the 1930s, while the first national netball league began in 1997.

However what is new is elite women’s leagues becoming the biggest source of upside for traditionally male-dominated sports. 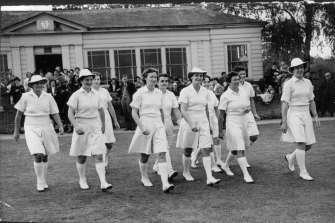 The Australian women’s cricket team take the field in Kent in 1951.Credit:Fairfax Archive

It is so new that numerous sports and leagues worldwide haven’t figured it out yet. And they are leaving millions of dollars on the table.

The typical argument for women’s sport is based on equity. Fair enough: it is self-evident that men and women should have equal opportunity in life, with what happens next a function of individual choice and market forces. Gender equity discussions are often dull because the principle is so obvious.

This desire for equity was a key input to cricket’s decision to professionalise the Australian women’s team, then later the domestic teams competing in WNCL and WBBL. My old shop, Cricket NSW, proudly led the latter in 2016, with the rest of Australian Cricket following a year later.

But equity wasn’t our only motivation. The other was economics. 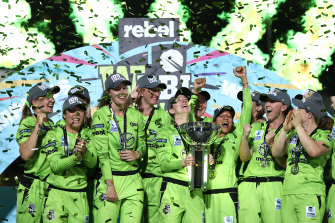 In most professional sports media rights are the biggest source of revenue. Sports are giant TV shows, financially speaking.

And, as for all TV shows, their value is driven by their expected audience per episode and the number of episodes per series.

So if you want to grow revenue, you need to grow the ratings or the number of episodes, or both.

Ratings can be maximised in various ways, for example playing matches at night, when more people are available to watch them, and choosing times of the year when there is less competition for viewers. Having regular timeslots is also important, Thursday and Friday Night Football being the best examples. 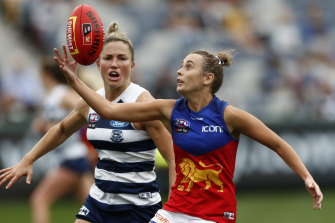 Gabby Collingwood of the Lions gathers the ball in front of Melissa Hickey of Geelong.Credit:Darrian Traynor/Getty Images

Episode volume is traditionally managed by adding rounds and/or teams. The AFL expanded to 18 men’s teams some years ago and the NRL has finally added a second Brisbane club, the second-biggest strategic no-brainer of the decade (we’ll get to the biggest a little later).

Hence with each team playing 22–24 regular season games, AFL and NRL each stage and sell around 200 men’s matches per season.

Nevertheless, there are only so many episodes of a series you can put on before the audience gets bored. The law of diminishing returns is powerful. To fight it, you need something new: new characters, new storylines, maybe a new timeslot or format.

Their costumes are familiar — Sixers pink, Stars green, Scorchers orange — as are their sets — the SCG, the MCG and Optus Stadium. But the actors are different. Each bats and bowls in a slightly different way to the cricketing characters we knew before; each has a different backstory.

The result is perfect television: just similar enough to the original hit series, BBL, to retain the magic, and just different enough to deliver new interest.

If Hollywood did something similar they’d end up making money from female-led reboots of Star Wars, Ghostbusters and Ocean’s 11. Oh, wait a second….as we’ve learned, Hollywood is hardly a bastion of women’s lib but definitely a bastion of lucrative sequels and spin-offs.

Likewise, Cricket Australia will make millions out of WBBL. CA’s domestic media rights deal has increased from roughly $55m per year in the international cricket-only era to nearly $200m per year now, thanks largely to 61 games of men’s BBL. WBBL, however, was valued at zero or very close to it. 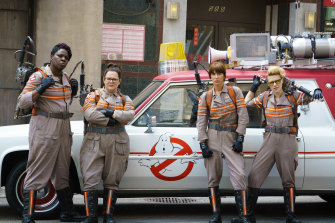 Old favourites with a female re-boot … Hollywood have been doing it for years.Credit:AP

That won’t be the case next time around. WBBL has become the fourth-highest rating sports league in Australia, men’s or women’s, and its 59 matches will be valued accordingly.

Its October-November window also provides the perfect bridge from the AFL and NRL seasons to the BBL and international summer. For free to air this fills the gap left by the loss of Thursday and Friday night football and for subscription services it reduces subscriber churn after the footy grand finals.

It will be hot property.

If sanity prevails and private equity is kept at bay, that additional revenue will be reinvested in to grow WBBL and the other parts of cricket even further.

So how do you build a women’s league? It’s a good idea to start with a popular sport.

That gives you a starting audience and hopefully some spare cash to invest.

Then, you have to take the view that you are building a commercial asset, not just ticking a box or doing female players a belated favour. (Although, again, equity is important.)

That drives a bunch of further important decisions: 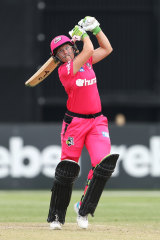 Happily, the ICC understands this and has just made women’s cricket the no.1 priority for growth in their new strategy. (Yes, they were well-advised by The Killer Group.) The ECB has also upped the ante via The Hundred.

But one key cricket body has yet to figure it out: the BCCI.

The biggest strategic no-brainer of the decade is a Women’s IPL.

The BCCI and its franchisees have the biggest cricket fan base in the world, the biggest team brands in Indian sport, and the opportunity to double their commercial inventory overnight. And be applauded for it!

How there isn’t already an IPLW is beyond me. The equity issue is obvious; the economics are also. It is a billion dollar idea staring billionaires in the face.

Come on guys, double your wealth, don’t get divorced.

Double it again, and invest in women’s sport.

Andrew Jones is CEO of The Killer Group. He was previously chief executive of Cricket NSW (2013-19) and CA’s General Manager Strategy (2010-12).