Just how big a part Keisuke Honda plays in Melbourne Victory's top-of-the-table clash against Perth Glory on Sunday evening remains to be seen.

But Victory boss Kevin Muscat is optimistic that Swedish frontman Ola Toivonen, an absentee from the line-up that grabbed a late win over Central Coast last weekend, will be available. 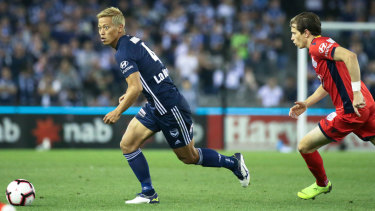 He’s back: Japanese superstar Keisuke Honda is expected to play some minutes against Perth Glory on Sunday. Credit:AAP

Honda's involvement is unlikely to be long, as the Japanese superstar is not yet fully recovered from the serious hamstring injury that kept him out for the best part of two months.

However, one player who will miss out, and whose leadership will not be available to coach Kevin Muscat, is Victory skipper Carl Valeri.

Injury-plagued German defender Georg Niedermeier could come into consideration, while James Donachie, who has rejoined Victory after a spell in South Korea, is still looking to find match sharpness since rejoining the club.

"Whilst Georg has been in his rehab and running and working on his fitness, Donks (Donachie) has had a little bit longer off," Muscat said.

"One’s fresher than the other. But (Donachie) hasn't played games for a while.

"We have to acknowledge that Leigh Broxham and Tommy Deng have done a tremendous job, they've been really good for us.

"Under the circumstances where they've had to back up and back up, it's nice to start getting some bodies back."

Muscat was circumspect about Honda's involvement.

"We've got to be realistic about how they can impact and influence the team because we've performed remarkably well considering the players and quality of players we've not had available.

"If I'm realistic (about Honda), who knows. If he is involved I can't see him coming on in the first half."

Muscat explained that the sort of injury Honda has needs to be managed carefully, even when he has recovered. 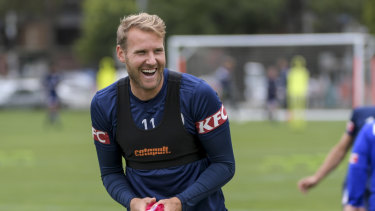 A training knock kept Swede Ola Toivonen out against the Mariners, but he’s ready to go for Victory again.Credit:Eddie Jim

"With injuries whilst you're gaining fitness you fatigue quicker and under fatigue you’re at more risk. All those factors will be taken into consideration," he said.

One possible strategy would be to shift Deng to right back and bring in one of the centre backs.

"He certainly can play there when the opportunity arises, when you've got the luxury of resting a player here or there," Muscat said. "That might be a possibility. At the moment, probably not.

"We've (now) got the opportunity to get Terry (Antonis) back into midfield. He played full-back last week.

"When Elvis (Kamsoba) came on, albeit it was a slightly different midfield position, he did extremely well for us and in fact changed the game. There's an opportunity for him in there as well.

"We're waiting to hear from Ola (Toivonen) to see how he pulls up as well, so we've got some options now.

Muscat explained wy the Swede was left out of the line-up for last week's game against the Mariners.

"He (Toivonen) got a knock last week in training," Muscat said.

"As the days went on he got a little bit worse.  He felt so much better a day or two before (game day, but) there was no point taking any risks with him."