Australian hockey will enter a new era on Wednesday with the launch of a revamped domestic league complete with fresh teams and tweaked rules as the sport seeks to broaden its appeal outside of its well-known national sides.

Hockey One will replace the former Australian Hockey League and will feature seven new clubs and run from mid-September to late November. One of those teams will be NSW Pride, which replaces former sides NSW Waratahs and Arrows. 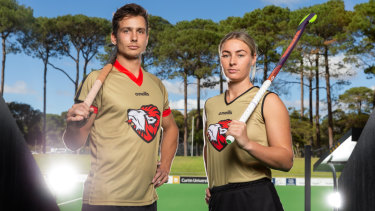 New look: Tom Craig and Mariah Williams will be part of the NSW Pride in the new Hockey One league.Credit:Hockey Australia

All clubs will have female and male teams under the one banner as they undertake a rapid-fire, six week home-and-away season that guarantees three home games per side. All clubs will also play male-female double-headers as standard.

In a signifant move, all games will be steamed via Kayo Sports with the finals on Fox Sports.

Hockey Australia chief executive Matt Favier said the sport was aspirational and wanted to change up its historical format to try and reach new fans, as well as reward old ones with a more-dynamic domestic league.

"This is a significant and exciting announcement for Hockey in Australia as we strive to put fans first and showcase everything that is great about our game with this ambitious new league," Favier said.

"The feedback we received from numerous surveys and research conducted in recent years with Australian hockey fans, players and officials has shown there is an appetite for a new approach to our domestic hockey league, much like other sports have adopted like cricket’s Big Bash League.

"We’ve worked with our member associations on their club identities, which are fantastic and full of life and colour. They are sure to engage existing hockey fans and the next generation."

Hockey has long been an Olympic staple for Australia and the national sides for women and men have consistently been among the best in the world. The Hockeyroos are three-time Olympic champions and the Kookaburras won gold in Athens 2004. Both have won a string of silver and bronze.

The sport is undergoing significant change to ensure its relevancy outside of the Olympic cycle. It now has an FIH Pro League that travels the world and features the elite national sides, while Hockey One is about to appear on the local market. 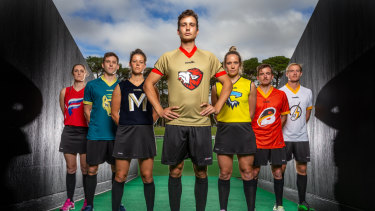 "Hockey as a game is a fantastic entertainment product and we want to showcase that to the wider Australian public through Hockey One," Favier said.

Some of the new rules have already been trialled and will include a rugby league style conversion after goals scored from the field or penalty strokes. Teams will also have access to pump plays that see sides trimmed to nine players from 11 for the final five minutes of a quarter, with goals then worth double.