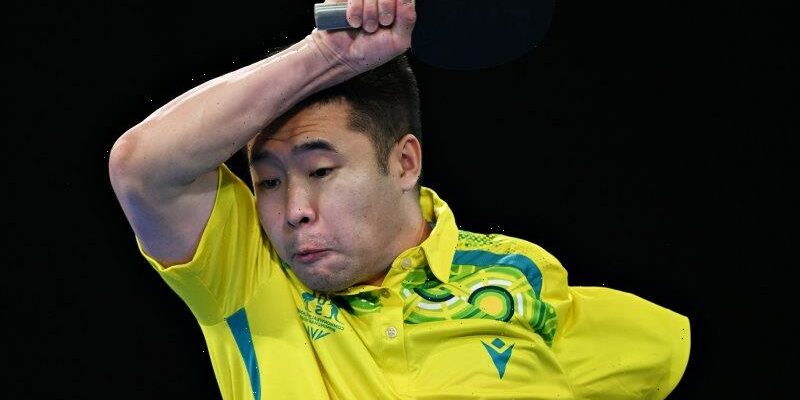 Birmingham: Lin Ma isn’t afraid of bears, even though one bit off his right arm when he was five years old.

“A brown bear in the zoo,” he says. “I was feeding it. But I’m more scared of sharks — because I like diving.”

Ma is the great white shark of para table tennis, winning gold for China at the Beijing, London and Rio Olympics before representing Australia in Tokyo having moved countries in 2017.

Here, at the Commonwealth Games, he heads a six-strong Australian line-up determined to win as many medals as possible, hopefully gold.

Did you know Australia is a powerhouse in para table tennis? Me neither. We should be. The squad is so strong that Melissa Tapper, who won gold at the last Comm Games on the Gold Coast in 2018, couldn’t get in, with Lina Lei and Qian Yang — who have represented China but won Paralympic gold for Australia in Tokyo — edging her out.

Like all sports, the nuances of para table tennis are difficult to pick up but are nonetheless fascinating, with certain shots and spin used to beat opponents. 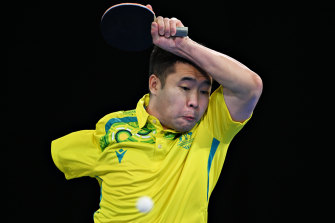 Lin Ma does plenty of core work to make up for only having one arm.Credit:Getty

Classifications in disability range from one to 11 and the Commonwealth Games are unique in that there are players from different classifications playing against each other.

For instance, Australia’s Jessy Chen is a C3, which means he is in a wheelchair but limited in his forward movement. He played Nigeria’s Nasiru Sule, who is a C5 and has more range sitting in his chair.

Sule’s advantage was to play to Chen’s weakness. Time and again, he delivered towering lob shots with pinpoint accuracy as they landed just on the other side of the net before heavy side spin slid the ball out of Chen’s reach.

Chen can use the same shot, but his go-to is the “tetra-loop”, which is also a lob shot that spins the ball backwards.

Balance is also a problem for Ma, meaning he does more work on his core in the gym.

“Not too many opponents are like me, with just one arm,” he says. “It’s difficult because I don’t have good balance. I’m playing opponents with a lighter impairment.”

Now here comes Danni di Toro, 47, a seven-time Paralympian and co-captain of the Rio and Tokyo teams who Kurt Fearnley recently described as the “heart and soul” of the team. Fair endorsement from the King himself. 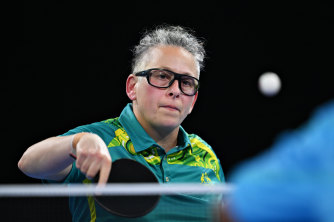 A former para tennis player, she switched to table tennis in 2015 and while she was “shattered” about losing her first-round match, she was philosophical about her sport’s future.

She said the quality of the table tennis squad had lifted since the arrival of the three superstars from China.

“For them to decide Australia is going to be the place for them has really lifted the sport,” she said. “They’re all teaching us a lot, they’re really lifting the team.”

Asked about Tapper missing out, she said: “That’s just sport. People make decisions about where they want to be that are good for them. It’s put a lot of pressure on everyone, and that’s good. That’s what we all need. It’s a shame that Milly’s not here, but it shows the depth and breadth of this team. She’s helped build that. There’s a strong foundation because of Milly Tapper. We all play a role in that.”

At each venue, a short video is often played on the big screens explaining the various rules of the sports you are about to watch.

At the netball at the NEC Arena, a bold declaration is made: “Netball is a non-contact sport.”

The match between the Diamonds and the lively Jamaicans was so physical it could’ve been a game of footy as players caught stray elbows and copped shoulders in the back. All accidental, of course. 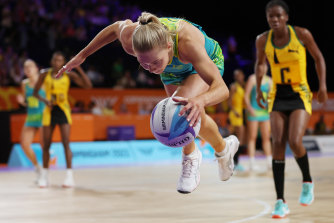 Kate Moloney dives to keep the ball in play against Jamaica.Credit:Getty

In a rugby league context, the match review committee could have issued a multitude of charges for careless, reckless and dangerous contact.

Fittingly, an Australian fan was spotted in the crowd wearing the Kangaroos jumper. Still no sighting of Random Souths Guy at these Games, however.

The Jamaicans celebrated their win with a group dance that has appeared on the players’ TikTok accounts, although captain Jhaniele Fowler was having none of it.

“I can’t dance,” she laughed, which is OK because holy hell can she shoot. 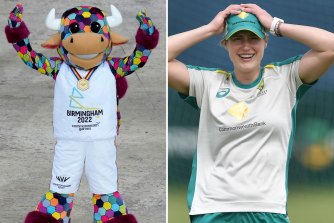 Forget about when Harry met Sally. Australia’s cricket team is desperate for Perry to meet Perry.

Perry the Bull is the mascot of the Commonwealth Games while Ellyse Perry is arguably the greatest women’s cricketer of all-time.

She hasn’t played a match so far at the Commonwealth Games because of a back injury.

“I have yet to see a photo of Perry and Perry so I don’t believe they’ve met,” teammate Alana King told Inside the Games. “I think Pez will really enjoy Perry by her side.”

“My father didn’t talk to me for some days when I won bronze at the 2018 Games.” — Pakistan’s super-heavyweight lifter Nooh Butt after winning gold with a record lift of 405kgs. That’s one way to get over your daddy issues.

Australian cyclist Grace Brown lived up to her pre-race favouritism to win the women’s time trial in Wolverhampton. She clocked 40 minutes and 5.2 seconds over the 28.8-kilometre course to claim the gold medal, her first in the Commonwealth Games. “I need to actually invest in a trophy cabinet now,” she said.

We received a few angry emails about Channel Seven failing to broadcast the women’s 100m athletics final, which is silly because Elaine Thompson-Herah’s run was something to behold. “I watched Seven carefully until at least a half-hour after the men’s final and absolutely zero on women’s final,” said one. We asked Seven for comment, but it didn’t respond.

Get all the latest news from the Birmingham Commonwealth Games here. We’ll be live blogging the action from 4pm-10am daily.