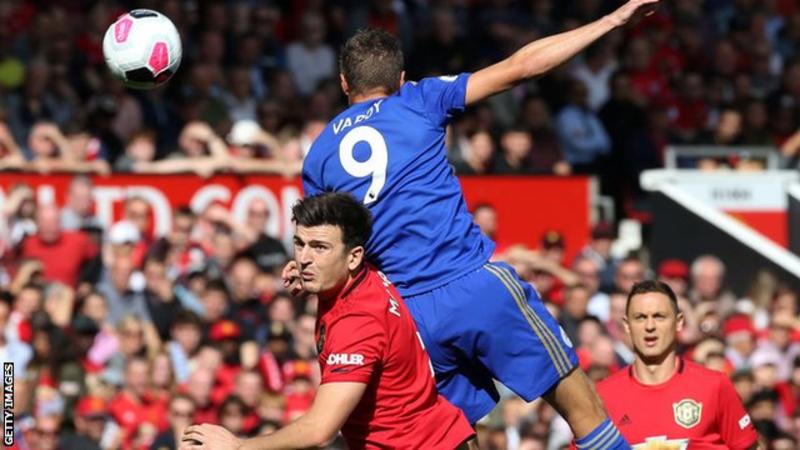 In the second minute of injury time of Manchester United’s 1-0 win over Leicester at Old Trafford, the visitors were awarded a free-kick in their own half.

Kasper Schmeichel took it. As a tense home crowd held its breath, the Foxes keeper punted the ball deep to the edge of the home box where a dozen players waited to challenge. Harry Maguire leapt, leant over Jonny Evans and got his head to it. United cleared the second ball. Leicester never got into their half again.

Maguire’s header was not a thing of beauty. It wasn’t even close to being his best moment of the match. But on a day when United’s season was on the edge and even a draw would have left them in the bottom half of the table, it was hugely important.

And it allowed their £80m summer signing the last laugh over the Leicester fans who used to love him but now sing about not needing him.

Number one target – for Solskjaer and Foxes fans

Ole Gunnar Solskjaer made Maguire his number one transfer target after watching the Yorkshireman play against his United team at the King Power Stadium in February.

The Norwegian identified Maguire’s composure, his reading of the game and his leadership as key attributes. He also believes the former Sheffield United and Hull man is a goal threat, which he was against Leicester with a second-half header from a corner which Schmeichel got down well to save.

The fee for acquiring these attributes was too much for Manchester City, whose manager Pep Guardiola is also a fan. It ended up eclipsing the £75m Liverpool paid Southampton for Virgil van Dijk, turning Maguire into the most expensive defender of all time.

Brendan Rodgers understood why the deal happened. The Foxes boss accepts the pull of England’s leading clubs. It’s fair to assume his players do too given the warmth with which they greeted Maguire in the tunnel. Evans, a former United player himself, chatted away as the pair made their way out onto the pitch.

The reasoned stance is not one shared by Leicester’s supporters. They booed Maguire’s name when it was read out over the tannoy just under an hour before kick-off. Then, as the game began, they turned on the England defender, with an expletive-riddled song that informed him he was no longer welcome at the King Power Stadium.

“That’s what happens isn’t it?” said Rodgers. “The Leicester coaches, players and supporters, in the main, really respect Harry for the great work he did at Leicester. He made the move. It was great for Leicester and he gets the chance to live his dream.”

The heir to Vidic?

In the summer of 2018, Jose Mourinho wanted to buy Maguire but United’s officials baulked at Leicester’s £70m asking price. Presumably, Solskjaer reinforced the message, which is why they paid more 12 months later.

You don’t have to watch Maguire for long – nor have seen United that much over the past few years – to understand why his addition is overwhelmingly positive.

Maguire is not perfect, as Solskjaer pointed out afterwards when he identified a missed header in the build-up to an early David de Gea save from James Maddison. But he exudes confidence, is rarely flustered and covers the ground with deceptive speed.

At one point around the hour mark, Demarai Gray got around the back of Ashley Young and appeared to have the whole of the United half in front of him. In a flash, Maguire had spotted the danger, cruising to his left to initially halt Gray with a well-timed block tackle, then recovering his balance quickly enough to reach the loose ball first, nudge his opponent out of the way and then stride forward with it at his feet.

Again, it seemed innocuous. But if Maguire had not intervened, Gray would have sped on to threaten the home goal.

The way the England centre-back marshals those around him, it is impossible not to think at some point in the near future he will be wearing the captain’s armband as another central defender, Nemanja Vidic, used to do.

“Harry is a leader, on and off the pitch,” said Solskjaer. “He sticks his head on things. When we struggled to keep the ball, he put his foot on it and just slowed everything down.

“Against a striker like Jamie Vardy, you have to be spot on with your decision-making; when to step up, when to drop back. He proved his worth today.”

Around for the long haul

Before a game many predicted Leicester would win – doing so would have taken them six points clear of their opponents in the early race for the European spots – it was said United would have been far better off keeping Evans, who Louis van Gaal sold to West Brom for £6m in 2015, than ending up with Maguire for more than 10 times than sum.

The argument is moot. For a start, Evans is five years older. United have given Maguire a contract that extends to 2026 if it runs its course and the option for an additional year is triggered.

He is very much a modern-day defender. In a passing session during the warm-up before the game, Maguire took possession under pressure from Daniel James, rolled the ball under his right foot, then passed it with his left. James was completely flummoxed.

In the three-year plan Solskjaer showed to United’s hierarchy when he first met them about replacing Mourinho last December, it was essential to have a presence like Maguire’s at its heart.

Not that Maguire will be letting that – or anything else for that matter – go to his head.

“It was important to get the win,” he said.

“We have to build on a solid base and we want to keep clean sheets. We could have kept the ball better but we defended well.”