In that favourite Australian expression of ambiguity, the key questions from the first day of the Perth Test match were answered: Yeah, no.

On the positive side, Marcus Harris and Aaron Finch produced a century opening partnership on a green wicket, as delightfully unexpected as a drought-breaking shower. Harris was the batsman of the day, before Travis Head signed his name to another innings of encouraging maturity. Among their newest and youngest arrivals, Australia have found some batting hope.

In the shadow of these selectors’ gambles coming good, however, the selectors’ banker fell through, Usman Khawaja again unable to get his wheels out of the rut that captured him in Adelaide. Shaun Marsh made another promise he couldn’t keep. On an uneven wicket, Australia rode the waves of fortune good and bad, and may have compiled a weighty first innings. Or not. 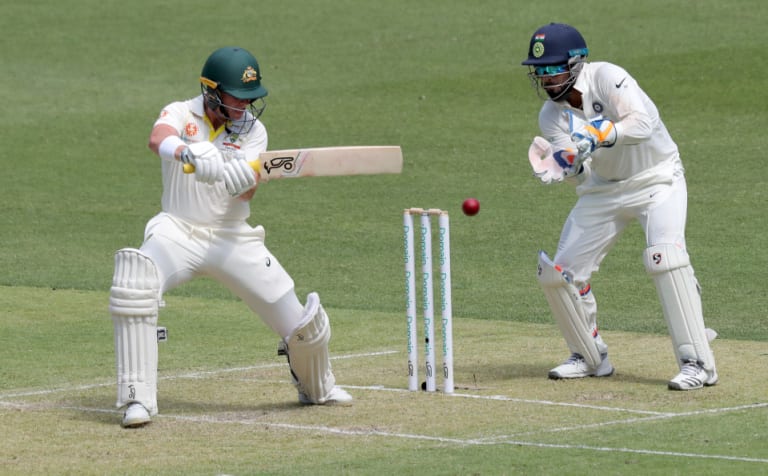 Looks the goods: Marcus Harris punches the ball through the off-side on Friday on the way to top-scoring with 70.Credit:AAP

All these statements are qualified by the mysteries of a brand-new wicket in a brand-new venue, but it does seem that in their summer of need, Australia have found two young batsmen on whom they can stake a future. Harris, in two Test matches, has already become the top-order batsman Australia wants to love.

There is an element of wistful, and wishful, thinking here. In the way that most cricketers remind you of other cricketers, Harris adopts a two-eyed stance reminiscent of that earlier Perth-raised southpaw, Justin Langer. Then, when he straightens his back and takes two steps across his crease, Harris could be pure Simon Katich. And in his off-side driving, particularly the compact back-foot punches through cover, Harris is the image of he-who-must-not-be-named.

If Harris does ever get to open the batting with the Randwick Petersham leftie, they will be difficult to tell apart, given the similarities of build and mannerisms. But Harris is very much his own man making his own way.

The 26-year-old went 26 minutes without scoring his first run on Friday, to go with his pair of 26s in Adelaide. Clearly unsuperstitious and unworried, he built his innings at a classical opener’s tempo, steady over the ball and judicious in choosing when to play. He has even improved in the space of a week, excising a tendency to lash out in frustration. And he got past 26 without a care.

Harris was helped by the knowledge that he would not have to face the injured Ravi Ashwin, who bothered him in Adelaide. He resisted the diversity of India’s four-man pace attack, be it the swing of Mohammed Shami, the pace of Umesh Yadav or the perplexing angles and whip of Jasprit Bumrah (who reminds you of no other cricketer). Ishant Sharma tried to glare Harris into submission, but somehow a glare from Ishant contained all the threat of a glare from Alice Cooper. 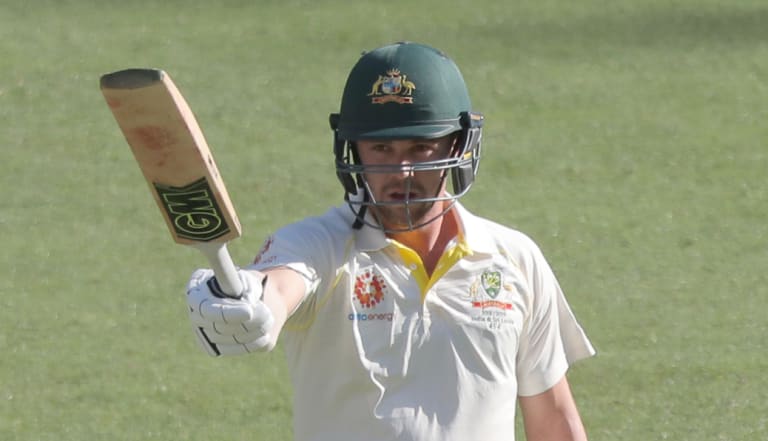 Singles from Harris brought up both the 50 and 100 partnerships with Finch, celebrated with two sturdy handshakes. The previous Australian opening pair to have reached these milestones was David Warner and Cameron Bancroft, a year and an alternative universe ago.

It had been a leap of faith for Tim Paine to send his inexperienced openers in after winning the toss, but Finch is nothing if not willing. After receiving a crash course in keeping his balance against balls aimed at his pads, he profited from India’s predictable line, clipping nicely to leg and only missing those that were bouncing over his stumps.

But, as his chief tutor Langer had reminded everyone, Test cricket contains more time than you could possibly dream of. For Finch, mental stamina is another of the challenges. He began to stagnate with the effort, growing fatigued from the relentless examination, falling across the line and into old habits.

Three loose half-volleys from Ashwin’s replacement, Hanuma Vihari, gave Finch eventual passage to his half-century, but his bloom was fading by that time and it was no real surprise when Bumrah clattered his pads yet again.

After a middle-order collapse threatened to snowball, Head made his third half-century in four appearances, precious runs in the context of both game and career. The South Australian, another built in the image of his team coach, steadied the innings and made the most of a tiring attack. He will feel annoyed at not converting a start into a higher score, but Australia will value his ability to back up scores with more scores and achieve consistency.

Head’s dismissal came at a time when the players were distracted by the jagged shadows of the Perth Stadium creeping across the pitch. The new stadium has its vagaries, notably a wicket that showed itself capable of shooters, fliers and everything in between.

Showing his inexperience during the distraction, Head paid the price with his first loose shot. The setting sun caused problems as it peeped through the gaps in the stadium architecture, which did not escape Virat Kohli’s notice. In coming days, expect other batsmen to rage against the prying of the light.