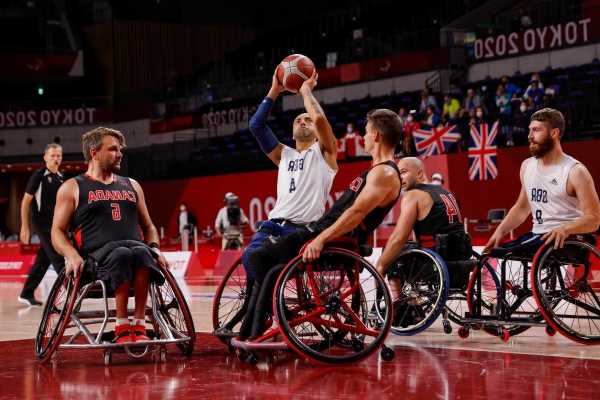 Great Britain’s men are into the semi-finals

When their head coach tested positive for Covid and was forced to stay at home, Great Britain’s men’s wheelchair basketball team appeared to be a ship without a captain in Tokyo.

But through choppy seas they’ve somehow navigated their way to the semi-finals of the Paralympic Games – and will take some stopping as they chase the gold.

It admittedly took Great Britain a while to click into top gear in their quarter-final against Canada but when they did, they were irresistible as Gaz Choudhry led Great Britain to a 66-52 victory.

They will now play Japan in the semi-finals on Friday and know that a win will propel them to a gold medal match that would be as remarkable as unlikely following a stressful start to the Games.

Head coach Haj Bhania had almost finished packing when he received the news he tested positive just 48 hours before the plane was due to depart.

In a last-minute shake-up, star player Choudhry was installed as player-coach and is in charge of leading the team in Tokyo.

He proved he’s doing a fine job in both departments by top-scoring with 21 points against Canada and says the upheaval has created a siege mentality.

“It is easy to be a team when everything is going good, it really is,” said Choudhry. “I have been a part of teams where it has seemed like sunshine and rainbows but any kind of adversity and it is a house of cards and comes down.

“We are a team that no matter what adversity we face, we gel together better and we’re like a block of Jenga, you keep taking pieces out but we seem to stay sturdy. And no-one has yet to find a move that knocks the whole thing down.

“It was an absolute gut-punch. But we have a mantra that anything that’s crazy can happen and will happen and this is the sort of year everyone is going through.

“So we had planned for this, we had really stringent protocols, such as if one person goes down, that sort of stuff. We played the scenarios out and were confident that even of it did happen, we’d get over them.”

Great Britain have become the comeback kings in their last two matches at the Ariake Arena.

In their last group game against Australia, they overturned a 13-point half-time deficit to win 70-69 in the final second and, while it was not quite as dramatic against Canada, their fast finish was still impressive.

Canada led 30-26 at half-time but Great Britain outscored them 24-9 in the final quarter to race into the last four.

“I don’t know what it is, we seem to play our best when we have out back against the wall and I am not sure why,” Choudhry added.

“If I could bottle up what we have been doing when we are down big, we would have it from the start.”

Sainsbury’s is a proud supporter of ParalympicsGB and a champion of inclusive sport for all. Sainsbury’s commitment to helping customers to eat better has been at the heart of what we do since 1869. For more information on Sainsbury’s visit www.sainsburys.co.uk/ and https://paralympics.org.uk/