The archetype of the Olympian is evolving, as evidenced by the potential arrival of a new sort of athletic competitor at the Summer Games: B-boys and B-girls.

As part of an effort to appeal to younger fans, the organizing committee for the 2024 Games in Paris announced on Thursday that it would recommend break dancing — yes, the street dance form with moves like flares, headspins and windmills — as a new sport to be added to its program.

The proposal — which also includes a recommendation that skateboarding, surfing and climbing, which will be introduced next year at the Tokyo Games, remain on the program — will be formally presented to the International Olympic Committee executive board at the end of March. The I.O.C. is not expected to confirm the events program for the 2024 Games until December 2020.

Break dancing was enthusiastically received when it made its debut at the Youth Olympic Games last summer in Buenos Aires. The eventual medalists there hailed from Russia, France, Japan, South Korea, Canada, Italy, Austria, Vietnam and Argentina — a vivid sign perhaps of how extensively the activity has spread since its beginnings decades ago in New York City.

“Breaking has two elements,” Nakari Shigeyuki, a Japanese teenager known as Shigekix who won a bronze medal at the Youth event, told Olympic.org in October. “One is sports, and one is arts. We need the stamina of athletes, but we also need to be artists, and express our feelings.” 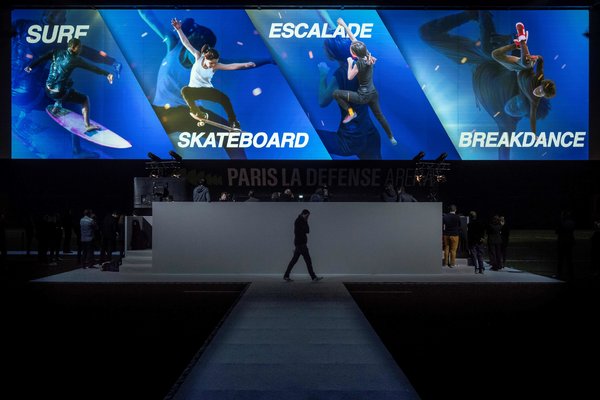 The sport’s potential moment in the global spotlight arrives as the I.O.C. continues its efforts to engage new fans — particularly young ones — in a sports landscape flowering with alternatives to the traditional Olympic program.

To that end, the I.O.C. created new rules recently to allow host cities to recommend new sports for the Olympics program. Organizers for the 2020 Games in Toyko proposed baseball/softball, karate, sport climbing, surfing and skateboarding, which the I.O.C. eventually approved. (Because host city recommendations are valid for one Olympic Games only, karate and baseball/softball will not return in Paris.)

Paris 2024 organizers said their aim was to include “sports that can be shared on social media, sports that are a means of getting around, forms of expression, lifestyles in their own right, sports that are practiced every day, in the street and elsewhere.”

The organizers said their values led them to “sustainable and socially responsible” sports that do not require permanent facilities; sports that will engage young people and those in urban communities; and sports that are culturally relevant to France.

Another initiative in that vein will be the opportunity for amateurs to run the Olympic marathon course after the official race has ended (which is, in essence, how most major marathons in the world operate, with a group of professional competitors preceding a larger, amateur field).

In their break dancing proposal, Paris 2024 organizers said there would be men’s and women’s events with a total of 32 athletes who would officially be referred to as B-boys and B-girls.

The competitions, meanwhile, would be referred to as “battles” and feature dancers taking turns performing dance moves and spins on the floor. Each routine would be graded, the organizers said, on criteria “such as technique, variety, performance, musicality, creativity and personality.”