Daniel Worrall's career-best Twenty20 figures couldn't have come at a better time for the Melbourne Stars.

The swing bowler, considered a bolter for Australia's Ashes squad, picked up 4-23 as the Stars upset Hobart Hurricanes in Thursday night's elimination semi-final at Bellerive Oval. 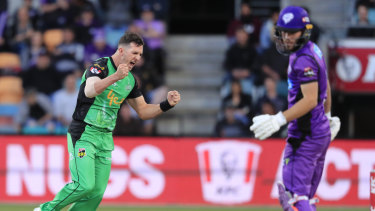 "I just thought I'd change it up and get them to think something else was going to happen but I was just going to bowl the same ball anyway," Worrall said.

"I think in Twenty20 … you've just got to be almost chaotic. Sometimes it works sometimes it doesn't."

The Stars are into the BBL decider for the second time, having finished runners-up to the Sydney Sixers in 2015-16.

On Sunday they'll meet either the Sixers or Melbourne Renegades, who face off in the second semi-final on Friday night.

It's a marked turnaround after finishing with the wooden spoon last tournament.

"After last season where we didn't meet our expectations, everyone's just happy to be playing good cricket at the right time," Worrall said.

Worrall joked he was on the Renegades' bandwagon and gunning for a packed Melbourne derby.

"Whoever it is, it'll be an exciting contest and we'll be doing our best to get our first piece of silverware."

Added Stars captain Glenn Maxwell: "I'd love to see the Renegades get up and have an all-Melbourne final. I think Melbourne's been crying out for that for a while." 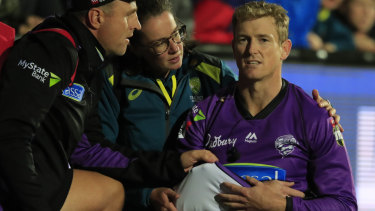 George Bailey will have scans on his injured shoulder.Credit:AAP

Bailey dislocated his right shoulder diving to stop a boundary. He was helped from the field by medical staff who had to pop his shoulder back into place.

"I think it popped out so he'll have to have scans to find out exactly what happened. It didn't look great on the ground," Hurricanes captain Matthew Wade said.

It remains to be seen whether Bailey, 36, will be able to play the remainder of the Sheffield Shield season for Tasmania.

It was an unsavoury end to the BBL for the Hurricanes, who finished two games clear atop the table to earn a home semi-final.

Wade denied weight of expectation broke the back of his team that won five straight games to start the tournament.

"There was not any added pressure. Every game of cricket to be fair, when you walk out, you're under pressure to perform," he said.

"We didn't do as well as we would have liked."

There have been calls to change the finals format of the expanded BBL to give the top two teams a second chance, but Wade isn't moved.

Hobart made the BBL final from fourth last season after knocking off minor premiers Perth Scorchers.

"The shoe can be on the other foot like it was for us last year when we cruised through to a final.

"You've got to play the right cricket at the right time, and we didn't."