It was a year of fitful but undeniable progress for women in sports as they ascended to places in the executive suite, in the commentary booth and on the awards podium they had never reached before.

There was a decision to award equal prize money in professional surfing and moves to give equal pay to women’s and men’s national soccer teams in Norway and New Zealand, which will likely lead to others’ following suit. Women from South Korea and North Korea joined forces to compete in hockey at the Winter Olympics and in other sports at the Asian Games.

Serena Williams came back from pregnancy to reach two Grand Slam finals at age 36 and pushed hard for tennis to make more allowances for working mothers.

Many of the breakthroughs in 2018, as is so often the case, were overdue. None were more emotionally wrenching than the scene in a Michigan courtroom in January as more than 150 sexual-assault victims confronted their abuser, Lawrence G. Nassar, the former team doctor for U.S.A. Gymnastics and an employee of Michigan State University. He had been committing his crimes for more than 20 years.

One by one over several days at Nassar’s sentencing hearing, the women rose and delivered their victim impact statements. Some were prominent athletes. Some were not, but all shared a common cause, emboldened in part by the #MeToo movement.

“Imagine feeling like you have no power and no voice,” Aly Raisman, an Olympic gold medalist in gymnastics from the United States, said in court. “Well, you know what, Larry? I have both power and voice, and I am only beginning to just use them. All these brave women have power, and we will use our voices to make sure you get what you deserve: a life of suffering spent replaying the words delivered by this powerful army of survivors.”

After all the goals and the touchdowns in 2018, that moment in Michigan far removed from any playing field is the memory that lingers: a searing reminder of all that can go horribly wrong as athletes, parents and administrators chase sporting excellence.

“How can this continue to go on for as long as it did, and why did so many adults enable it?” said Julie Foudy, former captain of the United States women’s soccer team. 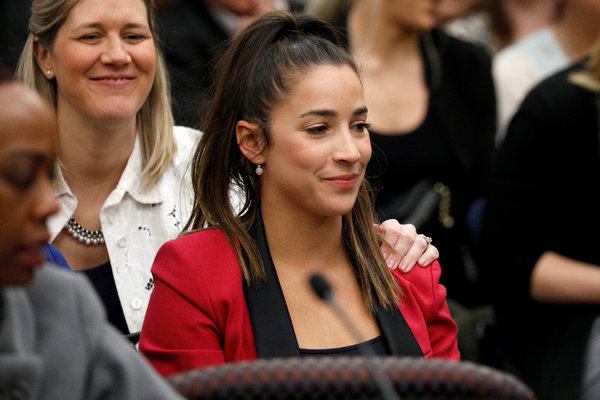 “At all levels, at U.S.A. Gymnastics, Michigan State, the U.S.O.C., there was an adult in the room who could have stopped it and they never did, and that’s something that’s hard to wrap your brain around.”

The fallout has been significant with the resignation of Lou Anna K. Simon, the Michigan State president, and the move by the United States Olympic Committee to initiate decertification of U.S.A. Gymnastics and build a new federation.

Far from the United States, the Afghan government is investigating allegations, reported by The Guardian, that players on Afghanistan’s women’s soccer team were abused sexually and physically by male coaches and officials.

The challenge now is to create long-term safeguards.

“I would love to believe there will never be a bad guy, but there are going to be bad guys and bad girls,” said Sarah Hirshland, the new chief executive of the United States Olympic Committee. “And we have to make sure that when there are, we very quickly have systems in place to find them, weed them out and get rid of them.”

Hirshland, appointed in July, is a symbol of systemic change as the first noninterim female chief executive at the committee. A former golf executive who has yet to attend an Olympic Games, her appointment was linked to the Nassar fallout, reflecting the need to bring in a leader from outside the Olympic world to scrutinize and reform the culture (and the organization’s image).

She was not alone in that regard.

The Dallas Mavericks of the N.B.A. brought in Cynthia Marshall as chief executive after a Sports Illustrated article revealed sexual harassment and misconduct in the team’s front office. Until Marshall’s arrival, the Mavericks had no women in executive positions, but Marshall has subsequently hired and promoted several, bringing the gender balance close to 50 percent.

Reaching that figure remains more goal than reality for many sports organizations. But the number of high-profile female leaders in sports is creeping upward, and none is more prominent than Susanna Dinnage, who last month was named to replace Richard Scudamore as chief executive of the Premier League, the leading men’s domestic soccer league and one of the world’s top sports properties.

“I think it’s absolutely a great sign, but again it’s slow in coming,” Foudy said. “As we’ve seen in companies and studies, when you have a diversity of thought around the table, the company performs better. They think differently. They are more progressive. They think openly, and you’re not seeing that on all levels.”

There were also less-formal signs of a shift in thinking about women in sports.

The practice of using models, known as grid girls, at Formula One ceremonies was ended by the sport’s owners, though some race organizers did not comply with the ban.

And Sandi Morris, one of the world’s best pole-vaulters, was at home in Fayetteville, Ark., last month when she received a message from her agent in Europe that she had gone viral in Germany.

It turned out that a billboard being used to promote a coming indoor meet in Düsseldorf had drawn concerns about sexism because it showed her from the rear in her tight two-piece competition uniform, pole in hand.

Morris had approved the image’s use in part because the promoters had told her they wanted to show her bib number with her name on it: female pole-vaulters wear their bibs on their backs. The promoters, under pressure, eventually chose to stop using the image and to continue promoting the February meet with a picture of Tomas Stanek, a German shot-putter, facing forward with his arms outstretched.

“I can understand why people who are not familiar with athletics would see that billboard and immediately think, ‘Oh my gosh, why are you showing that woman from this angle?’” Morris said. “But to me, it was just a picture of me standing there getting ready to compete in a uniform I chose.”

But even if Morris says she does not believe there was overt sexism in this case, she recognizes that the debate is important and a sign of change: a growing resistance to objectifying female athletes in a microcosm where it remains widespread.

“I’m not naïve to the fact that sexism is everywhere in sport,” she said. “If you just get on YouTube and type in women’s pole vault, the first thing you will probably see is one of our butts flying over the bar in an up-close image.

“It’s really hard, honestly. I’m from a conservative family, and so when I think about my parents wanting to find video of me, I just dread it. I’m like, ‘Oh my gosh, Mom. Just don’t go on YouTube, O.K.? I will send you the link to whatever you want to see.’”

Morris said it was disappointing to think that her appearance was more interesting to the public than the vaulting ability she had spent her life perfecting.

“Even though this meet had, I know, good intentions, I think that it will be a good lesson for anyone really who’s in marketing when they go to image choice,” she said. “Imagine that the person in the photo is a male. Would you still use this picture?”

There were also calls for an end to double standards this month when Ada Hegerberg was announced as the winner of the inaugural women’s Ballon d’Or award in Paris. In the midst of this breakthrough moment for women’s sports, she was asked by the French D.J. Martin Solveig if she knew how to twerk.

Hegerberg curtly said no and looked taken aback. But she later said that she did not perceive the comment as sexist, was not upset and that Solveig had apologized for what he termed “a joke, probably a bad one.”

“It’s not so much the dance that shocked me,” said Roxana Maracineanu, an Olympic medalist in swimming who is France’s new minister for youth and sport. “It was more remarks I heard in the crowd, like ‘On top of that, she’s pretty.’”

In Maracineanu’s view, work remains to be done in changing attitudes toward women’s sports: in improving the tone and volume of coverage, and in increasing the number of female coaches and officials as well as athletes. She will get a chance when the Women’s World Cup of soccer is played in France next year.

FIFA, the sport’s global governing body, has vowed to make the 2019 edition the biggest and best ever. But at the same time it has allowed the finals of two major men’s competitions — the Copa América and the Concacaf Gold Cup — to be played on July 7, the same day as the women’s final.

“FIFA talks a good game of, ‘Oh, we’re going to optimize and commercialize and build the market,’ and then they come out two weeks later with this,” Foudy said.

The struggle for equality, and occasional priority, continues, but there is no doubt that women’s voices could be heard above the sporting din in 2018.

Nowhere more powerfully than in Michigan.

“Leave your pain here,” Rosemarie Aquilina, the judge in the Nassar case, said to one of the victims as she opened the courtroom to those who wished to speak. “And go out and do your magnificent things.”