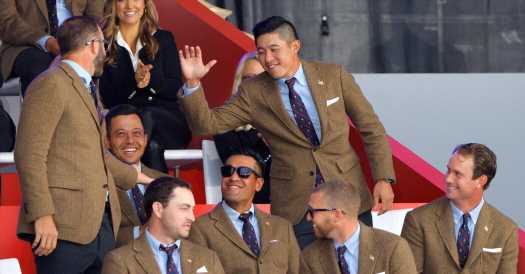 HAVEN, Wis. — Steve Stricker, the United States Ryder Cup captain, has not delivered a single rousing speech to his charges this week. He has also refrained from showing them motivational videos, which many of his predecessors liked to do.

When Stricker was a Ryder Cup competitor, as opposed to a nonplaying captain, he always thought those tactics just made him nervous.

At the 43rd Ryder Cup, which begins Friday morning, Stricker will rely on more elemental inspiration for his team: He has the youngest U.S. squad in decades, and he knows those players have spent most of their lives hearing about Europe’s sustained dominance in the event.

The Americans, eight of whom are younger than 30, have grown increasingly weary of that story line, and they do not need a speech or the blaring theme music from “Rocky” to rouse them. As Tony Finau, an elder of the U.S. squad at 32, said Thursday: “There’s extra motivation or extra drive to change the culture of American golf.”

Finau added: “Hopefully, the culture of us not getting the job done in the Ryder Cup changes this week.”

The Europeans, who have won four of the past five Ryder Cups, are understandably at ease, even a bit bemused by the disquiet and machinations among the Americans. There has, for example, been much intrigue about the makeup of the pairings Stricker chooses for the first two days, when there will be 16 team matches. Strategic American combinations have been debated and tried out during practices this week at Whistling Straits, the daunting golf course along Lake Michigan hosting the event.

The European players have instead played it loosey-goosey, practicing in indistinct groups that seemed to lack forethought. On Thursday, the Englishman Paul Casey explained: “We are so good, so comfortable with what we are going to do tomorrow, it’s like, why overthink it on a Tuesday, Wednesday or Thursday?”

But late Thursday afternoon at the event’s opening ceremony, as Stricker and the European captain, Padraig Harrington, named the pairings for Friday morning’s four foursome matches, some specifics finally emerged in the latest chapter of a biennial competition that dates to 1927 and was delayed one year by the coronavirus pandemic.

There were few surprises in the pairings for the Europeans, who often have countrymen competing together. For the initial match of the event, the Spaniards Jon Rahm and Sergio Garcia are teamed, as are Lee Westwood and Matthew Fitzpatrick of England.

Northern Ireland’s Rory McIlroy, who often responds well to an emotional, high-energy partner, was paired with England’s Ian Poulter, one of the most passionate and successful Ryder Cup players of this century. Harrington also chose to combine Casey, a Ryder Cup veteran, with a first-time player, Viktor Hovland, the first Norwegian to compete in the event.

On the American side, Stricker has appeared to lean toward the methods successfully employed by the American captain Paul Azinger at the 2008 Ryder Cup.

In what he called a “pod system,” Azinger divided his 12-man team into four-man units that would spend the pre-event period doing everything together, from eating meals to playing practice rounds before eventually being paired together in the competition. The hope was to develop a bond among certain groups of players that would be similar to the kind of unity the Europeans have seemed to naturally exhibit.

The four-man pods led to a runaway victory in 2008, the Americans’ first in nine years. Since then, Azinger’s approach has been largely abandoned. But based on the initial four pairings chosen Thursday, and the practice groups Stricker sent out the past three days, some four-man groupings seem to be forming on the American team.

The first pairing announced by Stricker was Justin Thomas and Jordan Spieth, who will play against Rahm and Garcia on Friday morning. The Thomas-Spieth combination was a rare bright spot of the Americans’ losing effort at the Ryder Cup in 2018, when the two were teamed four times in the first two days and won three times. Thomas and Spieth have known each other since childhood, when they competed in prominent junior golf tournaments, and they have become close friends as professionals.

While nothing will become clear until four more matches are played Friday afternoon and eight more on Saturday (the Friday afternoon pairings will be announced at the conclusion of the morning matches), the duo most likely to be in a four-man unit with Thomas and Spieth would be Patrick Cantlay and Xander Schauffele, who will be paired in the fourth match Friday morning against the McIlroy-Poulter team.

Cantlay and Schauffele are Ryder Cup rookies, but Schauffele won an Olympic gold medal this summer and has had nine top-10 finishes in major championships. Cantlay was recently named the PGA Tour player of the year after winning the FedEx Cup playoffs. At the 2019 President’s Cup — a team competition between the United States and a collection of international golfers from outside Europe — Cantlay and Schauffele played together and won in two of four team sessions.

The other American teams playing on Friday morning will be Dustin Johnson and Collin Morikawa, who will face Casey and Hovland, and Brooks Koepka and Daniel Berger, who will go against Westwood and Fitzpatrick.

Because they have been practicing together periodically this week, Johnson, 37, and Morikawa, 24 — the oldest and youngest members of the American team, respectively — have been viewed as half of one pod, perhaps along with Bryson DeChambeau and Harris English. Koepka and Berger would then be teamed in a pod with Finau and Scottie Scheffler.

The foursomes format on Friday morning requires players on a team to alternate hitting the same golf ball on each hole. The Friday afternoon format is four-ball, in which each golfer plays his own ball on each hole and a team wins a hole by having a player (or players) with the lowest score there among the four golfers in the group. Most holes are usually tied.