CHARLOTTE, N.C. — Stephen Curry was about 25 minutes into a news conference here on Saturday afternoon when a magician who goes by the name Jibrizy sidled up to the dais to do a card trick. Curry, the Golden State Warriors point guard, seemed impressed.

Lots of weird stuff tends to happen during N.B.A. All-Star weekend, and a cameo by Jibrizy was no exception. But it was also the rare instance when the spotlight left Curry, if only for a moment, in the run-up to the weekend’s flagship game on Sunday.

Curry, a six-time All-Star and two-time most valuable player who has already coaxed Golden State to three championships, is used to lots of attention. But he relished his return to Charlotte, where he grew up to become perhaps the greatest shooter of all time — and where he is still revered.

“From the time I started playing basketball at 5, right down the street at the recreation center, to now, a lot has happened,” Curry said. “A lot of great things.”

Curry was not so great Sunday, but that was not the point. He finished with 17 points, 9 rebounds and 7 assists for Team Giannis in a 178-164 loss to Team LeBron in the All-Star Game, which was a defense-free postscript to a weekend that was a Curry family affair.

“Incredibly fond of the family,” Commissioner Adam Silver told reporters. “They seem to be the first family of Charlotte, at least this week.”

For much of his trip home, Curry was accompanied by his father, Dell, who spent 10 seasons playing for the Charlotte Hornets, and his mother, Sonya, who drilled a half-court heave after the family helped refurbish a community center. It was probably the family’s splashiest shot of the weekend.

“I was surprised,” Stephen Curry said, “because the first four she flung underhand, they didn’t make it to the rim. And then that last one, it just looked good from the moment it left her hand, and I was going, ‘Wham, bam, can of ham! That’s going in!’ ”

Curry had less success in Saturday night’s 3-point shootout, where he was joined by his younger brother, Seth, who plays for the Portland Trail Blazers. Stephen Curry made it to the championship round before losing to Joe Harris of the Brooklyn Nets.

But Curry had also found time to return to Davidson College, his alma mater, where he clambered into the student section to celebrate an 80-72 victory over St. Joseph’s on Friday night.

“The energy in the building was unbelievable,” Curry said. “It’s surreal every time I get to go back there.”

The following afternoon, Curry swayed in a sea of reporters (and at least one magician) as he fielded a wide-ranging mix of questions.

What did it mean to him to be back in Charlotte? “It’s kind of overwhelming to be honest,” he said. “I’ve got to be like the Energizer bunny.”

Could he say something nice to all his fans in the Dominican Republic? “I’ve been there, and I hope to go back,” he said.

Did he have a favorite basketball-themed movie? “Probably ‘Love & Basketball,’ ” he said. “I’m a romantic, bro.” 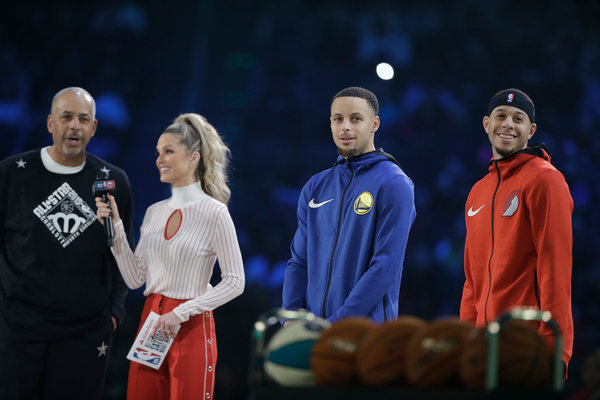 During warm-ups for Sunday’s game, Curry mimicked a game of volleyball with Philadelphia 76ers center Joel Embiid, posted up a ball boy so that he could take an entry pass from Oklahoma City Thunder point guard Russell Westbrook, made chitchat with bigwigs who were courtside and jacked his share of 30-footers. Most of them went in. All-Star weekend is a circus, but it is still basketball, after all, and Curry has unique skills.

He is assembling another spectacular season, even if his work has been overshadowed by fellow All-Stars like James Harden of the Houston Rockets, Paul George of the Thunder and Milwaukee’s Giannis Antetokounmpo. Curry has been so consistently good for so long now — and his team so dominant — that perhaps some of the novelty has worn off. It is unfair, of course.

If his feats feel too familiar, consider his production this season: 28.6 points, 5.2 assists and 5.1 rebounds per game while shooting 48.8 percent from the field and 44.4 percent from 3-point range. He missed 11 games with a groin injury but spent part of that time gluing the Warriors’ locker room back together after Kevin Durant and Draymond Green had a big dust-up.

The friction stemmed from Durant’s looming free agency, which has been a steady hum of distraction for the Warriors. But Curry has been a stabilizing force for his team — and even for the league.

With a contract that runs through the 2021-22 season, Curry has not had to face pressing questions about his future. He is committed to the Warriors, and the Warriors appear committed to him. He is a throwback in an era dominated by player movement, the current face of which is Anthony Davis, the All-Star center who recently requested a trade from the New Orleans Pelicans. So many other stars face uncertain summers, too: Durant, Kyrie Irving and Kawhi Leonard among them.

But Curry has his niche in Northern California, even if his roots are in North Carolina. After Sunday’s game, he described trying to persuade his father to move to the Bay Area, where Curry has settled in with his wife, Ayesha, and their three children.

Dell Curry, who is a color commentator for the Hornets, always says no.

“This is where home is for him,” Stephen Curry said.

And for Stephen Curry, the whereabouts of his father seem to be the only player movements on his mind. Curry said he was unconcerned with free agency this summer and the potential departures of his teammates.

“That’s a part of the business,” Curry said. “But the great teams, the great players, they stay in the moment and they understand what’s in front of them.”

And so, after taking a weekend to dip into his past, Curry returned to looking ahead. The journey goes on.