AUGUSTA, Ga. — The men met for dinner at Augusta National Golf Club on Tuesday night. They donned their green jackets, asked after grandchildren, cracked wise, drank wine and thought back to the long-ago shots that were their meal tickets now.

They gathered because that is what most men who won the Masters do during tournament week. And despite the coronavirus pandemic, it was unfathomable to many of golf’s princes that they would miss a meeting of one of the most hallowed fraternities in sports.

“I’m going to put my mask on and drive over there,” Tommy Aaron, the 83-year-old champion from 1973, said by telephone last week, his voice as soft as his intentions were firm.

“You never know when your last trip to Augusta is going to be,” observed Charles Coody, 83, who won in 1971.

“I don’t get to see the guys too often anymore,” said Bob Goalby, the 1968 champion who is now 91. “What brings you back is your friendship with the guys. Even though you don’t play anymore, you get kind of enthused about seeing the place and seeing the young guys practice on the range.”

No other golf tournament attracts its most cherished alumni quite like the Masters, and many former champions submitted to nasal swabs to be able to gaze upon the greens again. Some older winners — more than half of the 33 living Masters winners are at least 60 years old — considered walking part of the course, free of dense crowds because of the pandemic, for the first time in years. 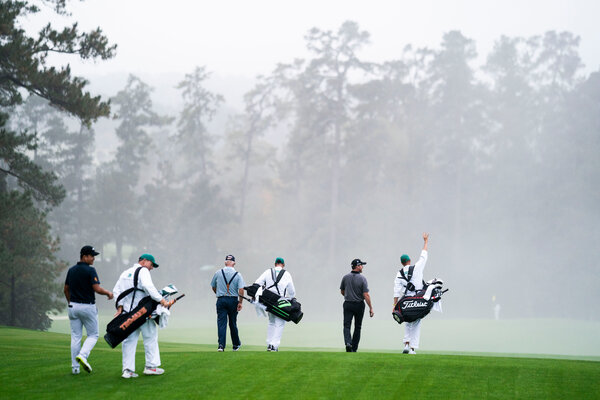 Still, seven winners are absent this week, with at least some missing for pandemic-related reasons, including misgivings about travel. Sergio Garcia, the 2017 victor, withdrew from the tournament after he tested positive for the virus.

"It’s always sad when some people are not there, but to look at it in a positive light, so many were there,” said Gary Player, 85, who won the Masters three times and spoke at Tuesday’s dinner.

Indeed, the pandemic hardly seemed to rattle most of the winners, many of whom saw the golf and Augusta’s traditions as too great to ignore, even in 2020. Sixteen past champions are playing this week and even though Player and Jack Nicklaus are not, they started the tournament with a ceremonial tee shot around daybreak on Thursday. Nicklaus and his wife, Barbara, tested positive for coronavirus in March.

“I just played three months in a row, so why wouldn’t I come here?” asked Bernhard Langer, who turned 63 in August and won in 1985 and 1993. “I can social distance. I don’t have to hug anybody or whatever or do high-fives.”

Others who are competing had feared that they would not make it because of travel restrictions.

“It seemed very hard because I was marooned in Scotland for seven months, eight months,” said Sandy Lyle, the 1988 champion. But there he was at sunset on Monday, practicing putts and hoping to string together sufficiently low scores to make the Masters cut, set this year at the low 50s, for the first time since 2014.

“We’re still getting through this,” Lyle, 62, added about the pandemic. “We’ve got to be very happy that we’re even playing golf for prize money right now.”

So to look around Augusta National this week was still to spot winners, an exercise made easier than usual because of this year’s ban on spectators. Fred Couples, the 1992 winner, and Tiger Woods practiced together, as did Langer and Lyle. A few minutes after Vijay Singh, the champion in 2000, started hitting at No. 1 on Tuesday morning, Patrick Reed, who won 18 years after Singh, started a round from nearby No. 10.

More came for the Champions Dinner, a closed-door rite of the tournament for past winners and the club chairman.

“Once I found out that I knew a lot of the players were going, some of the older ones, I was all in,” said Mark O’Meara, who won in 1998 and was among those who flew to Georgia this week. “To be fortunate enough to be a Masters champion, it’s probably the right thing to do, even though I’m not going to play.”

Tuesday’s dinner, paid for by reigning champion Woods, included his menu selections of sushi and fajitas. This year, to allow for more distancing, the men dined in the clubhouse’s Trophy Room instead of its library, the place settings spaced farther apart than in the past.

“You almost had to holler across the table, so it got a little noisy in there,” Goalby said on Wednesday afternoon. “But it was still the same dinner, same thing.”

In the hours and days before the meal, younger players with standing invitations — the new guard of champions — said they were unsurprised that the game’s elders had made the trip back.

“What a pleasure to talk to these guys and hear stories,” Bubba Watson, who won in 2012 and 2014, said as he recalled his hosting stints. “One day, 40 years, 30 years from now, I’ll be the guy telling random stories.”

That recounting is part, many older winners said, of a sentimentality that they cannot ever seem to shake, no matter how long ago they won a green jacket.