The German midfielder may join the iconic list of players synonymous with their own signature move, from the Cruyff turn to the Ronaldo Chop. 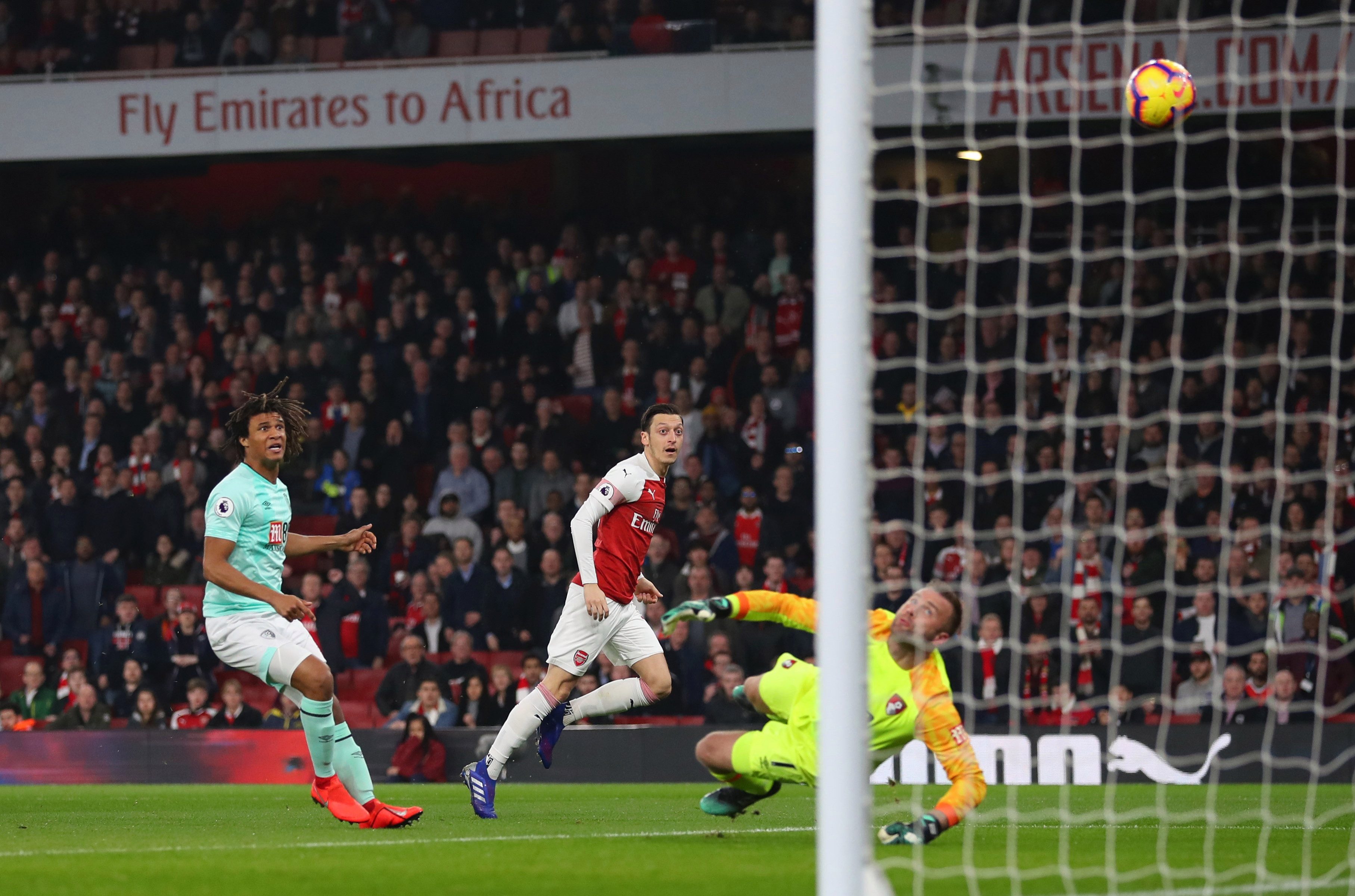 As Bournemouth stopper Artur Boruc tried to close him down, Ozil kicked the ball into the turf to send it spinning over the Pole's head.

While the former Real Madrid star has already built a reputation for his eye for a pass, the 30-year-old may be creating a legacy for his ingenuity in front of goal. 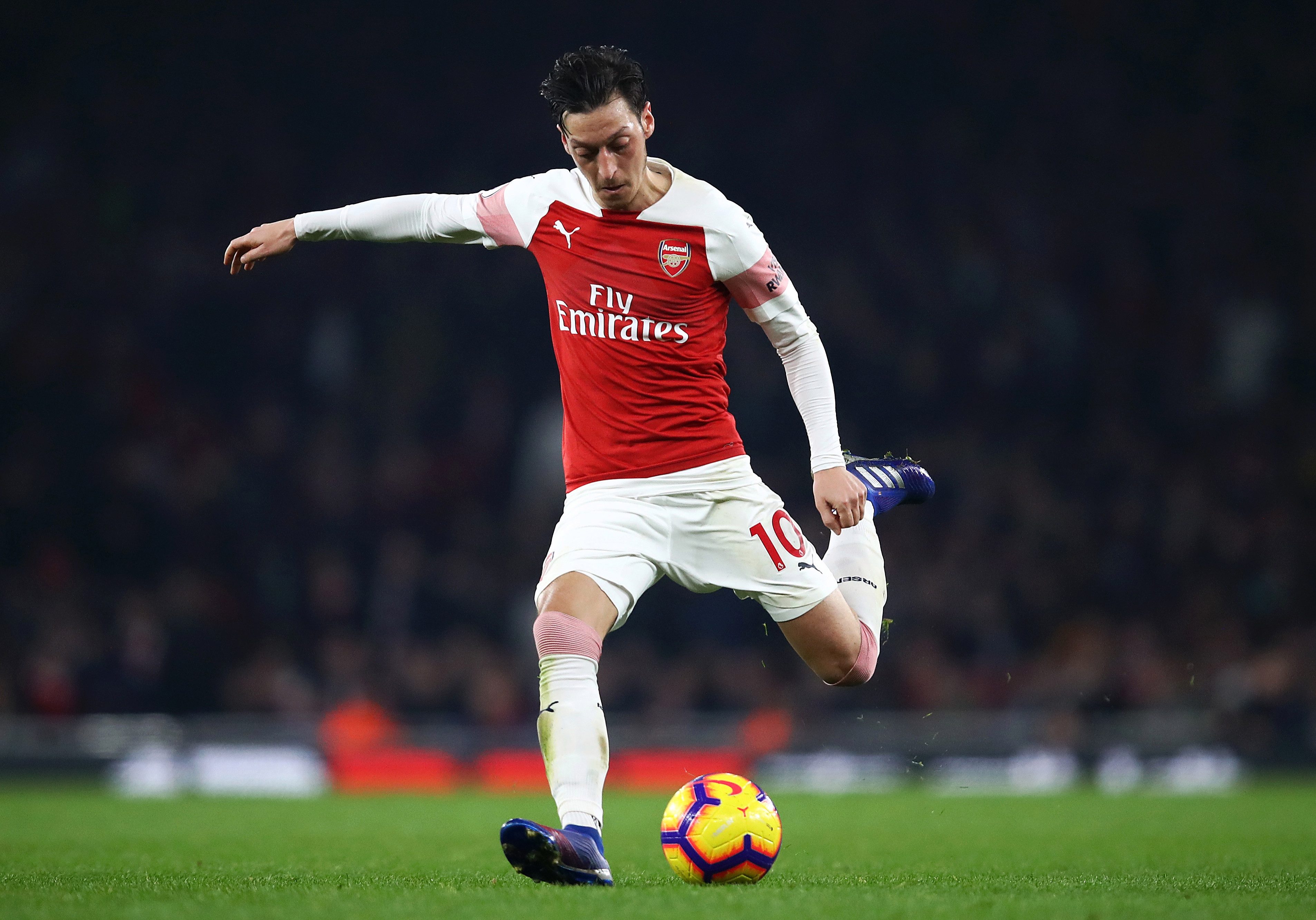 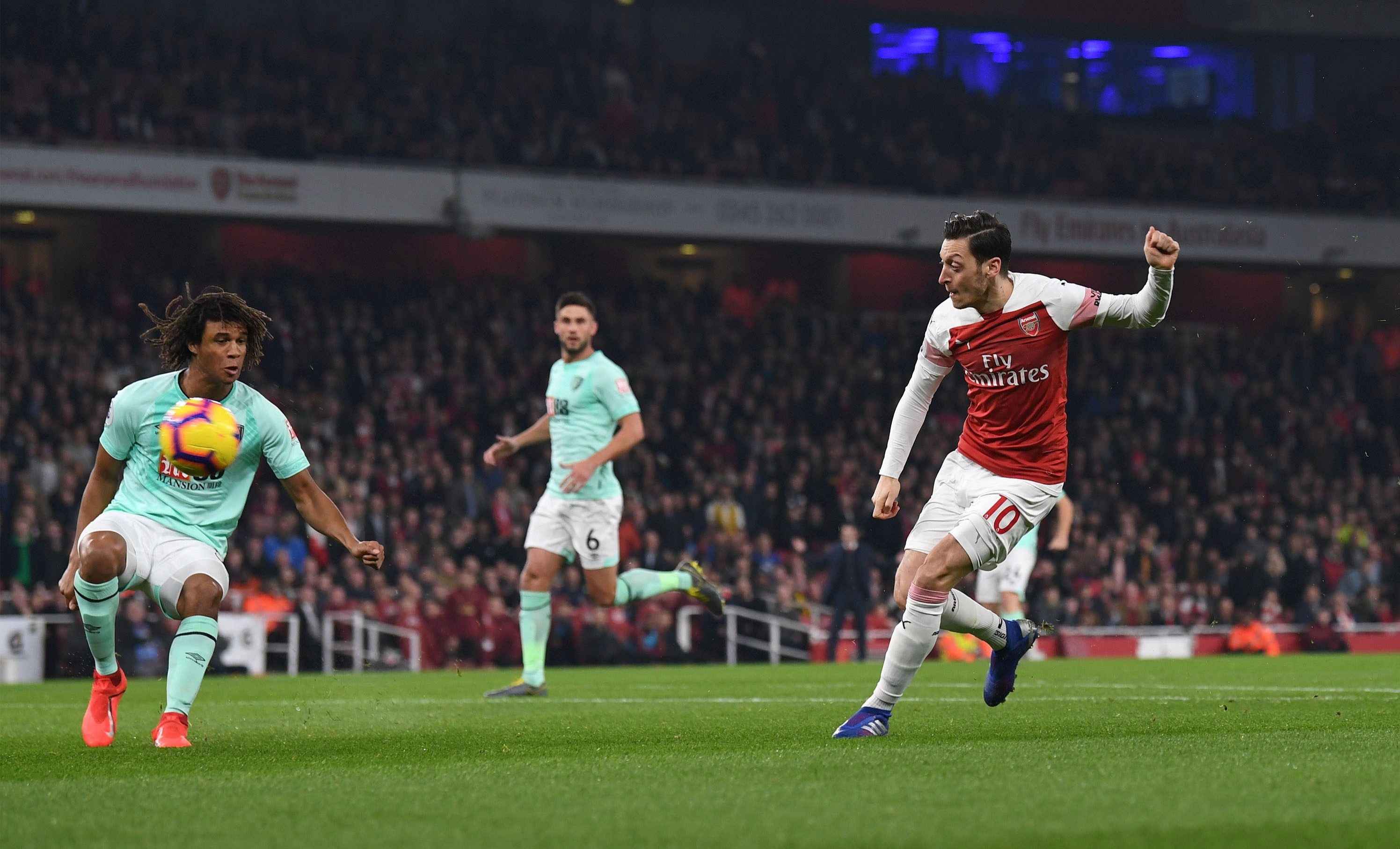 To the naked eye, it seemed as though Ozil's opener against Eddie Howe's side was a routine chip that top-class players have utilised many times in one-on-one situations.

However, the Arsenal star had not slid his foot under the ball to gain its height but had instead trapped it against the turf with his in-step to maintain the element of surprise.

The finessed shot also doesn't require the German playmaker to arch his back like he would chipping the ball, meaning goalkeepers are expecting the ball to stay low.

Not only did the move bamboozle Boruc in goal, but Ozil also best Huddersfield keeper Jonas Lossl and Liverpool's Simon Mignolet with the unique finish over the past year. 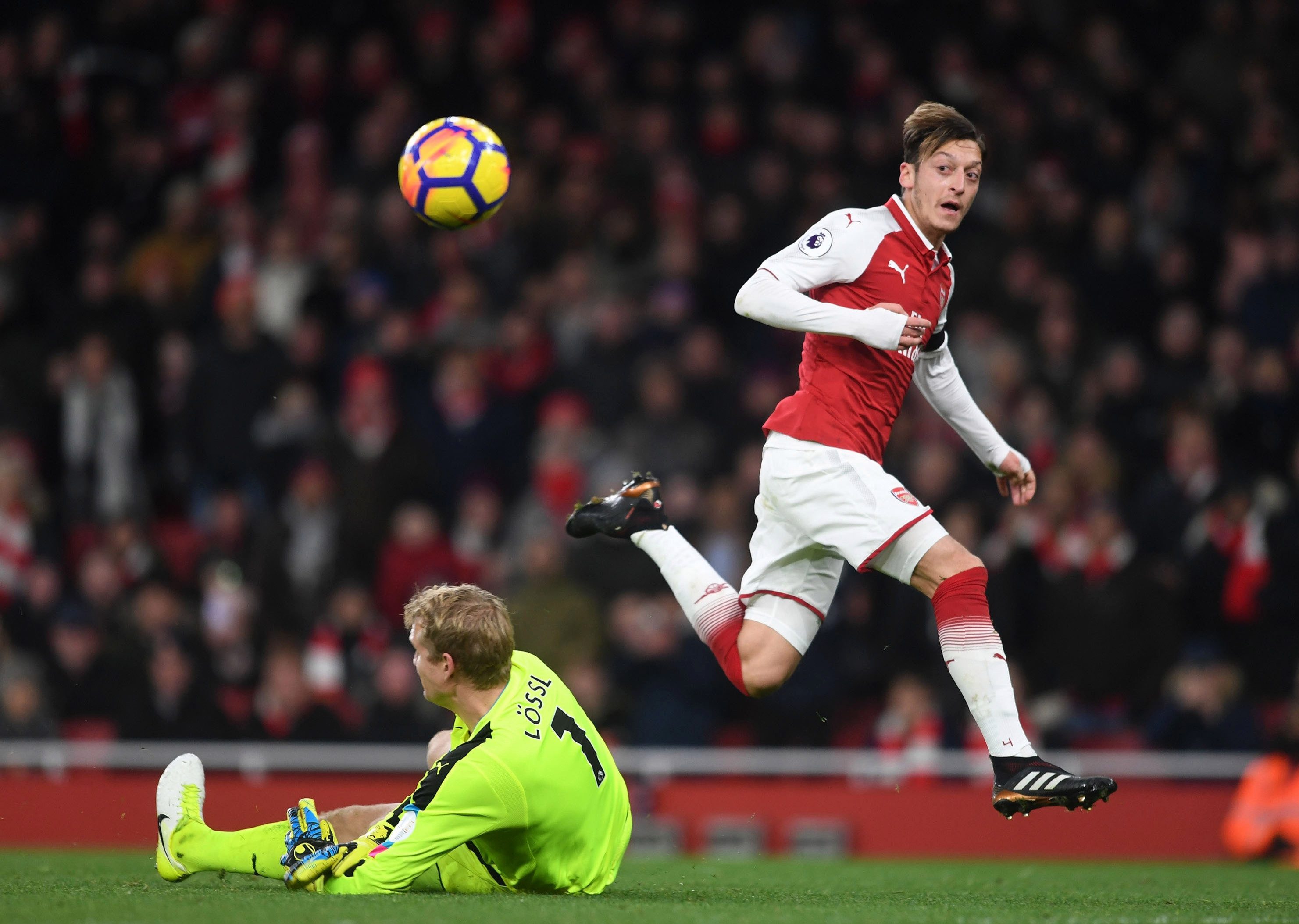 The move is more reminiscent of a golfer pinching a ball between the clubface and the green, as footballs also respond to downward pressure by spinning high in the air.

The topspin enables the ball to gather pace as it heads towards goal, rather than a lofted finish that takes all the pace out of a forward pass.

Many covering defenders have been able to bail their goalkeepers out of the embarrassment of being dinked by clearing the slowed ball before it crosses the line.

Yet Ozil's bounce finish imparts topspin on the ball, rather than the backspin of a typical chip, meaning that no defenders stand a chance recovering the ball.

Goalkeepers may be the prime targets for the Ozil dink, but the move was first used by the mercurial German as a through-ball seven years ago.

Ozil's bounced pass through to Sami Khedira in the Euro 2012 match against Denmark bisected two defenders to find his former teammate in the penalty area.

The skill, which was instantly adulated by his many fans online, is such a difficult ball to prevent as it travels at an extremely awkward height for defenders to deal with.

The ball travels too low for any Danish defenders to head away, and at shoulder height, is very easy to handball. 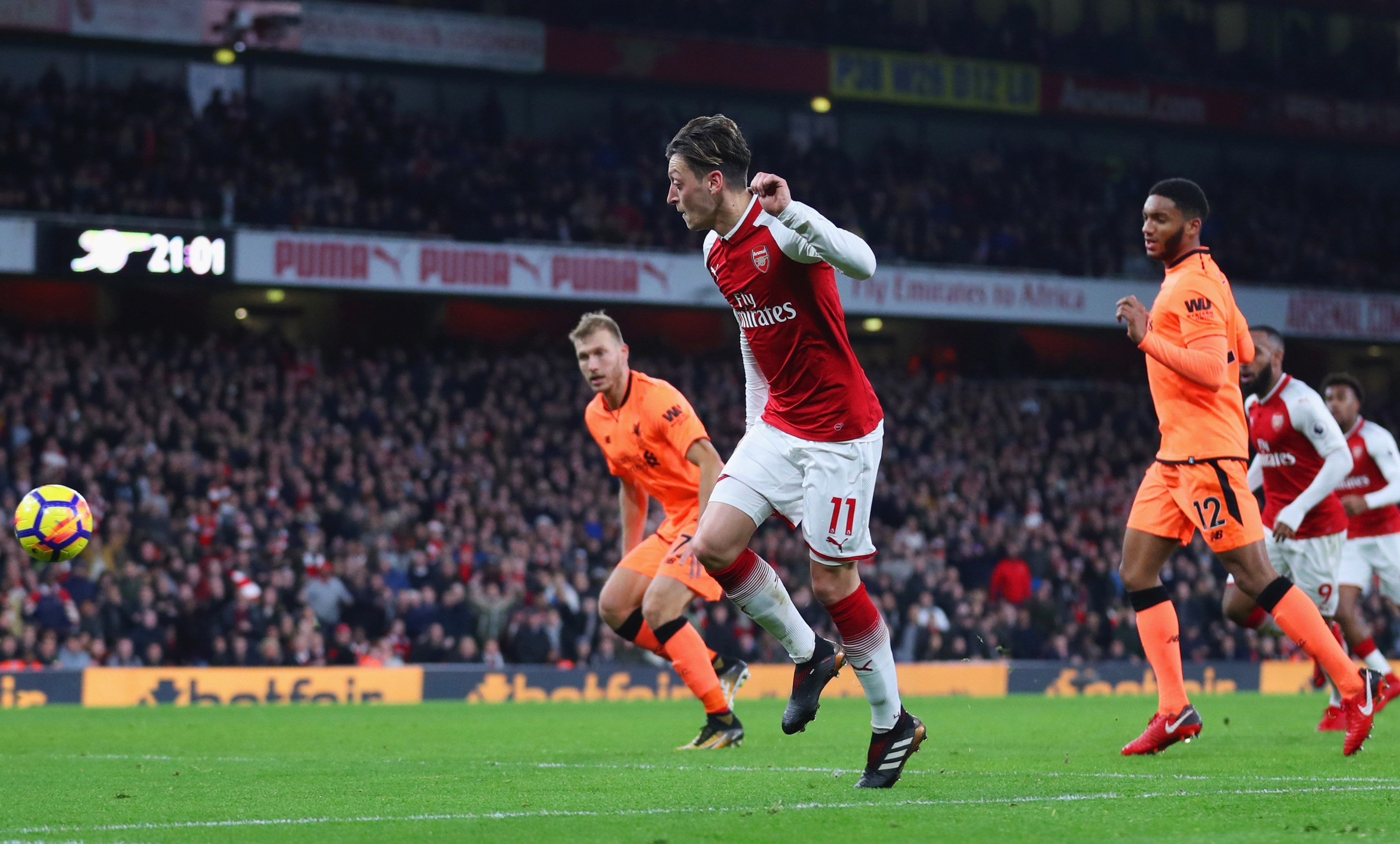 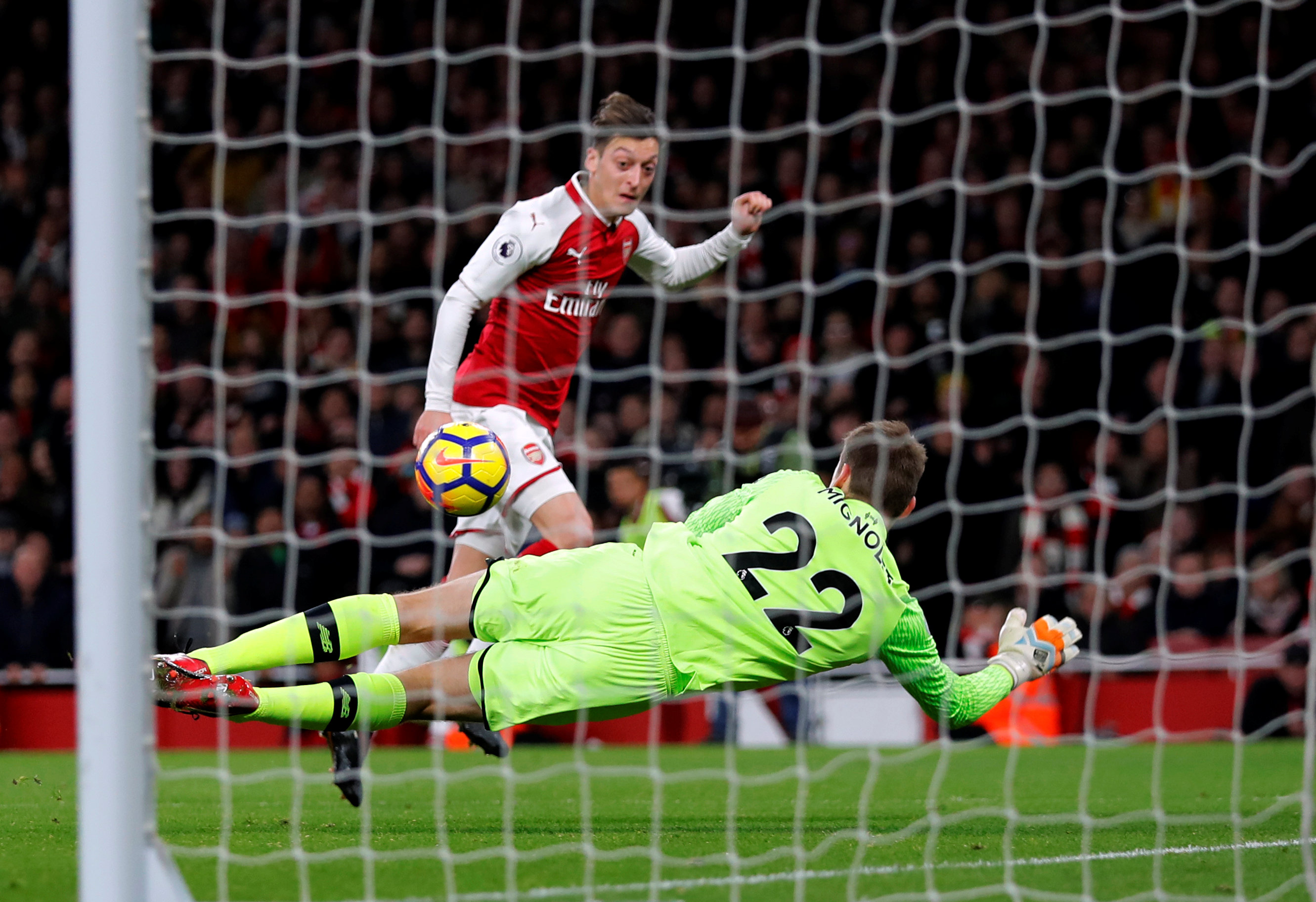 4. Doesn’t have to check stride

Ozil already possesses the element of surprise over unfortunate goalkeepers with the dink, but it also costs him little effort to adjust his own body in order to execute it.

The former Real Madrid man does not have to check his stride as he approaches the ball, another advantage over a conventional chip that forces players to slow down.

Ozil is afforded the opportunity to continue his run, almost as if the ball is blocking his path, before squeezing it against the pitch and up and over Boruc in one. 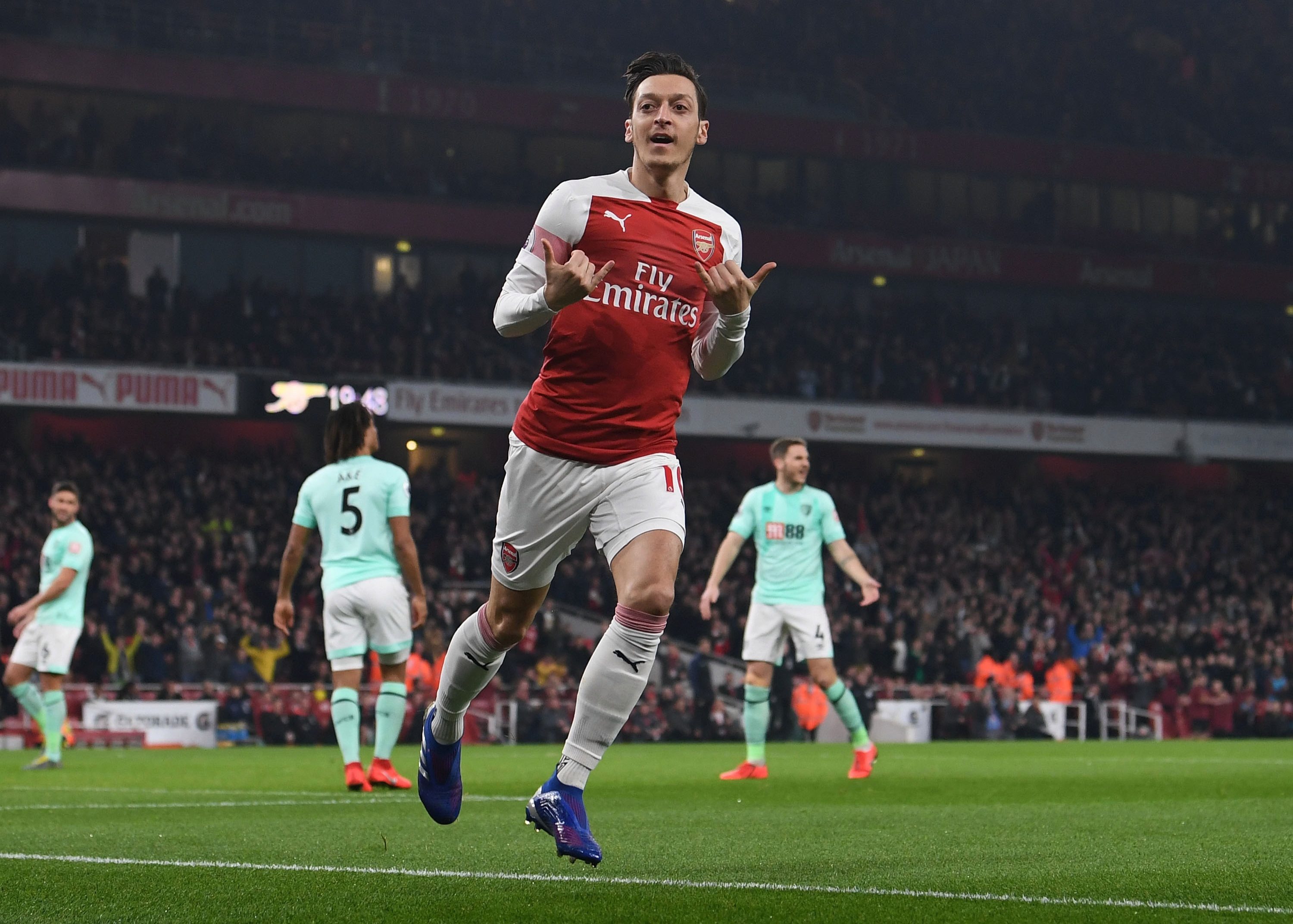 For all his qualities, Ozil also has a long history of over-complicating, whether it be over-playing a pass or attempting an unnecessary skill in a bad area.

The former German international grew up in what is now known as "Mesut's ape-cage", the fenced-off concrete pitches on Olga Strasse in Gelsenkirchen.

Players are forced to rebound the ball off the walls surrounding their game, giving a young Ozil such an advantage now of how he can manipulate different spins.

Instead of any pragmatic reason Ozil has for producing his own trick, the skill may not be too dissimilar from his ability to play keepy-up with chewing gum, in that he just loves to showboat.