The five key moments of the Big Bash League final at Marvel Stadium: 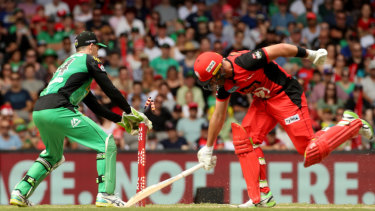 Dan Christian of the Renegades in action as Peter Handscomb of the Stars takes the bails off.Credit:AAP

* The Stars were cruising at 0-93 but leggie Cameron Boyce changed the complexion of the contest when he bowled Marcus Stoinis (39 off 38 balls) – the first time the man known as the "Hulk" had been dismissed by the Renegades this season. It was a pivotal moment. Boyce followed up by having an in-form Ben Dunk caught at long off.

* Fast bowler Chris Tremain has had a patchy tournament but he shredded the Stars' top order when Peter Handscomb (0 off 2 balls) panicked and skied a catch to mid off. He then delivered the prized wicket of Glenn Maxwell (1 off 6 balls), snapped up at deep mid-wicket. This left the Stars at 4-99. Tremain had been dropped earlier in the tournament because he had been unable to restrict runs late in the innings – but he proved his worth in the final. "This was the unloseable game," Shane Warne, the former Stars skipper and now Fox Cricket commentator, said. 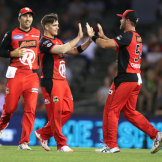 Having a ball: Leg-spinner Cameron Boyce (middle) celebrates a wicket for the Renegades.Credit:AAP

* The Stars still had some chance despite their sudden troubles but Dan Christian ensured the Renegades maintained the upper-hand when he had Seb Gotch and the hard-hitting Dwayne Bravo caught. Christian (38 off 30 balls) had also played a key role with the bat, sharing in an unbeaten 80-run stand with Tom Cooper after the Gades had tumbled to 5-65. He was clearly the player of the match.

* The Renegades had batting issues of their own which had them initially on the back foot. Aaron Finch had finally looked his old self, driving down the ground with aplomb but just as he threatened a major knock calamity struck when he was run-out at the non-striker's end. On the final ball of the power play, Cameron White drove Jackson Bird but the ball rebounded off the fast bowler's shin and on to the stumps, leaving Finch, who had backed up too far, short of the line. Finch's frustration was obvious when he twice smacked a chair in the tunnel on the way to the dressingroom.

* Leg-spin has increasingly become a key weapon in T20 cricket – and the Stars have two fine exponents. At a time when the Renegades were desperate for momentum, Adam Zampa – Australia's ODI leggie – claimed 2-21 of four overs while Nepalese star Sandeep Lamichhane conceded only 16 runs off four overs.