Chris Fagan says the onus is on those up the ground, not Brisbane's back six, to put the skids on Collingwood's attack on Thursday night.

The Thursday clash will be the first AFL sell-out at the venue since 2010, with the Lions (3-1) creating plenty of buzz thanks to an encouraging start to the season.

Dayne Beams' Gabba return is a major talking point but Collingwood (2-2) boast an array of stars and will provide another stern test after Essendon found a way through the Lions' defences at the MCG last weekend.

Fagan said the Lions' last line wasn't to blame as he challenged his troops further up the ground to put the clamps on Collingwood's midfield.

"No, defence is all about a whole team, it's not about who the back six are," he said of any potential match-up issues.

"The games that we've won, we've played incredibly well up the ground to defend … we didn't do that well enough last week." 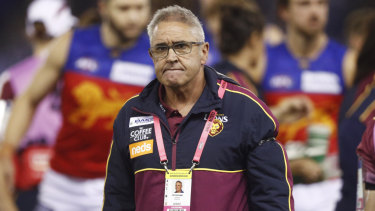 Lions coach Chris Fagan’s side will run on to the Gabba in front of a sell-out crowd for the first time since 2010.Credit:Daniel Pockett/AAP

Fagan was happy enough with the side's second half at the MCG after the Bombers had already surged away from them.

He said Thursday's showing would reveal if they had learnt from the experience.

"It's a tough competition and it's a rollercoaster ride and it's all about your ability to respond to whatever happens to you the previous week, whether that's a win or a loss," he said.

"Keep your equilibrium … (and) come out a better team the next week.

"That's how we've approached this week, which is no different to the other previous weeks because there's always lessons to learn."

Fagan hopes the Easter Thursday date with the Magpies at the Gabba becomes a regular fixture.

"I think it'd be fantastic – we'd certainly like to be part of those opportunities – tomorrow night our performance is really important because we'd love to have that as a regular event," he said.