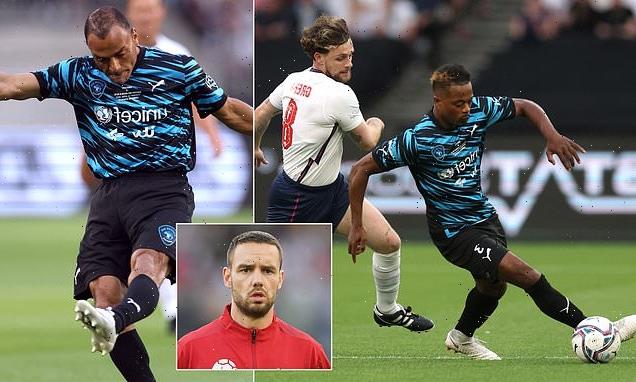 Soccer Aid LIVE: Follow all the action from the star-studded match at the London Stadium with Gary Neville, Jamie Carragher, Usain Bolt and Cafu among the famous faces lining up for charity

Here is Sportsmail’s live blog for updates on this year’s Soccer Aid as England and a World XI go head-to-head at the London Stadium.

Chunkz, who has just been introduced, produces a clumsy foul on Patrice Evra and Noah Beck will have the chance to give the ROW the lead from the spot.

Noah Beck receives the ball and opens his body up in space like a true pro and finds Patrice Evra on the left flank with a glorious Hollywood pass. Evra advances up the wing and finds Usain Bolt in space who unleashes a nice effort with his left foot that David James is good enough to tip over. Good save.

England have grown into this and have edged the possession over the last five minutes. Tom Grennan has been the best player on the pitch by some distance. Great touches and is drifting all over the pitch to help out and carry the ball forward. Currently Cafu can’t deal with him.

Great story, the one involving Brooker. He has become Soccer Aid’s first ever disabled player.

He is now speaking to Alex Scott and he seems overwhelmed at who he was trying to mark. ‘What an amazing experience,’ he tells Scott. ‘I’m so proud.’

Great save from Cech. Grennan unleashes a drive from around 25 yards which the ‘keeper is good enough to put behind for a corner.

That comes to nothing.

England’s front two are beginning to look a bit less isolated. Shame the same couldn’t be said for Crouch and Owen all those years ago.

Sheringham gets the ball up to Grennan whose loose touch somehow ends up at the feet of the former West Ham – among many others – man.

Pitch-side interviewer Alex Scott’s discussion with Idris Elba on the bench reveals that Roberto Carlos did not want to play for too long but did his bit in the first eight minutes. That’s nice of the Brazilian.

The fastest man of all time is looking ominous. It would be wise for one of England’s defenders to start picking him up.

Roberto Carlos is the first to depart, for Dimitar Berbatov.

That is a foot race Carragher will not win tonight. Usain Bolt won three gold medals here in 2012, and looks to be quick off the mark. His touch lets him down, however. 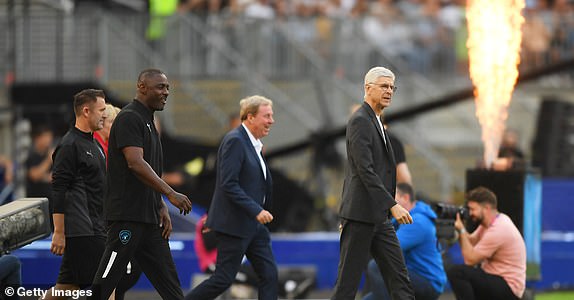 Patrice Evra swings in the corner and it is well defended by England. All eyes on how Neville and Carragher shape up here against an exciting ROW forward line.

Tom Grennan finds himself in space around 30 yards from goal and tries an outrageous lob over Petr Cech but of course the former Chelsea and Arsenal man is better for it. It barely reached his waist, to be fair.

Mark Noble, who it could be said it’s a bit unfair he’s playing, he only retired last month, goes on a nice mazy run. This is a far cry from his last appearance at this very stadium, when he was left in tears by the touching tribute of West Ham fans.

Rest of the World have started the better of the two sides here, with the ball getting played up to Usain Bolt whose control slightly lets him down. It ends up at the feet of Cafu who drags his shot wide of David James’ far post.

England kick us off

We haven’t seen this since last summer. A car delivers the ball to referee Mark Clattenburg. Unlike last summer, however, the car is actually driven by a child and not remote control.

This being ITV, it is advert central. Almost there…

Having won back-to-back Soccer Aids in 2016 and 2018 for the first time since the first two editions of the charity event, England have not won since. Some fighting talk from Damian Lewis, who is competing in his first for four years, prior to the start got the hairs standing up on the back of the neck.

It will be a tough ask, with the likes of Andrea Pirlo and Cafu, the Rest of the World do possess a stellar line up.

The fans are ready and we are merely moments away. 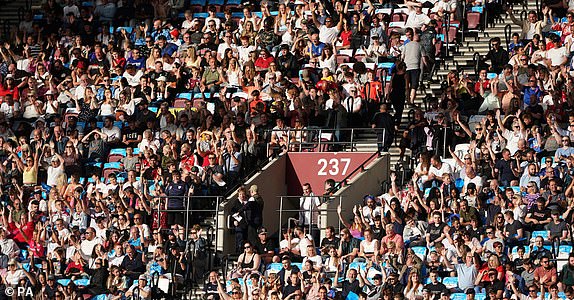 Arsene Wenger leads out the Rest of the World while Harry Redknapp brings out England alongside Emma Hayes. I would hazard a guess that this will less tetchy than their last meeting, which came in the North London derby around 10 years ago. 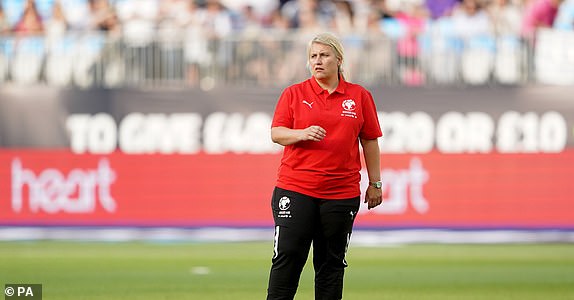 Sam Matterface is not joined by Lee Dixon, instead its the turn of Love Island narrator Iain Stirling.

Here we go then.

Undeniably, the fitness of some of the celebrities – and admittedly, some of the ex-pros – is always one of the most entertaining sights of the game. Who do we think is going to be up and down like a Rolls Royce and who is going to be struggling after a few lung-bursting runs?

Mark Wright is always impressive in this and as Maya Jama just revealed, takes this event more seriously than anyone else.

Jamie Carragher and Gary Neville both keep themselves in very good shape and a video they did with PGMOL referees a few years ago displayed their fitness. Jon Moss could not keep up with them in the bleep test. Teddy Sheringham looks decent too, expect him to get across the near post to tuck one in.

For the Rest of the World, Mo Gilligan should be interesting while the star studded back line containing Cafu and Roberto Carlos will of course be a sight to behold. 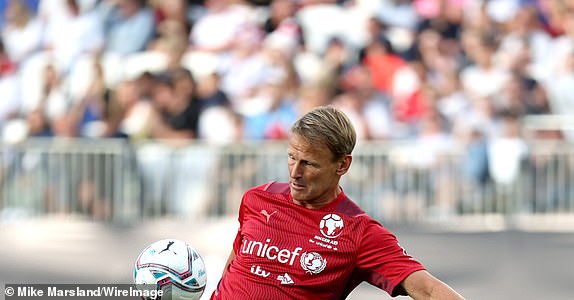 Amid all the celebrity and hilarity, it is important to not get away from what this event is really about. Raising money for those who truly need it.

Watch this video from UNICEF themselves to better understand the event and the invaluable work it does.

Idris Elba and Vicky McClure are currently sat on the ITV sofa pitch-side discussing their two sides. McClure is on the England coaching staff while The Wire star is managing the Rest of the World.

McClure has said that she tried to get Elba to stay late in the bar last night, but no dice, with the Arsenal fan taking his coaching role alongside his hero Arsene Wenger extremely seriously. 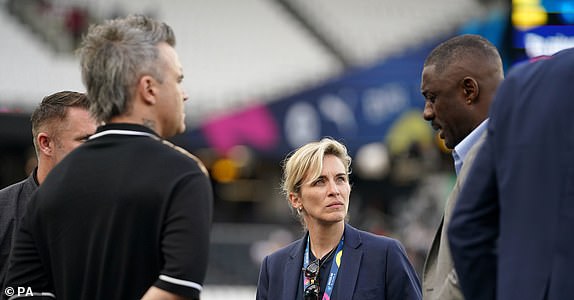 Continental 433 for the Rest of the World. England will, of course, be going 442. Proper. 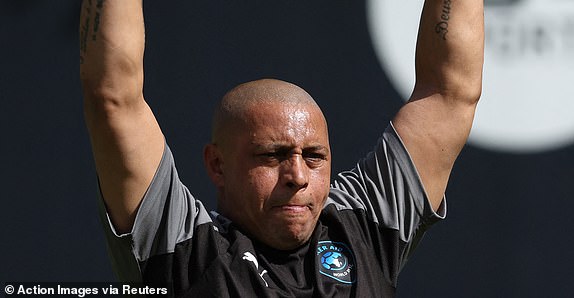 It does fly under the radar what a great event Soccer Aid is. David Beckham and Damian Lewis together will always be a sight to behold. Both are looking sensational it must be said. 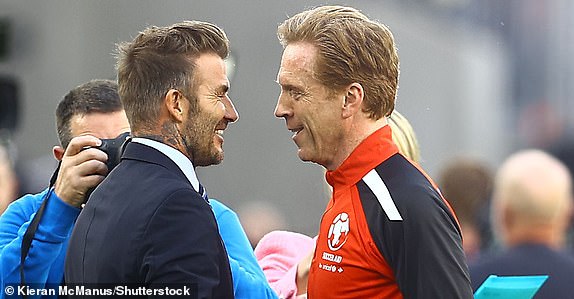 Gary Neville and Jamie Carragher in the same back line? That is fun. Perhaps even more fun than England’s drab draw with Italy last night.

Who is involved this year then?

Well, the usuals: Damian Lewis for England, Cafu for the Rest of the World. While comedian Alex Brooker will become the first disabled player to take part in the event.

The management teams are quite something, too. Harry Redknapp in the England dugout and Arsene Wenger taking charge of the rest of the world.

Founded in 2006 by Robbie Williams and Jonathan Wilkes, the charity event has raised over £38m for UNICEF UK. An amazing achievement.

Usually preceding a tournament, happening every two years, this year’s edition of course is a few months before the World Cup kicks off in Qatar, owing to, you know, the current 50 degree temperatures in the Middle East.

Line-up reveals should not be too far away, host Dermot O’Leary has just told us on ITV and we will have those for you as soon as they are available.

Good evening and welcome to Sportsmail’s live blog of tonight’s Soccer Aid at the London Stadium.

The great and the good have all descended on East London for the latest instalment of everyone’s favourite charity football match. So join us as we run you through all of the moments: the goals, the fouls, and, yes, even the comical pulled muscles.