Pakistan answered Tom Banton’s maiden T20 international fifty with a flurry of wickets to leave the first Vitality T20 tantalisingly poised before rain forced the match to be abandoned.

Banton, opening in the absence of the injured Jason Roy, accelerated after a cautious start to strike five sixes in an impressive knock of 71 from 42 deliveries at Emirates Old Trafford.

His downfall, however, sparked a collapse in which England lost four wickets for just 14 runs and the momentum was with the tourists when bad weather interrupted at 131-6 off 16.1 overs.

Put into bat, England struggled to get going after losing Jonny Bairstow in the first over – left-arm spinner Imad Wasim (2-31) accepting a low return catch – and took 49 balls to post fifty in the face of an accurate attack.

Banton enjoyed a reprieve on five when he was dropped at slip by Iftikhar Ahmed off Shaeen Afridi and Pakistan continued to turn the screw, limiting the home side to just three fours in the first four overs.

At the end of the powerplay the scoreboard showed 34-1, England’s lowest six-over score for four years since the 2016 World Twenty20 final, only for Banton to change the pace of the innings.

The Somerset batsman despatched Shadab Khan’s first ball high over midwicket for six and swatted the leg-spinner for two more maximums in the ninth over as he added 71 for the second-wicket with Dawid Malan (23 off 23 balls). 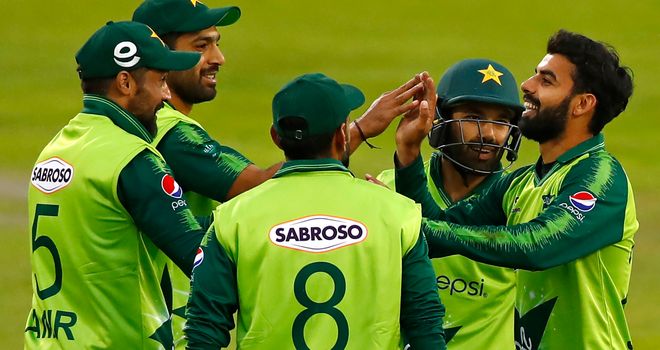 The loss of Malan – run-out in a mix-up after Banton had declined a sharp run to Mohammed Hafeez at backward point – failed to slow the momentum, with Banton reaching his half-century off 33 balls.

A fourth six, off Imad over wide long on, was bettered by an audacious scoop off Haris Rauf as England’s second fifty of the innings came up off just 19 deliveries but his departure proved pivotal.

Shadab (2-33) was the catalyst, inducing a leading-edge from Banton, and Eoin Morgan (14) quickly followed when he was trapped lbw on the sweep by a full Iftikhar delivery.

Moeen Ali contributed just eight, well caught at the second attempt by Mohammad Rizwan as he dived forward to take a thin edge after initially spilling the chance.

Wicketkeeper Rizwan, preferred in the side to former captain Sarfaraz Ahmed, stayed in the game as he stumped Lewis Gregory as he advanced only to miss an Imad delivery.

The rain put paid to England’s innings and encroached on Pakistan’s to such an extent that play had to get underway by 9.19pm to permit a five-over match.

With 30 minutes to spare, the groundstaff began a hasty mopping-up operation but on the stroke of 9pm, the umpires decided no further play would be possible due to the wetness of the outfield.

Watch the second T20 international between England and Pakistan live on Sky Sports Cricket from 1.30pm on Sunday.