KASPER SCHMEICHEL reassured Christian Eriksen's wife her husband was alive as he supported her on the side of the pitch.

Sabrina Kvist Jensen ran down to the touchline when the midfielder collapsed during the Euro 2020 match between Denmark and Finland on Saturday. 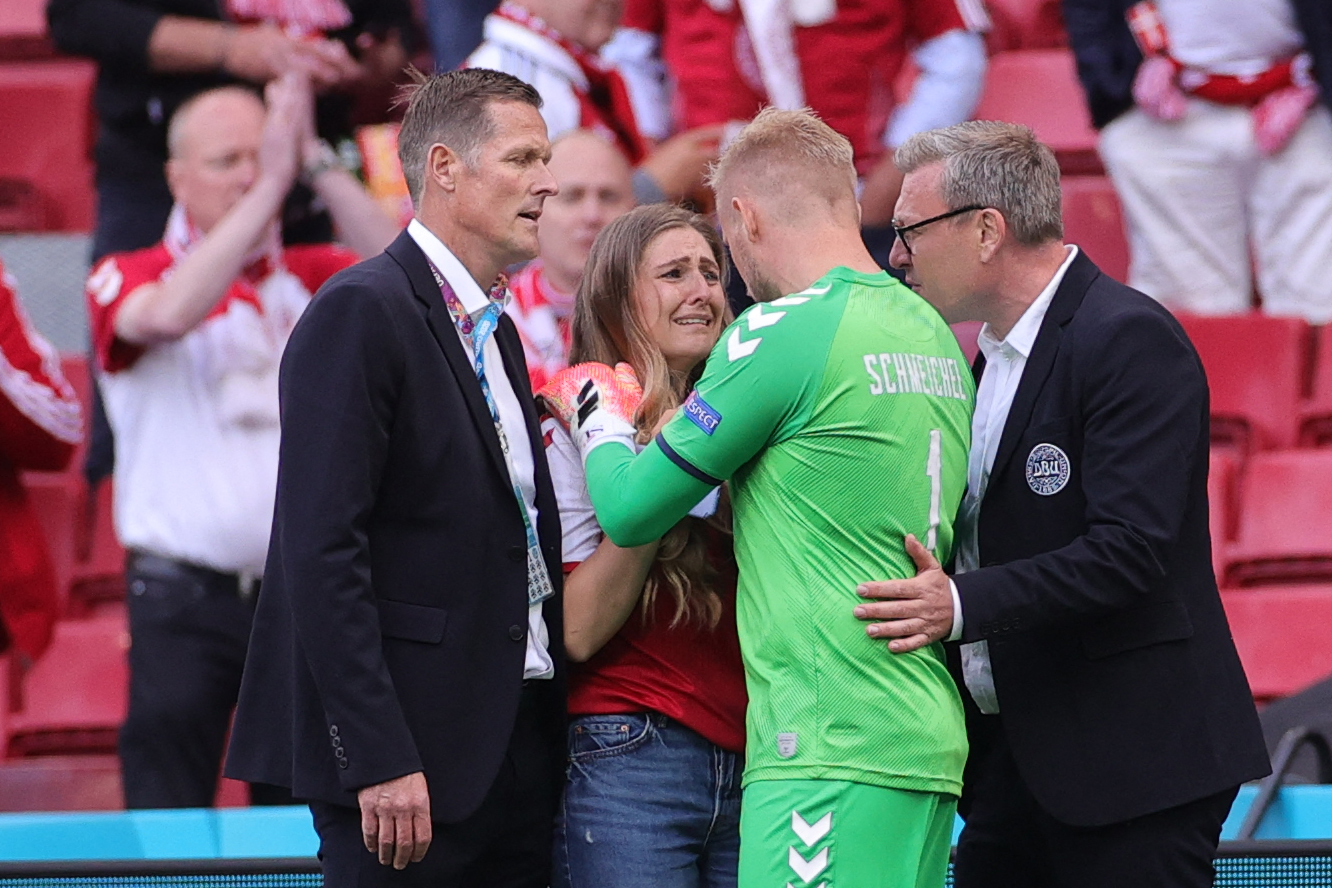 He had suffered a cardiac arrest and was being treated by medics who performed CPR and used a defibrillator to help resuscitate the Inter Milan star.

Eriksen is stable in hospital and has now spoken his first words, revealing he just wants to know why he collapsed.

But while her husband lay stricken on the floor at Parken Stadium, Sabrina was consoled by goalkeeper Schmeichel.

The Leicester City hero and captain Simon Kjaer made a beeline for the tearful partner and told her he was breathing.

Schmeichel's dad Peter told BBC Radio 5 Live: “That would be the worst two hours in my time in football.

"We had absolutely no information but we could see it was very, very serious.

"She came on to the pitch and you could see from the reaction of the players.

"I saw my son Kasper run over to her, and I spoke to him last night.

“He said that Christian is breathing. She actually thought that he’d passed away, and just to confirm that (he was breathing) he went back to be absolutely sure that he wasn’t saying anything that was out of order.

“By then Christian was talking to the doctor and we could see there was a little bit of calm there.

"But until it was confirmed it was really terrible to watch it all and to understand why a fit, 29-year-old player at this level and how it can happen like that.

“And having a son there, straight away you relate that to yourself.”

Schmeichel Jr – who was one of the first people on the scene when Leicester chairman Vichai Srivaddhanaprabha's helicopter crashed – spoke to the media on Monday.

He had special praise for his skipper Kjaer and revealed it was 'damn nice' to see Eriksen smiling in hospital yesterday.

The FA Cup winner said: "Personally, I tried to imagine if it was me who was lying there.

"I knew Christian's wife, children, and parents were there, so at one point I tried to look for them.

"It is an inhuman situation for them to go through.

"I am incredibly proud to have Simon as captain.

"It does not surprise me that he did as he did. He has an incredibly sensitive and human side of him.

"Simon and Christian spend a lot of time together in Milan as they live close to each other.

"It was damn nice to see him smile and laugh and be himself. Just notice that he is there.

"It was a wonderful experience and something that has helped me see that he was okay after lying there.

"We talked about nothing and everything. As long as he is well – that has been the most important thing. He has experienced something that we have not experienced."