No cheating! Give up? Cigar and a coconut if you said. . . NOBODY. 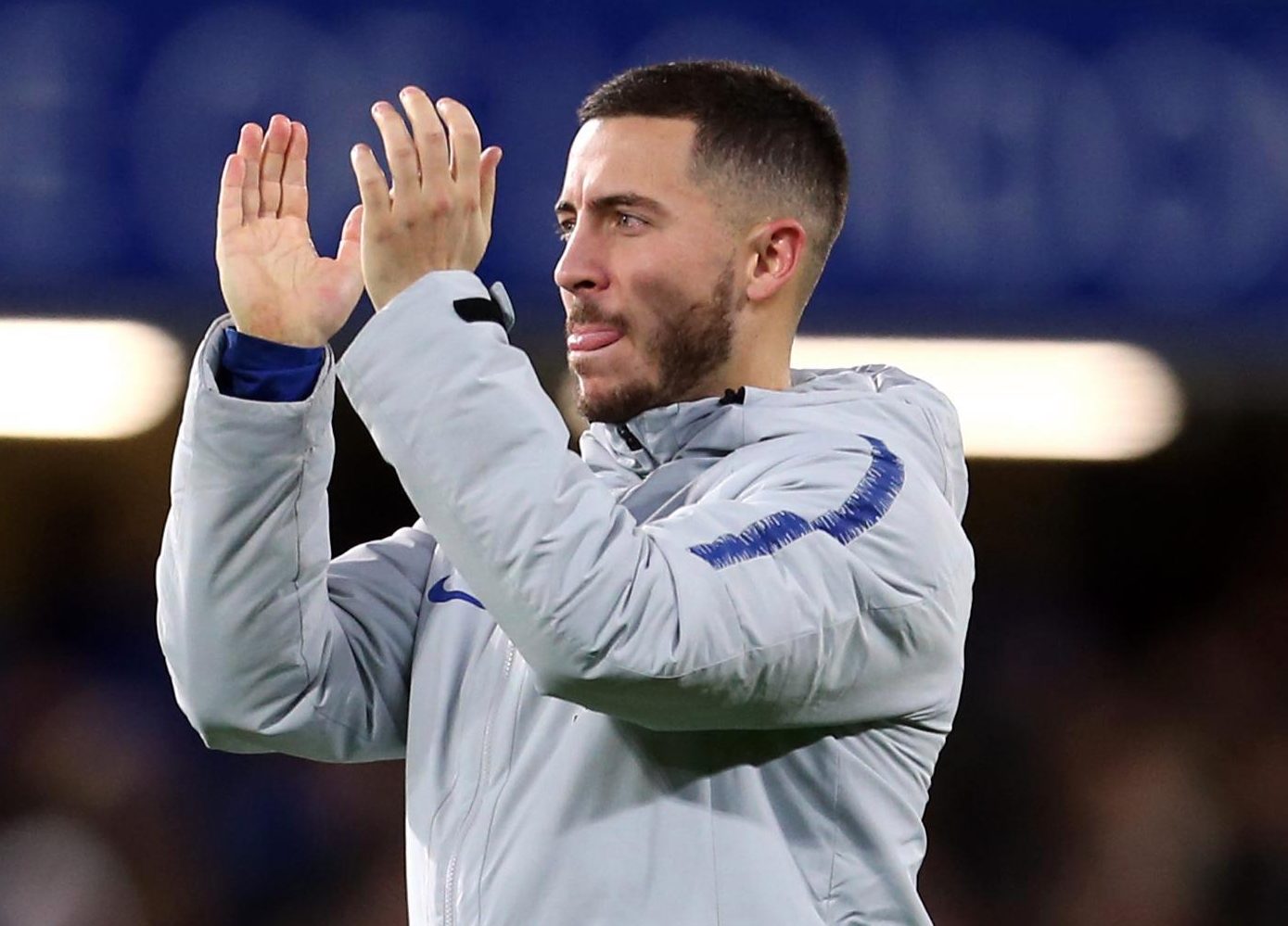 What used to be an iconic jersey at both clubs — think Peter Osgood and Kerry Dixon, Joe Royle and Niall Quinn — now belongs to no-one, just as the old-fashioned centre-forward sometimes seems like a thing of the past at the very highest levels of the game.

Alvaro Morata gave up Chelsea’s No 9 last summer, opting for the No 29 after his twin sons were born on July 29 — although some suggested it was because the shirt has been cursed since Jimmy Floyd Hasselbaink left West London in 2004.

City have not bothered allocating the No  9 since Nolito left in 2017 and he was a bit-part winger, anyway.

Sergio Aguero has the goals of an out-and-out frontman but at 5ft 8in he is not your old-school target man, especially under the Pep Guardiola masterplan. 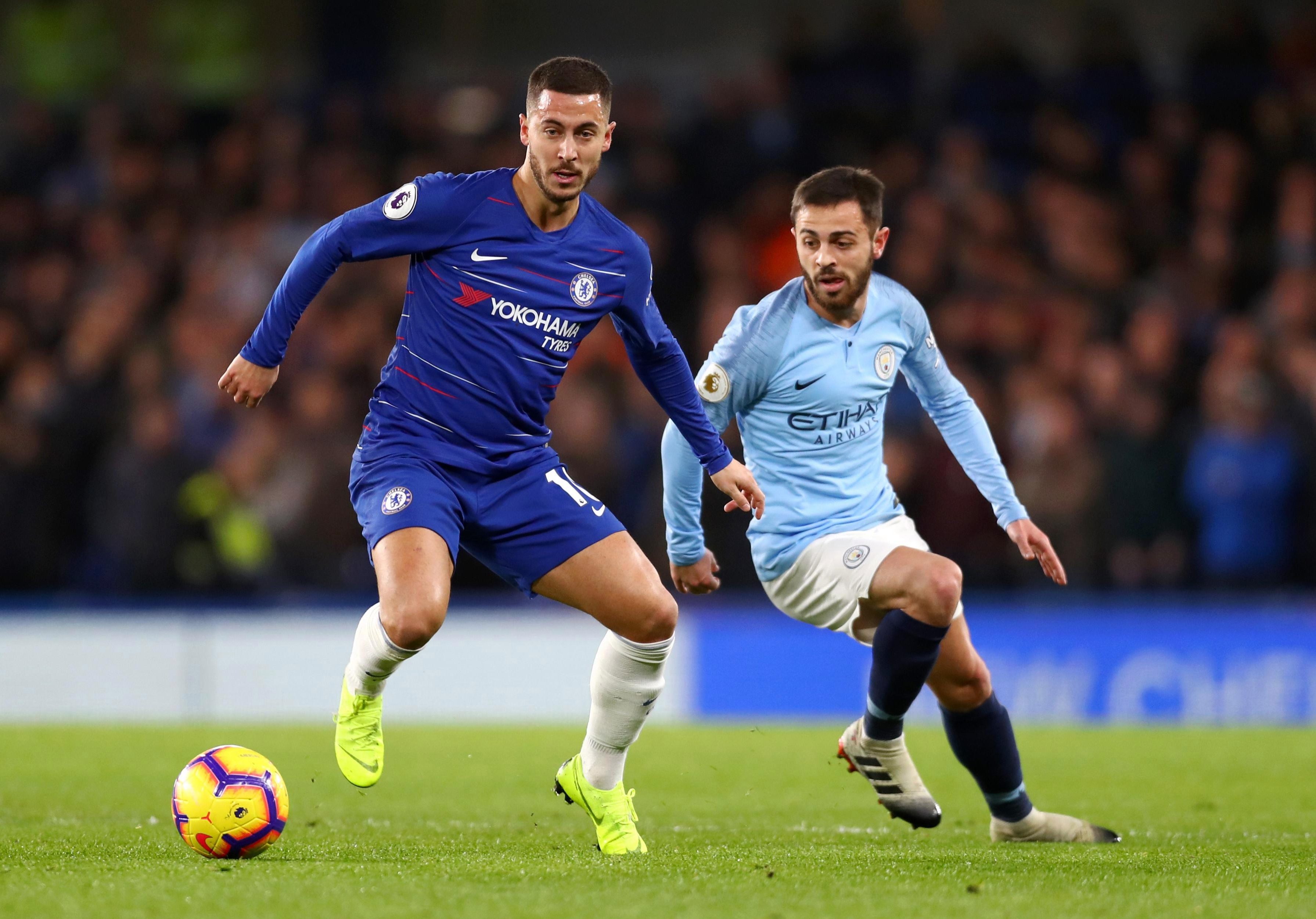 So last night was the battle of the false nines. Eden Hazard versus Raheem Sterling, then Riyad Mahrez, then Gabriel Jesus.

And until Hazard teed up N’Golo Kante for the opener, it was a battle City looked likely winners.

The main idea behind using a false nine is to draw out opposition centre-backs and create space for wingers or attacking midfielders.

Guardiola’s team enjoyed more success in that regard, particularly down their left, and had two good chances before Kante scored. 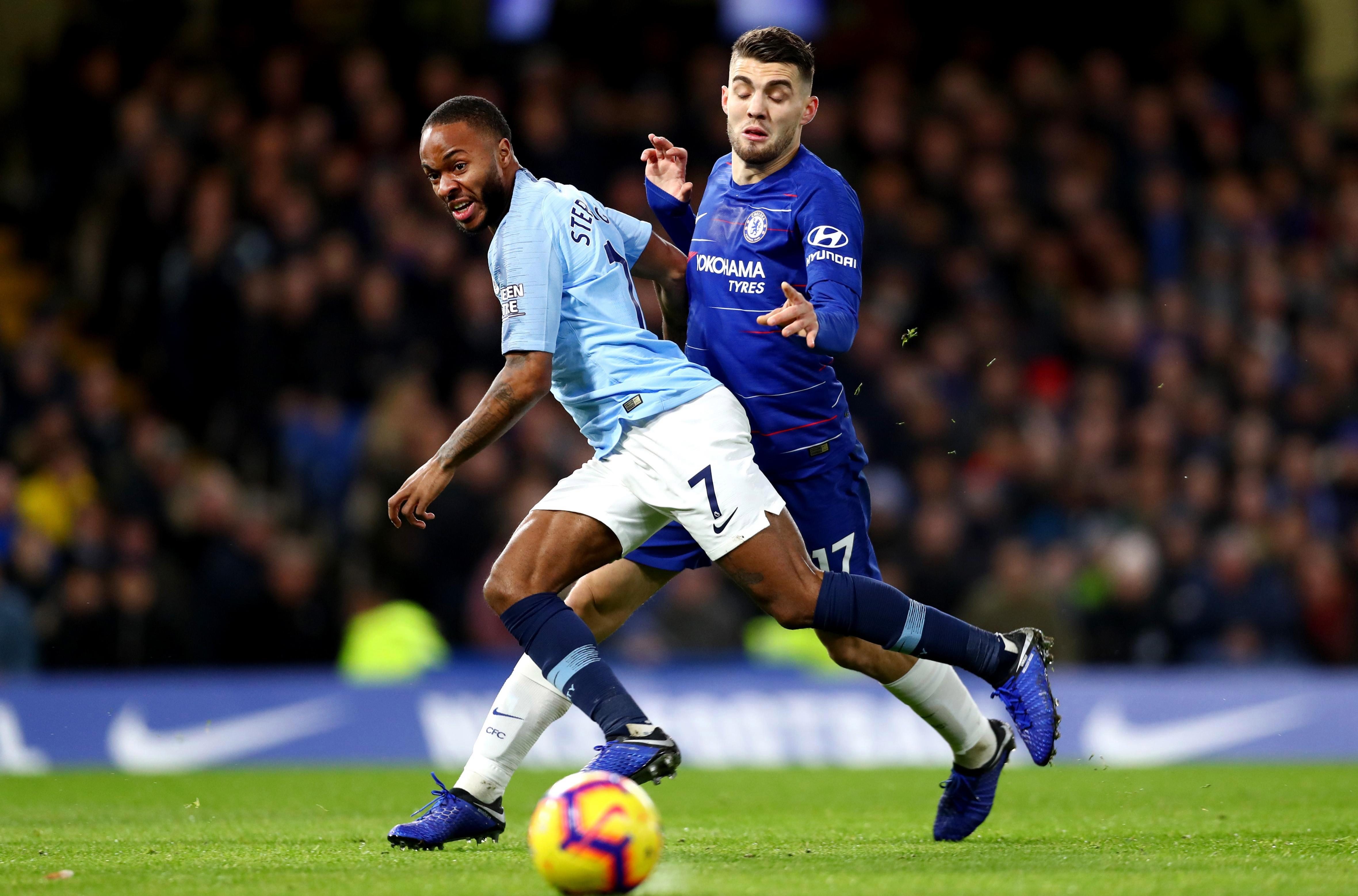 Bernardo Silva’s cross was deflected to Sterling and Sergio Aguero should have put the ball away rather than hit it tamely at Kepa Arrizabalaga.

Chelsea’s keeper had to do much better around the half-hour mark when Sterling turned provider, dropping deep and releasing Leroy Sane.

At the other end, things in the garden of Eden were not exactly blossoming. Chelsea struggled to gain a foothold and Hazard cut a frustrated figure, mainly thanks to the poor service from his team-mates.

With the game compressed into the middle of the pitch, City had the better of the 10-v-10 passing drills.

But they struggled to create chances, as the two Silvas were denied space and time to dictate the game. 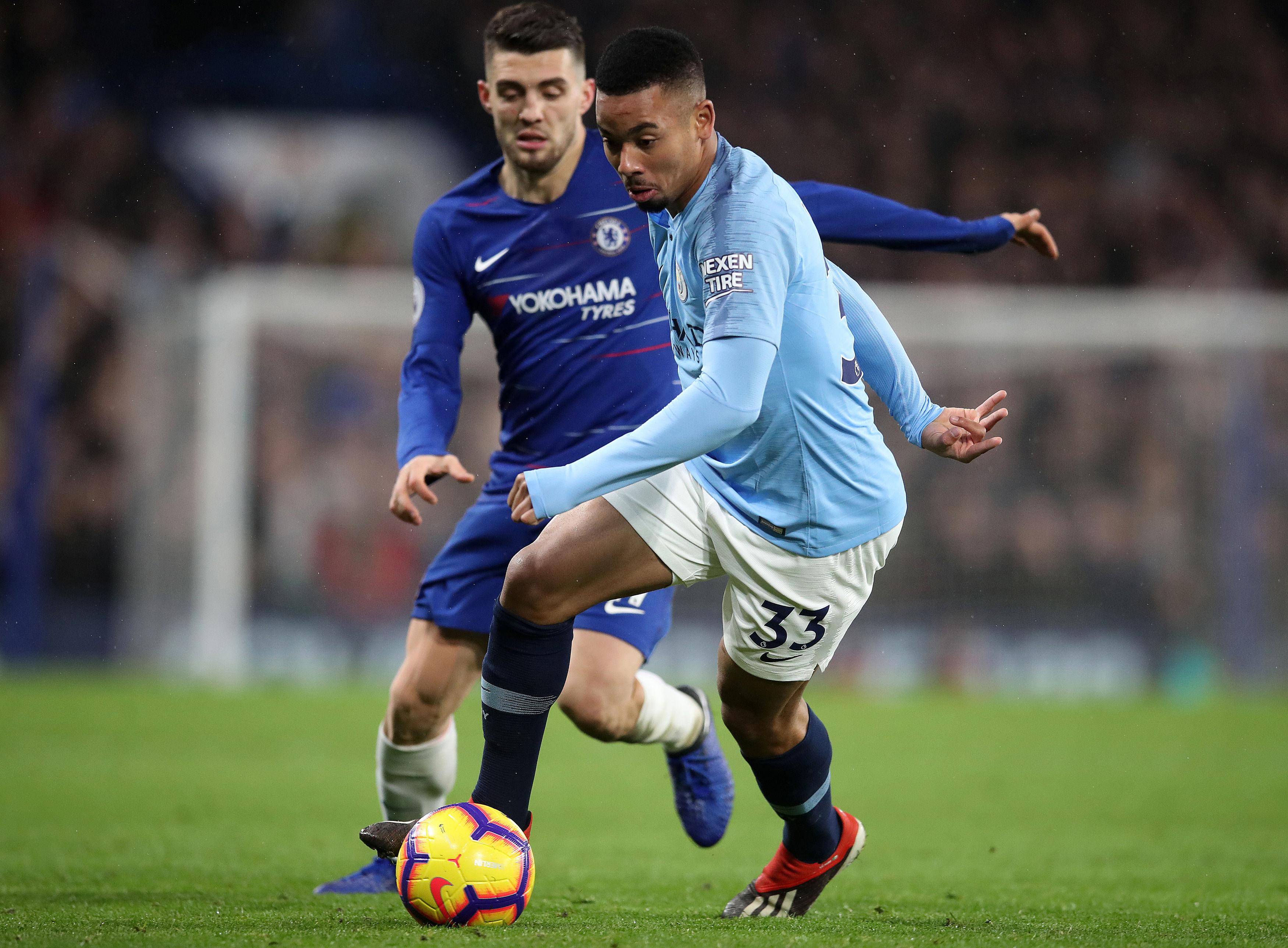 In that sense, Maurizio Sarri’s plan was working.

It was just hard to see where a Chelsea goal was coming from — a thought which might have occurred to Olivier Giroud as he sat, once more, on the bench.

It was nearly half time before Hazard found himself facing goal in a dangerous position. And then he failed to control Jorginho’s pass.

Yet Chelsea were quickly ahead as Marcos Alonso worked the ball to Hazard who rolled it back for Kante to smash into the net.

Ederson pushed away Willian’s free-kick early in the second half and, although Sane seemed to have a knock, it felt like time for Guardiola to try something else.

On came Jesus, a more conventional forward, to play in the central role which Mahrez had taken over from Sterling midway through the first half. 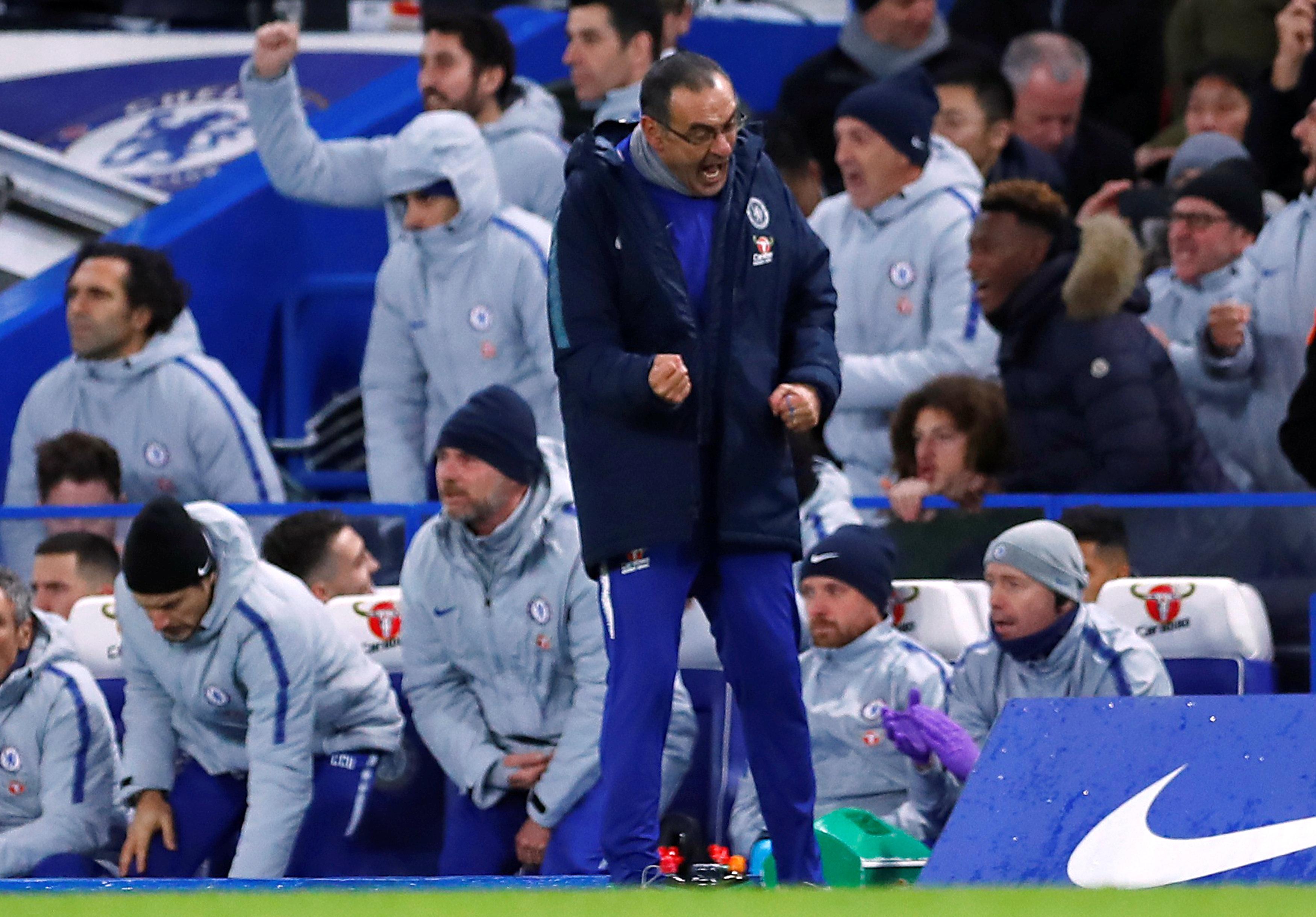 It was a minor triumph for Sarri to force the great Guardiola into a re-think but the Italian wanted three points, not plaudits.

Although he had little chance to show his class, he picked up another assist when David Luiz headed in his corner to seal the game.

There was a centre-forward on the pitch when Giroud replaced the Belgian in final minute. And only then did City have their second shot on target of the second half.

Sarri, by redeploying his most potent weapon, had spiked the guns of the champions.

Hazard has had many more spectacular days. But by going toe-to-toe with City, false nine to false nine, he and Chelsea pulled off their best result of the season.