Four of the top five teams in the NBA's eastern conference will go into the All-Star break off the back of wins with the Milwaukee Bucks, Toronto Raptors, Boston Celtics and Philadelphia 76ers all victorious.

A Giannis Antetokounmpo triple-double helped the Bucks rally for a 106-97 victory over the Indiana Pacers. 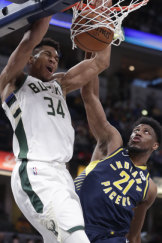 The All-Star captain had 33 points, 19 rebounds and 11 assists, to lead Milwaukee back from a 10-point fourth-quarter deficit and snap Indiana's six-game winning streak.

NBA-leading Milwaukee (43-14) have won seven straight on the road – their longest road winning streak since 1984-85.

Pascal Siakam scored a career-high 44 points and grabbed 10 rebounds as the Raptors won their sixth in a row by beating the Washington Wizards 129-120.

The Celtics (37-21) have won seven of their past nine, again without injured star guard Kyrie Irving, while the loss ended the Pistons' four-game winning streak.

Joel Embiid had 26 points and 14 rebounds while Philadelphia's starting five all scored in double figures in their 126-111 defeat of the New York Knicks.

James Harden had his 22nd 40-plus points game this season but his 42 points were not enough as the Houston Rockets lost 121-111 to the Minnesota Timberwolves.

The Brooklyn Nets beat the Cleveland Cavaliers 148-139 in triple overtime thanks to 36 points from D'Angelo Russell.

Jordan Clarkson had 42 points for the Cavs while Australian guard Matthew Dellavedova contributed a game-high 13 assists.

Dwyane Wade got the better of fellow veteran Dirk Nowitzki with 22 points to 12 as Wade's Miami Heat beat the Dallas Mavericks 112-101. 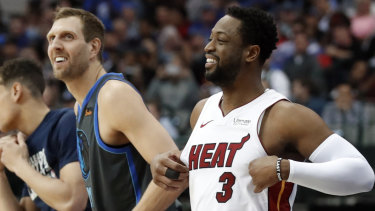 Otto Porter Jr scored a career-high 37 points in the Chicago Bulls' 122-110 defeat of the Memphis Grizzlies.

Nikola Jokic tipped in a basket with less than a second remaining as the Denver Nuggets held off the Sacramento Kings 120-118.

Jokic finished with 20 points, 18 rebounds and 11 assists for his 28th career triple-double.

And the Los Angeles Clippers routed Phoenix 134-107 to extend the Suns' losing streak to 15 games.