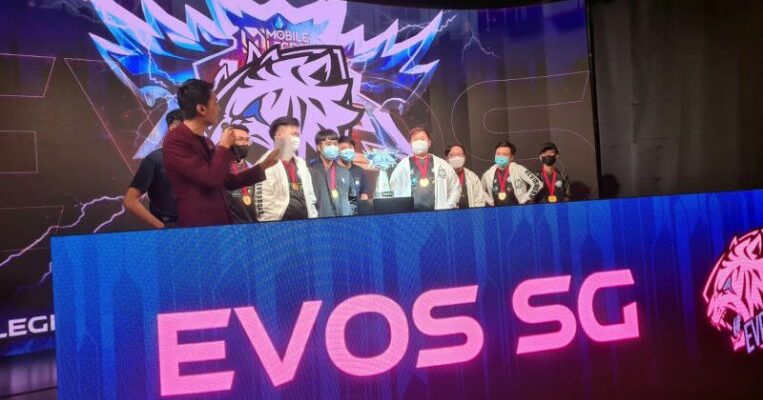 SINGAPORE – Despite going into the second season of the Mobile Legends Professional League Singapore (MPL SG) with a new-look roster and limited time to train, defending champions Evos SG emerged winners of the competition once again as they beat RSG SG 4-1 in the grand final on Sunday (Oct 17).

It was a rematch of the MPL SG Season 1 grand final that took place in May as Evos SG found themselves up against RSG SG again, but just two of the players – Andrew “Potato” Lim and Akihiro “JPL” Furusawa – from that team remained.

RSG SG got off to a winning start in the best-of-seven series at e-sports training facility The Gym, shortly after beating ALMGHTY 3-2 in the lower bracket final earlier on Sunday.

But Evos SG bounced back to claim the second game and dominated the grand final, winning the remaining games to bag the winners’ cheque of $30,000.

Lim said: “It was definitely going to be a tough game (against RSG SG). Overall, they are a sturdy and strong team, and a competitor we have to look out for.

“Based on regular season performance, they put up a strong fight, lost to just one team in the regular season. Facing them for grand final, we had to follow our plan and execute it perfectly.”

With less than six months between the two competitions, coach Daryl “Youngin” Ng said that sticking to their plan was key to making sure that the team was well prepared for the competition.

He said: “In general we paced out correctly because of the limited time we had to train and we made use of the time well. Coming into preparations every week, we made sure we had proper plans, how we achieve that, how it would snowball from the regular season to the play-offs.”

For making it to the grand final of MPL Singapore Season 2, Evos SG and RSG SG both earned a spot at the game title’s biggest tournament, the M3 World Championship which will take place in December.

At the M2 World Championship in Singapore in January, Evos SG made it out of the group stages but were knocked out in the first day of the play-offs.

Referring to Myanmar’s Burmese Ghouls – underdogs who finished second at M2 – Chong said: “I think we put up a good showing for a Singapore team. I hope we can replicate that, show up and shock everyone like Burmese Ghouls did.”