MELBOURNE, Australia — For the first point she played at a Grand Slam event in six years, Rebecca Marino hit an ace.

She celebrated with a subtle fist pump, determined to have the best next act she could after a lengthy intermission during which she became the face of depression among athletes.

“It’s easy to get caught up in the moment, just going from tournament to tournament now,” Marino said. “But if I stop and think about it, then that’s when I see that it’s pretty cool that I was able to do this, and to get this far, from no ranking to suddenly in the qualies of a Slam.”

Marino lost, 6-2, 6-2, to Caroline Dolehide on Tuesday in the first round of Australian Open qualifying, limited by a back injury, which curtailed her off-season training. Despite her stiffness, Marino, 28, showed flashes of the power and clean ball-striking that sent her into the upper echelons of tennis seven years ago.

With a percussive forehand and a booming serve that topped out at 120 miles per hour, Marino surged to a high of 38th in the rankings in the summer of 2011, when she was 20. Not a highly touted junior prospect, she had planned to enroll in college before her tennis successes mounted, catapulting her faster and further than she was prepared to handle.

“Not expecting it, I felt like I was thrown into this machine, and I didn’t understand how it worked,” she said.

Marino stepped back from the sport for the first time in 2012, taking seven months off. After returning for several months, she retired in February 2013 at age 22.

In a conference call announcing her decision, Marino revealed her struggles with depression; days earlier, she had discussed her social media abuse in an interview with The New York Times. Her leaving the sport was often attributed to one of those factors, or both of them, which Marino said was inaccurate in retrospect.

“When I look back, I wouldn’t necessarily say it was depression,” she said of her decision to stop playing. “It was burnout, and it was expectations put on my shoulders by myself and others, and I just wasn’t able to cope. It kind of all came to a head in a big, giant burnout, I guess.”

She said that after she stepped away from tennis she was “able to become superhappy and enjoy my life.”

Marino’s retirement at 22 generated considerable attention, particularly in her native Canada, where she was one of the brightest tennis prospects in generations. 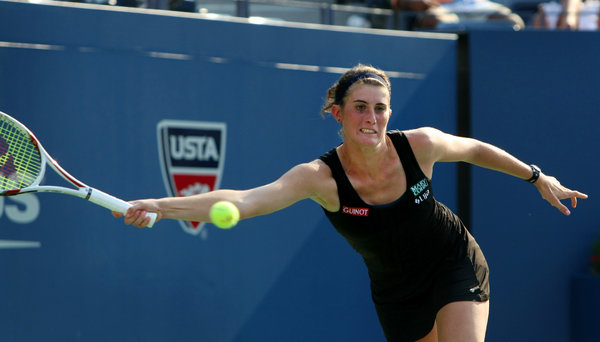 Her story resonated with others, but she felt uneasy being a touchstone for athletes struggling with depression.

“It wasn’t something I was prepared for, and it’s still something I’m kind of grappling with,” Marino said. “I’m still a really private person, and so for people to come up to me and tell me all of the things they’ve dealt with, or how I’ve affected them, it’s difficult sometimes, because I don’t really know what to say. Even though I’m happy that I’ve helped people, it can be overwhelming because I’m not professionally trained to help people.”

After retiring from tennis, Marino worked one summer for her family’s construction business, pouring cement and digging through clay. She later began teaching tennis lessons and enrolled at the University of British Columbia, where she studied English literature. The works she enjoyed most, she said, were ones from the Victorian era that grappled with the effects of industrialization on society.

In her second year, the university’s rowing coach recruited her to join the team, knowing her athletic background and her family’s extensive history in the sport. (Her uncle George Hungerford was an Olympic gold medalist in 1964.) Rowing improved Marino’s fitness and helped expand her sense of identity.

“To have a competitive outlet through a team like that was superfun,” she said. “It made me feel like I was a part of the university community. People didn’t look at me for my tennis anymore; they just looked at me as a student-athlete.”

Marino was shaken in February 2017 when her father, Joe, received a prostate cancer diagnosis.

“After he finished chemo, I kind of took a step back and wanted to look at what was important in my life,” she said. “I didn’t want to live with any regrets, and I thought that tennis was the one thing in my life that I kind of wish I had a do-over for.”

She also wanted her father to see her play again. Marino weighed the idea of a return for months and gained confidence after serving as a hitting partner at a tournament in Vancouver, her hometown, in August 2017.

A week before her next semester was to begin, Marino pulled out of her classes, quit her coaching job and moved to Montreal to begin working toward a full-fledged comeback at Tennis Canada’s training center.

After a false start because she did not re-enter tennis’s antidoping program in time, Marino returned to the sport at its lowest rung last January, at a series of small tournaments in Turkey. She won her first 19 matches, including her first 30 sets. She worked throughout the year to bring her ranking to its current spot of 216th, which was enough to reach her goal of entering the Australian Open qualifying draw.

Marino plans a long stay in the sport this time, and is working to ensure it is more pleasant and sustainable. She stays in better contact with friends, including more trips home to Vancouver, to help her keep one foot outside the sometimes suffocating tennis bubble.

“My friends don’t play tennis, so they don’t care if I win or lose,” she said. “They’re just concerned about how I’m doing as a person, if I’m enjoying myself, and when I’ll be back so we can hang out. My whole structure this time around is a little bit different, and I have a lot of things outside of tennis that keep me grounded.”

She added: “Previously, I felt like my identity was just ‘tennis player.’ But now I have many things that form my identity, and I feel like I’m very whole and very balanced.”

Marino hopes her triumphs off and on the court gain the same amount of attention as her rough times did. She wants people to see her as a real person instead of a headline.

“I have no doubts in my mind that I’m able to compete and be here,” Marino said. “I’m not going to ever go back to that place again because I know who I am now, and I know what I need to do.”