Snowboarding Germany president Michael Hoelz has expressed doubts about fair play at the Winter Olympics in Beijing, fearing that COVID-19 tests will be exploited to exclude strong athletes.

Hoelz’s comments came two weeks after the director of the alpine skiing division of Germany’s Ski Association, Wolfgang Maier, voiced concerns that COVID-19 tests in China were being run almost “arbitrarily” ahead of the Winter Olympics, which will start on February 4. 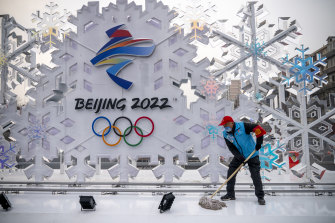 The Winter Olympics are due to begin in just over a week.Credit:Getty Images

“I doubt that we will see fair play in the competitions in China,” Hoelz said in a Snowboarding Germany podcast on Sunday.

“It is relatively easy with [COVID-19] testing, someone can later say: ‘we’re sorry, it was a false positive.’”

Hoelz, previously a leading official in Germany’s National Anti Doping Agency (NADA), said doping tests had been used in the past to ensure important athletes would not take part in the Games.

“We know how the topic of doping is dealt with in countries with such constitutions … A comparison between doping and COVID-19 tests is absolutely in order,” he said.

Hoelz said a German snowboarding coach had received inhumane treatment after testing positive during Olympic tests in China in November. He was later found to be a false positive.

“How [the snowboarding trainer] was treated for 24 hours, that’s really borderline when it comes to human dignity,” he said.

News, results and expert analysis from the weekend of sport sent every Monday. Sign up for our Sport newsletter.