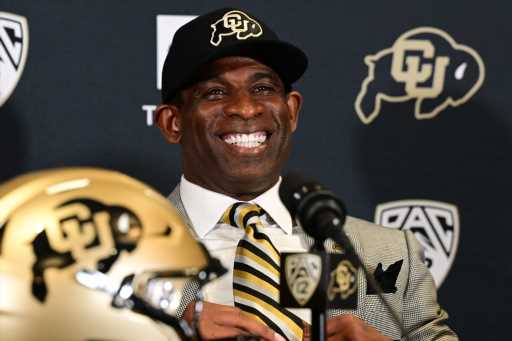 1. It’s Coach Prime’s world, baby. In four years, I’ve been to three different coach introductions at the Dal Ward Center. No shock, this was the most packed, best attended, you name it. At least 400 folks were on hand, by unofficial count, and Buffs boosters, alums and fans outnumbered media. By a lot. It wasn’t a press event so much as a celebration. And a celebration not just for Deion Sanders, but for …

2. Rick George’s victory lap. He politely dismissed the idea later, but CU’s veteran athletic director received the loudest ovation of the day from the fans in attendance, a thank-you for reeling in one of the biggest names — if not THE biggest — on the coaching free-agent market.

3. Nebraska, you’re on notice (And so are CU ticket-holders). With the biggest elephant in the room sitting to his left, George didn’t waste any time sticking a playful knife into that Big Red elephant that’s coming to Boulder on Sept. 9. “We need a Nebraska game to be all black and gold,” George pleaded. “Coach Prime’s first home game is against Nebraska, and we’re going to give him a Colorado Buffaloes welcome with black and gold (in the stands). Don’t sell your tickets, because we know who you are.” Historical note: Mel Tucker’s first game as CU coach in Boulder was also against Nebraska, back in Sept. 2019 — and Folsom Field was at least 50% full of Huskers red that day.

4. No wonder Owen McCown hit the portal. Sanders thanked CU officials and introduced his family. When he got to son Shedeur, his quarterback at Jackson State, he didn’t mince words: “And this is your (CU) quarterback,” he said as his son smiled. “He’s going to have to earn it.” The younger Sanders, a sophomore, has thrown for 36 touchdowns and 3,383 yards with the Tigers this fall. (Sanders also hinted that daughter Shelomi, who’d recently committed to the Jackson State women’s basketball program, may also be transferring to CU.)

5a. Still figuring each other out. On the whole, Sanders crushed the news conference. He said all the right things. But you could tell that certain Prime-isms went over the collective heads of the older Buffs fans and boosters in attendance. And there were some uncomfortable chuckles when Coach Prime — that’s what his name plate on the dais read — commented on one female reporter’s clothing as he kidded a few of the reporters who were called upon to ask questions during the very short news conference Sunday.

5b. So many killer one-liners from Sanders. Pick your favorite. Here’s mine: “Baby, I’m too blessed to be stressed.”