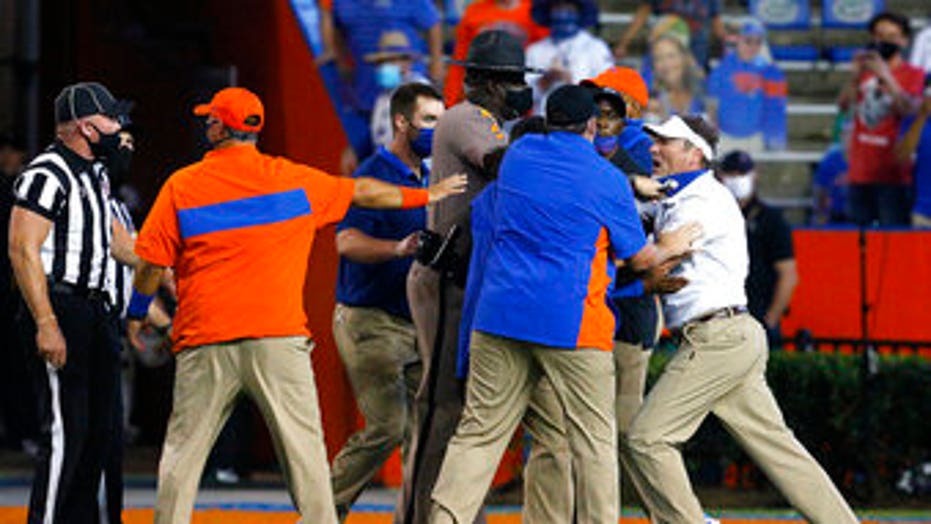 Gators coach Dan Mullen is being accused of instigating the bench-clearing brawl that erupted on Saturday when Missouri's Trajan Jeffcoat delivered a high and late hit on Florida quarterback Kyle Trask.

Mullen could be heavily fined or even face suspension for his role in Saturday’s fight after video from the game appeared to show the coach storming off the sideline as he began to shout at Missouri players on the field.

Immediately after, a huge fight broke out among players.

Mullen headed back to the tunnel with the team but came back out to fire the crowd up.

Reaction on social media was critical of the head coach — several people were calling for fines or even a suspension. Only three players were ejected from the game but the conference could dole out more punishment following its review.

After the game, Mullen defended himself, saying that he was “trying to get our guys off the field.”

“From my understanding, I think our guys thought they took a late hit at our quarterback,” Mullen said, SaturdayDownSouth.com. “They’re going to protect him. That’s their guy. I think they were going to protect him. I think both sides were trying to get people off the field, but everyone was a little edgy and probably went a little too far with it. We were trying to get our guys off the field in the middle of it all. … It is what it is — an emotional game sometimes.”

He continued: "I don’t condone it. I’m not real pleased about how it all played out, obviously.”

No. 10 Florida returned from a three-week layoff to rout Missouri 41-17.

Further punishment for the Gators could spell trouble when they take on rival and fifth-ranked Georgia next week. The game is likely to decide the winner of the SEC East.