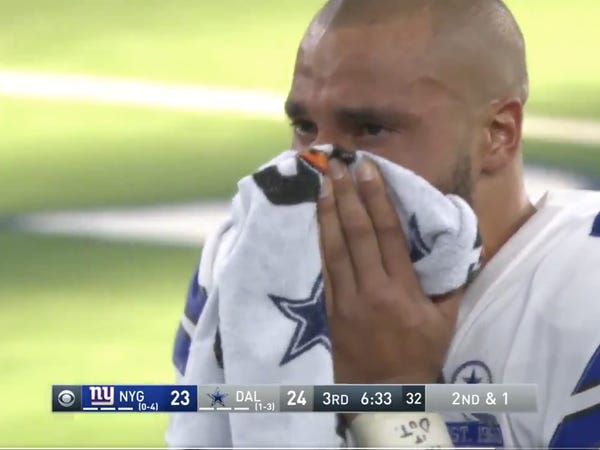 With the Cowboys in Giants territory and looking to add to a 24-23 lead in the third quarter, Prescott tucked the ball and ran, hoping for a first down. He was met by Giants defensive back Logan Ryan, who took down Prescott just shy of the first-down marker.

As Prescott went to the ground, his ankle took a bad turn, and he was left on the field in pain as the play ended.

WARNING: Some may find the following video disturbing.

Prescott was in tears as he was carted off of the field, but raised a fist to show the home fans that he was still with them. They cheered.

The Cowboys later announced that Prescott had suffered an ankle injury and was taken to a local hospital.

It's a heartbreaking turn of events for Prescott, who was in the midst of a career year statistically and playing for what was likely going to be one of the largest contract extensions in NFL history.

Now, Prescott's big payday is at risk of disappearing, depending on the severity of his injury.