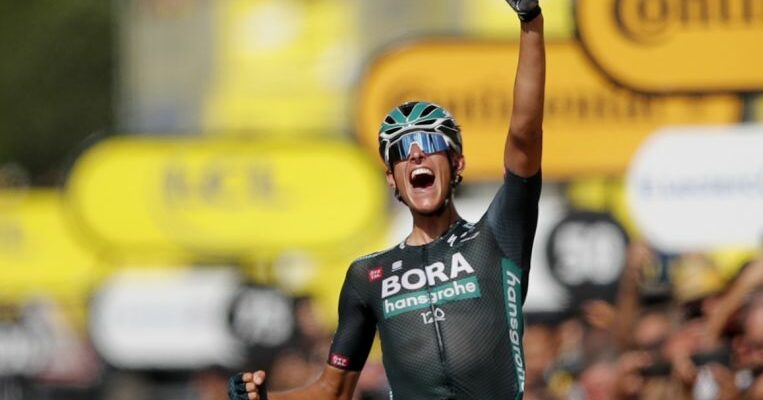 NIMES, FRANCE (REUTERS) – German Nils Politt won the 12th stage of the Tour de France, a 159.4-km ride from Saint-Paul-Trois-Chateaux, on Thursday (July 8) to claim the biggest win of his career.

The 27-year-old rider prevailed from the day’s breakaway, making his decisive attack 11.8km from the line.

Spain’s Imanol Erviti was second, with Australian Harry Sweeny third, both 31 seconds behind, according to provisional timings.

Overall leader Tadej Pogacar of Slovenia crossed the line safely in the bunch, almost 16 minutes behind but the top positions in the general classification remained unchanged.

Politt’s victory gives his Bora-Hansgrohe team something to cheer about after triple world champion Peter Sagan pulled out with a knee injury before the start of the day’s racing.

Slovakian Sagan said he would take some rest hoping to be ready for the Tokyo Olympics road race on July 24.

“It changed our tactics and directly after the start there were crosswinds and splits. I tried to give my best today. Winning a stage on the Tour de France is unbelievable,” said Politt.

“There were fast guys in our group and I knew I had to attack quite early.”

Crosswinds created splits in the peloton in a fast and furious start before a 13-man breakaway took shape while the pace was controlled by Pogacar’s UAE Team Emirates.

The presence of world champion Julian Alaphilippe in the breakaway led his Deceuninck-Quick Step team not to chase, meaning that Mark Cavendish would not contest the final sprint and missed out on an opportunity to equal Eddy Merckx’s all-time record of 34 Tour stage wins.

In the front group, Politt attacked first with 40 km remaining and there were four left to contest the stage win – Politt, Swiss Stefan Kung, Erviti and Sweeny.

Kung was dropped in a short climb before Politt went solo to take his second professional victory, two years after he had finished second in the Paris-Roubaix classic.

Friday’s 13th stage is a 219.9-km flat ride from Nimes to Carcassonne, where Cavendish will have another occasion to take his 34th win on the race.