Richie Mo'unga's form for the Canterbury Crusaders in their run to a 10th Super Rugby title could yet thrust All Blacks coach Steve Hansen back into a debate over his flyhalf options that he thought was long done and dusted.

The 25-year-old's poise under pressure in Saturday’s final against the Jaguares, when he slotted four penalties and a conversion, gave him the right to at least some consideration as a pretender to Beauden Barrett's No.10 jersey. 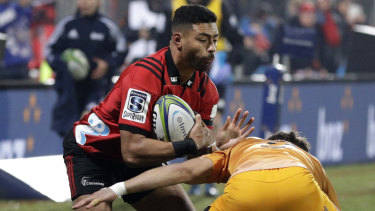 The drum beats for Mo'unga to usurp the two-time World Rugby Player of the Year are not as loud as last year, however, perhaps because of the proximity of the Rugby World Cup.

Mo'unga has played just nine Tests since he made his debut against France last year, seven from the bench. Barrett has played 73 tests since 2012, more than half of which have been in the No.10 jersey.

The 28-year-old Barrett has also already been through one World Cup campaign in 2015 and his experience in the high pressure of test matches weighs heavily in his favour.

The absence of the injured Damian McKenzie, an option at fullback and flyhalf, is also likely to play a part in Hansen's thinking after a lack of depth in the position was exposed in this year's Super Rugby.

Hansen, therefore, named the uncapped Josh Ioane with Barrett and Mo'unga in his Rugby Championship squad to see how the 23-year-old fits into the environment and whether he can step up.

New Zealand knows only too well what a flyhalf crisis at a World Cup looks like, having needed fourth choice Stephen Donald to kick the winning points in the 2011 final.

Mo'unga's performances this year, however, have ensured that few in rugby-mad New Zealand would have too many qualms about him starting knockout games during the global showpiece.

His ability to unlock defences and see space behind the line kept the Crusaders on the front foot this season and in the first half of the semi-final against the Hurricanes he outplayed Barrett.

In the second half, however, the Hurricanes abandoned their kicking game and let Barrett take on the defensive line, where he was able to create space for players outside him and showed the type of play he will need to flourish in Japan.

With Hansen looking to rest a large number of Crusaders for the opening Rugby Championship clash against Argentina in Buenos Aires on July 20, Barrett is likely to start with Ioane on the bench.

It would be little surprise to see Mo'unga start the next game, against South Africa a week later in Wellington, with Ioane again on the bench to test the duo against their Pool B rivals at the Rugby World Cup.

The double defending champions play the Springboks in their opening match in Japan on Sept. 21, with Hansen likely to revert to his first-choice number 10, injury permitting.