Cricket Australia's most powerful figures have started discussions regarding Steve Smith and David Warner's reintegration, with a pair of ODIs against Pakistan looming large.

Smith and Warner's year-long bans are set to expire in the middle of a five-match ODI series that will run from March until early April. 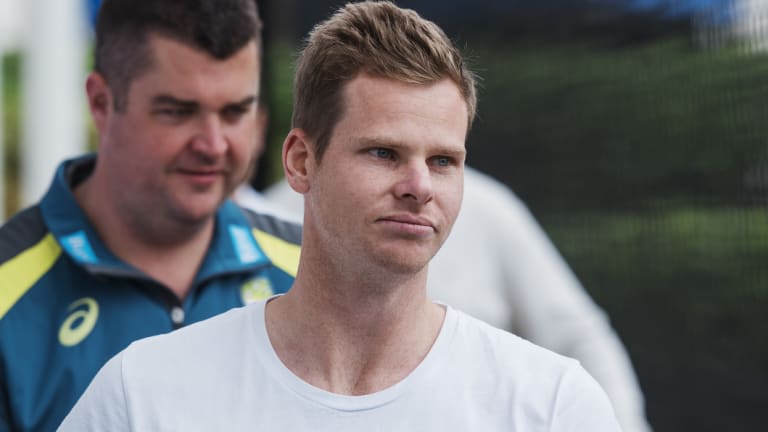 Steve Smith (pictured) and David Warner could return to international cricket via the one-day series against Pakistan.Credit:James Brickwood

Cricket Australia chief executive Kevin Roberts and national coach Justin Langer are both keen to focus on the task at hand, a four-Test series against India that continues on Boxing Day.

But Roberts and Langer, along with on-field leaders, will soon settle on the path that Smith and Warner must follow as they bid to take part in Australia's World Cup and Ashes defence in England next year.

Smith and Warner were both preparing to celebrate the end of their suspensions in the Indian Premier League, which starts on March 29, but that plan could change.

"We've had some good early discussions. We're also conscious that we've got a bit over three months to prepare," Roberts said.

"We're in the planning phase.

"If the draft dates of the Pakistan series remain as they are then it's possible the players will be eligible for selection for the final two matches.

"That [whether Smith and Warner return mid-series] is something we need to consider over these coming weeks."

There were murmurs that Pakistan would shift dates of games, allowing Smith and Warner to take part in the entire series, but Roberts confirmed CA's "working assumption is the dates will remain as they are".

The five-match series is likely to be held in the United Arab Emirates but Pakistan haven't given up hope of staging at least some matches in their homeland, which Australia haven't toured since 1998 because of safety concerns.

"We share Pakistan's desire to see more international cricket returning to Pakistan but we've made it really clear that our first priority in that regard is the safety of our players," Roberts said.

"We'll never compromise the safety of our players. We've also made it clear that we'll be taking advice from the experts.

"At this stage the advice hasn't changed but we'll continue working through that over the next couple of months."

Langer said on Christmas Eve there was "definitely potential" that Smith and Warner could return against Pakistan.

"They're very determined to get back into the Australian cricket team," Langer said.

Smith suggested last week his stints in Twenty20 competitions would be suitable preparation for the 50-over World Cup.