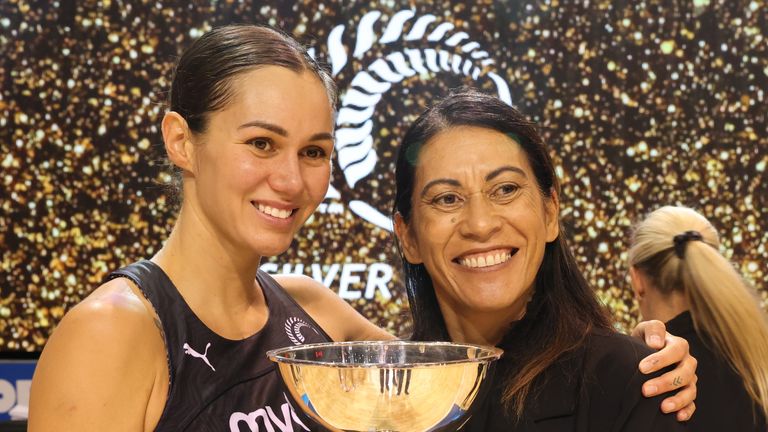 The Silver Ferns came from behind to deliver a dramatic final-Test win over Australia, which secured the Constellation Cup on Sunday. The result ended a nine-year wait to lift the trophy once again and adds yet another piece of silverware to their ever-growing trophy cabinet.

Dame Noeline Taurua’s outfit secured the series 3-1, after turning around a first-half deficit during the fourth and final match against their great rivals Australia.

At full-time, the jubilant home crowd, who were allowed into Christchurch Arena for the final game after New Zealand’s change in COVID-19 alert level, roared as their team forced the Australian Diamonds to relinquish their hold on the Constellation Cup.

It was a Test series that delivered in more ways than one. It defied a global pandemic, it survived three earthquakes and, perhaps most importantly, it set the international netball wheel in motion again.

With the Commonwealth Games happening next year and the Netball World Cup on the horizon after that, fans and neutrals approached the series with a curious eye.

The question was, how would the top two netball nations perform? Here we take a look at some of the key talking points…

New Zealand know how to win

While the Constellation Cup is now safe on New Zealand’s shores, the journey to securing it wasn’t always plain sailing for the Silver Ferns.

In three of the four Test matches, New Zealand were significantly down at half-time, meaning that a super-charged second half was the only way to secure victory.

Remarkably, against the world’s toughest opposition, Taurua’s side were able to produce the performance that they needed on two of the three occasions.

With each final quarter that came, Stacey Marinkovich’s new-look Australian side looked weary next to the fighting Ferns, who duly wrestled victory from their grasp.

Although, it’s not likely to be a pattern that Taurua will be entirely delighted with, given that her players might have avoided putting themselves in such positions had they started stronger, the head coach will no doubt still be pleased.

The Silver Ferns, unlike Australia, seemed always to trust their game plan, and at no point did they bow to pressure when the heat was applied.

For the rest of the world watching, the dawning of New Zealand’s new era of self-belief might well be the most troubling aspect of their game to date.

Is this the end of Australia’s dominance?

Silver at the Commonwealth Games in 2018, silver again at the Netball World Cup in 2019 and now no Constellation Cup. For the first time in Australia’s netball history, the world No 1s are without any silverware.

It is a harsh reality for the Diamonds’ new head coach, Marinkovich, whose side faced less than ideal circumstances in the lead up to the series, but it is a reality all the same.

Of course, Australia are a team very much under construction and two absent attackers, in the form of Gretel Bueta and Steph Wood, were both missed. Perhaps now, without anything left to defend, could this be a moment in time for the world No 1s to regather and recuperate?

Frighteningly, even with over 490 days away from international netball, the Diamonds were impressively competitive and were by no means far off the mark.

In an arena where experience is valued above all else, it was the young, up-and-coming players for both Australia and New Zealand who captured the imagination.

For much of the series, the shooting circles of both sides were propped up by players all under the age of 26.

At 23-years-old, Maia Wilson played all four games and took the bulk of New Zealand’s shooting load on her shoulders. Across the tour, she put up an immense 140 goals for the Silver Ferns.

Down in the Diamonds’ end, it was debutantes Kiera Austin and Cara Koenen who stepped up to the plate and in doing so, controversially, sent Australia’s former captain and cap centurion Caitlin Bassett to the bench.

Koenen in particular asked several questions of the New Zealand defence, seemingly having free reign of the baseline.

The 25-year-old Sunshine Coast Lightning player (and former student of Taurua), partnered well with Austin to create a moving shooting circle, something of a new experiment for Australia who typically relied on Bassett as a target shooter.

For those dissecting Australia’s loss, the focus may well turn to include the impact of Suncorp Super Netball rule changes of recent years.

With two timeouts per half at any point in time while play is in progress, rolling substitutions and a two-point Super Shot, the netball played by those in Australia’s national side week-in week-out, has come to look very different to that played under international rules.

For some, the consequences of the rule differences bore fruit throughout the series.

The remarkable nature of New Zealand’s comebacks was that the players seemed to come together on court during a quarter to deliver; it was rarely after a break of play or a substitution when they were able to shift the tide.

Australia, in contrast, never looked able to bring about their own counterplay once New Zealand began to surge. Even with eventual substitutions, players still appeared tired and exposed come the end of the match.

Could this be in part down to a reliance on the time-outs of Super Netball often used to halt opposing momentum? It will likely be a talking point that plagues the Australian national side for years to come.

Of course, it is not just the Diamonds that are affected by these rules. International sides including England, South Africa and Jamaica all have players plying their trade in Suncorp Super Netball.

For New Zealand, winning the Constellation Cup is another step towards world netball domination. For Australia, it was a steep learning curve; a reminder of what they have, and what else needs to be done.

For the rest of the world, it was an inspiring series and a chance to analyse two of the world leaders and see how they are progressing, a little over 12 months out from the next Commonwealth Games competition in Birmingham.