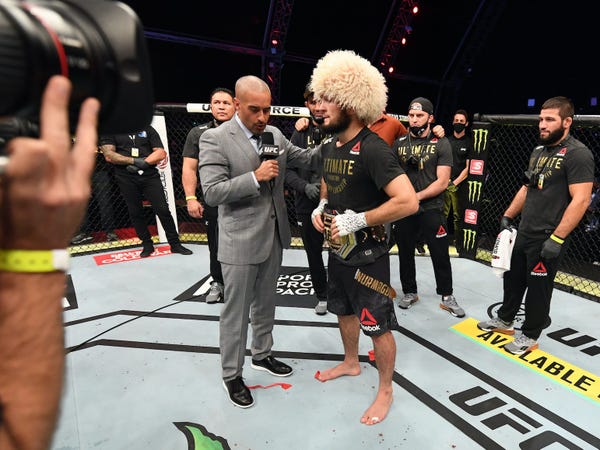 Nurmagomedov, the UFC lightweight champion, retained his title with a second-round triangle choke submission win at UFC 254, the Fight Island finale, inside the behind-closed-doors Flash Forum on Yas Island in Abu Dhabi.

Though Gaethje tapped to the choke the referee Jason Herzog did not see and the American striking maestro lost consciousness to Nurmagomedov's hold.

The Dagestan sambo specialist dropped to his knees in the middle of the Octagon, cried, and then announced a shock retirement as he said he promised his mother he would only fight that one time after his father died from coronavirus complications earlier in the year.

McGregor lost to Nurmagomedov in the fourth round of a wild 2018 bout, and the pair share one of the fiercest rivals in all mixed martial arts.

But shortly after Nurmagomedov's win and retirement statement, the Irish former two-weight UFC champion sent his congratulations on Twitter.

"Good performance [Khabib Nurmagomedov]," said McGregor before adding that he will still be competing.

"I will carry on. Respect and condolences on your father again also. To you and family. Yours sincerely, The McGregors."

Nurmagomedov's victory brought to an end a five-week combat sports festival on Fight Island, the second time the UFC had hosted an ambitious project in which it could host international events amid the pandemic in the United Arab Emirates.

It will be returning to Fight Island "in late January, early February," according to the UFC President Dana White, who addressed the press at a media event Insider attended at the Flash Forum after UFC 254.

It is unclear whether McGregor will feature, but the Irishman did recently agree a January 23 return to the Octagon against Dustin Poirier.