Aroldis Chapman was nicknamed the Cuban Missile for a reason. The Yankees’ lanky left-handed closer from the Caribbean island has long been the most prominent face of the velocity explosion in modern baseball. Ever since he broke into the major leagues in 2010, few pitchers could match his 100-miles-per-hour fastball.

Until last season. A month on the injured list with left knee tendinitis sapped some power, and his average fastball speed dipped slightly from the previous season, to 98.9 m.p.h. He was still among the hardest throwers in baseball, but for the first time since 2013, Chapman was not tops: St. Louis Cardinals relief pitcher Jordan Hicks, nine years younger, claimed the title with a 100.5-m.p.h. average, according to Fangraphs.

So some eyebrows, including those of the injured and inconsistent Yankees (8-10), were understandably raised when Chapman began this season — albeit in the early April chill of the Northeast — throwing fastballs as slow as 92 m.p.h. It was yet another potentially worrying issue for a Yankees bullpen that has not lived up to lofty expectations, and for the depleted roster in general.

But Chapman himself was not concerned — and with reason. In keeping with past early-season buildups, his speed has ticked up each outing, reaching 98 to 100 m.p.h. with ease in his two most recent appearances. In the admittedly small sample size of seven games, his average was back up to 97.1 m.p.h. entering Friday night’s game against the Kansas City Royals.

“As I get more work, I feel much better and my arm’s better, too, as well as my velocity and my pitches,” said Chapman. “Little by little. A lot of people worry about velocity, but I’m not worried about it.”

But as his average picks up with the temperature and innings, where will it ultimately settle?

Chapman, a five-time All-Star, is still an outlier given how long he has held his velocity. Yet as he continues aging, not even Chapman thinks he will average 100 m.p.h. for an entire season anymore. Nor does he want to, especially with the resurgence of his wipeout slider.

“My first few years, yes, I was trying to throw hard; it’s what I had,” he said. “But through the years, your mentality starts changing. My objective now isn’t to throw as hard but to pitch. For example: tossing innings with as few pitches as possible or throwing first-pitch strikes to every batter.”

There were times last season, as Chapman’s velocity hovered around 97 m.p.h., that Larry Rothschild, the Yankees’ longtime pitching coach, thought it might the new norm.

“But then you’d see the big numbers,” Rothschild said. “As it warms up and he gets out there, you’ll still see them. But he’s thrown a lot of fastballs at a very high velocity, so at some point, you’re going to see a little bit of a dip.” 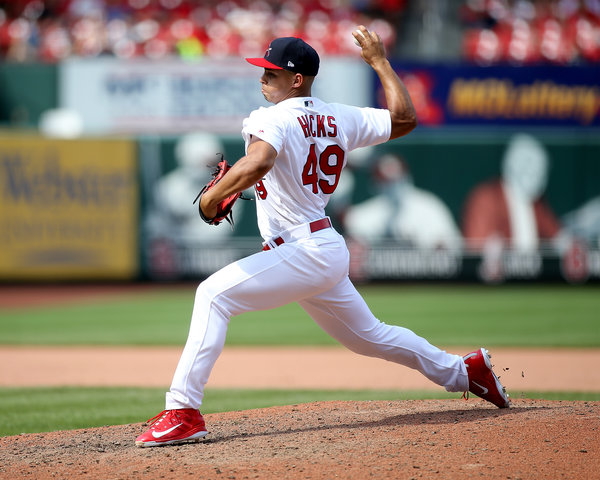 It feels preposterous to doubt whether 97 m.p.h. is enough: Many professional pitchers are unable to throw that hard, let alone average it for an entire six-month season — and for many years. The average fastball in baseball last season was 92.8 m.p.h., according to Fangraphs. But Chapman is so freakishly athletic that he set a new norm.

“The years have gone by, and back then, ‘the Cuban Missile’ was good,” he said. “But before, how many pitchers were throwing that hard? Maybe two or three pitchers throwing over 100.”

There are more now who can reach it, even starting pitchers. Chapman marveled at Hicks’s arm, which uncorked a 105 m.p.h. fastball in a game last May, matching Chapman for the fastest pitch in recorded baseball history. “And there are some hard throwers who haven’t reached the big leagues yet,” Chapman said.

Even though Chapman has mitigated his aging process by bulking up his once-gangly 6-foot-4 frame, his arm will continue to lose power over time. His fastball has already induced fewer swings and misses each year (2017 and 2018 were his lowest rates since the start of his career).

Still, as Chapman pointed out, even 96-m.p.h. fastballs would be more than enough to succeed in the majors — as long as he still gets outs. And in his six outings this season entering Friday, he mostly has, allowing two runs, taking one loss, striking out nine and walking one.

What has helped Chapman already is his slider. Before departing via free agency after last season, reliever David Robertson helped Chapman tweak the grip on his slider, which led to sharper movement, and it proved successful in the second half.

And so far this season, the third of Chapman’s five-year, $86 million deal with the Yankees, he is using the slider even more: about 31 percent of the time entering Friday. He said he had never felt better with it.

“That’s why the slider is not only a pitch here and now while he still has electric stuff, but I think, as long as he wants to do this and he’s healthy, that gives him a pitch that’s going to give him longevity,” Yankees Manager Aaron Boone said last month, adding later: “It really impressed me last year when he started to use it more. There were times he was able to strike that pitch better than his fastball.”

That is not to say that Chapman’s trademark pitch is feeble just yet. After seeing fastballs of 95 and 96 m.p.h. from Chapman in the ninth inning of an April 6 game, Baltimore Orioles outfielder Trey Mancini struck out on a 98 m.p.h. offering down the middle of the plate.

“It seemed even harder,” Mancini said. “I thought that it was probably 100, just from the eye test. It’s still an electric pitch. He’s a really tall guy and when he releases it, the ball seems like it’s right on top of you.”

Two days before that, Mancini saw three sliders from Chapman, lining out on the final one.

“A lot of people don’t know: His slider is a pretty darn good pitch,” Mancini said. “And with age or anything like that, that slider is still going to make that fastball look really hard, even if it’s slightly less hard than it used to be.”