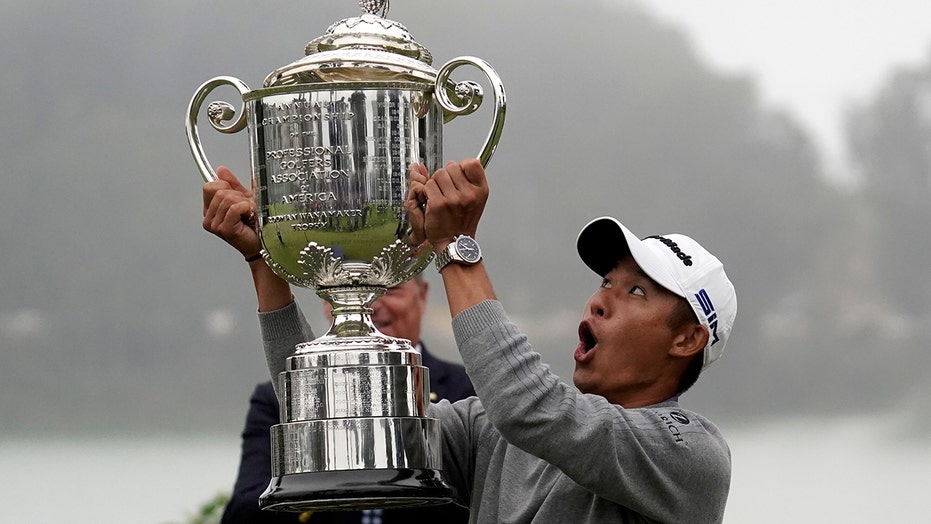 Collin Morikawa handled nearly everything well Sunday – from the front and back nines to some of the veterans on the PGA Tour as he shot up the PGA Championship leaderboard for the win.

Morikawa shot a final round 64 to propel him to victory over the likes of Paul Casey, Dustin Johnson, Bryson DeChambeau and a handful of others to pick up his first major victory.

It wasn’t until he was done playing where he found his biggest challenge – the top of the PGA Championship trophy.

After he was finished with his post-round interview, Morikawa held up the trophy only to lose the top half of it. It was the only moment from Sunday in which the 23-year-old appeared to lose his cool.

When asked whether he thought he would win his first major so soon, he replied: “Of course.”

“Why not? If you believe in yourself — and I believe I can do it —why not have it as one of my goals?” he said. “It’s crazy because it feels like this is where I’m supposed to be.”

Morikawa’s most memorable shot came on the 16th hole. On a par 4, he drove the ball 7 feet from the pin and nailed the eagle shot. It ultimately proved to be the difference-maker and what set him apart from Casey down the stretch.

“This is one time I really wish there were crowds,” he said. “I was just praying for a straight bounce … and then after it bounced, it kind of got behind a tree that we couldn’t see around the corner. So once it bounced, I was like ‘OK, I will take it anywhere.’

“I peeked around right and looked around the tree, and it looked really, really good.”