The final miles of a nearly two-month race across Antarctica — a lonely effort marked by long days, short nights and stunning endurance — ended Wednesday with a sprint to the finish.

In an effort that could go down as one of the great feats in polar history, the American Colin O’Brady, 33, covered the final 77.54 miles of his 921-mile journey across Antarctica in one last 32-hour burst during which, without sleeping a wink, he became the first person ever to traverse Antarctica from coast to coast solo, unsupported and unaided by wind.

O’Brady’s transcontinental feat was remarkable enough, but to complete the final 77.54 miles in one shot — essentially tacking an ultra marathon onto the 53rd day of an already unprecedented journey — set an even higher bar for anyone who tries to surpass it. In nearly two months racing on his own, O’Brady took only one half-day off when, on Nov. 29, the 27th day of his journey, he lost a skin from his ski and was forced to set up camp early, reglue his skin and lick his wounds.

O’Brady’s culminating effort joined some the most remarkable feats in polar history, alongside expeditions led by Norway’s Roald Amundsen and Robert Falcon Scott of England, who battled Amundsen to become the first to reach the magnetic South Pole, and Borge Ousland’s magnificent traverse in 1996-97, when he became the first to cross the continent alone and unsupported. Since Ousland’s traverse, at least three others have tried to duplicate Ousland feat without kites, raising the stakes and trimming the margin for error several degrees. O’Brady is the first to succeed, crossing the finish early Wednesday afternoon. 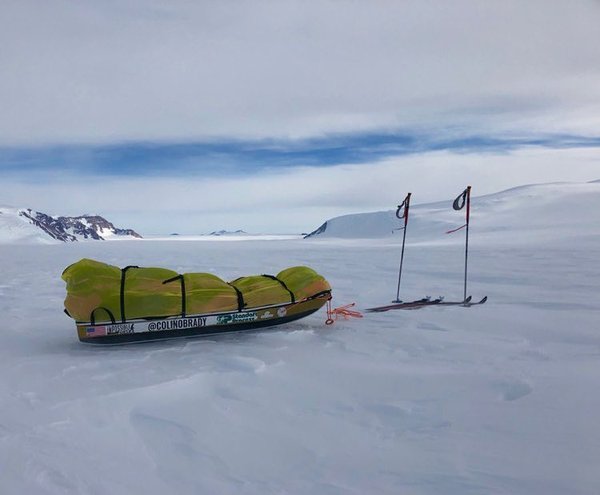 In 2016, Henry Worsley, an Englishmen and special forces veteran, died days after being airlifted from the ice. He had covered over 900 miles and come within 126 miles of the finish. In 2017, another Englishman, Ben Saunders, gave up the same quest at the South Pole, and this year still another Englishman, Worsley’s close friend Louis Rudd, 49, is also on the ice.

Rudd has been racing O’Brady, from the so-called Messner Start on the Ronne Ice Shelf to the Ross Ice Shelf at the foot of Leverett Glacier, since the pair departed Punta Arenas, Chile, on Halloween and then the Antarctic Logistics & Expeditions (ALE) base camp at Union Glacier on Nov. 3.

Rudd was in the lead for the first week, but O’Brady caught him on Nov. 9 and soon took a lead. His advantage had remained between one and two days for several weeks. Then O’Brady’s Christmas Day march finished him off.

It all started with a feeling.

O’Brady said he woke on Christmas morning at an elevation of over 8,000 feet above sea level but sensing that his moment had arrived. He knew he had a safe lead on Rudd, and had been making solid progress since reaching the South Pole on Dec. 12, covering more than 20 miles each day and, once, more than 30 miles. Conservative calculations placed him three to four days from finishing his journey, but while he made breakfast he said he started to think, what if he could finish the journey in one incredibly long day?

He said he did not share this notion with Jenna Besaw, his wife and expedition manager. What she and his mother, Eileen Brady, a close adviser to O’Brady and Besaw throughout the expedition, hoped for was a 16-hour, 40-mile day on Christmas.

For most of the expedition, O’Brady had stopped most nights at around 8 p.m. after 12 full hours of trekking. For the past two weeks, though, he had been moving until at least 9 p.m. But on Christmas night, the clock ticked past 11 p.m. with no word from O’Brady.

He had glided beyond the 40-mile mark by then, easily the biggest day he had had all expedition, and it seemed to all observers that he would pack it in shortly. But he didn’t. He kept going.

To some following his progress, his decision was unnerving. Under intense stress, the line between lucidity and madness can be fuzzy, and especially so for someone who has been alone for almost two months, trekking miles each day, while doing battle with raging winds, unseasonal snowfall, whiteout visibility and polar temperatures.

Could someone in that situation, exhausted and emaciated, be trusted to make sound choices?

“I can feel myself in a deep fatigue state,” O’Brady said when reached by satellite phone on Dec. 22. “When I was crossing Greenland” — a journey he undertook this summer to prepare for this expedition — “I kind of let my guard down on my last night, and I fell into a crevasse that could have easily killed me. I want to be done badly, but at the same time, it’s about executing all the little things and not make any stupid mistakes at the end.”

At around 1:30 a.m. Chilean time, O’Brady finally called to check in with Besaw. O’Brady’s mother was also on that call, along with his stepfather. They peppered him with questions, testing his lucidity: Had he consumed enough calories? Was he stopping to boil more water? Was he refueling properly?

What they also tried to determine, Besaw said, was whether O’Brady could describe what he had been through during the day, and if he understand what was to come and what it would require to make it to the end.

“We had an open and honest and smart conversation with him,” Besaw said, “and he totally delivered.”