Joe Cleary didn’t have a Better Than Ready marked in his Magic Millions catalogue last year, but was taken when a filly walked past him.

She would become Girls Are Ready and could take him back to the Gold Coast for the Magic Millions Classic next month. 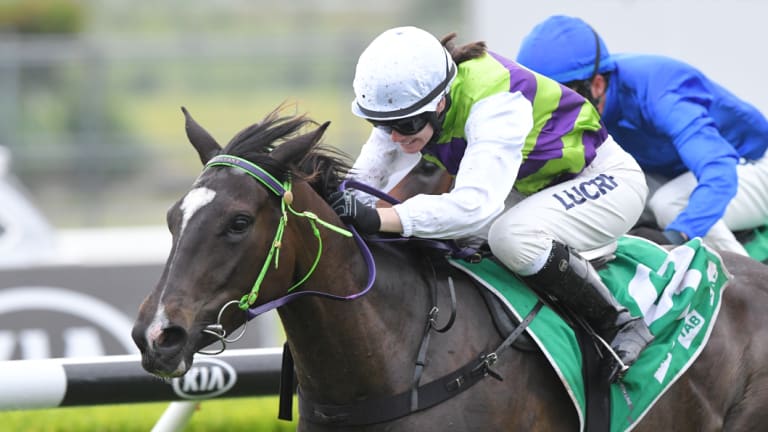 Ready to step up: trainer Joe Cleary has Girls Are Ready aimed at a Magic Millions tilt.Credit:AAP

“She literally walked past me and I had a look at the number and looked her up in the book,” Cleary said. “I went back to the bar had a schooner and then went out in the ring and $30,000 later, I had a horse.

“It is a ladies syndicate. I gave my mum a share for her birthday and my wife a share so I wouldn’t get divorced and there are different friends in her.

"It is working out well.”

It has proven a good purchase with Better Than Ready's stock being the early boom of the first-season stallions with six winners already, including The Odyssey and Better Reflection pairing which took out the listed double in Brisbane last Saturday.

Better Than Ready sits equal with I Am Invincible at the top of the two-year-old sire list.

Cleary’s filly Girls Are Ready gave the stallion his first Sydney winner when she waltzed away from her rivals at Canterbury last Friday and he is eyeing the Gold Coast and the Magic Millions Classic.

“I didn’t really think she would make the race but she is well in the hunt and if she was to run in the first three on Saturday that would just about get her in,” Cleary said. “When I looked at the order of entry there are only about four ladies syndicate horses in the top 25, so with the bonus in play we would love to be in a race.

“Since she has won I have quickly got about seven assistant trainers but they are having fun and I think she will run well again on Saturday.

“We are going to take her up to Queensland any way because being a QTIS horse she could run in a bonus the week after the Millions.

“But I just have to get her in the Millions now because they are so excited.”

Girls Are Ready showed the benefit of her race experience at Canterbury after running third to Aeecee Vinco, a rival again on Saturday, at Canberra last month.

She enjoyed the heavy conditions at Canterbury, settling back and running over the top of Devachan late to win.

“She is continuing to improve but she is taking on some good ones. Hopefully she can prove that she is up with them and we can book our tickets for the Gold Coast,” Cleary said.

Cleary has kept Jess Taylor in the saddle on Girls Are Ready and she will be on his runners in the first three races on the Warwick Farm card.

Tag And Release is an outsider in the Highway Handicap and comes to town after wins at Moruya and Queanbeyan before a disappointing fourth at Sapphire Coast last start.

“This race comes at the right time for him and there is another suitable race in a couple of weeks,” Cleary said. "The mile is a little question."

In the third Lucy Rose, a winner of eight of her 16 starts, returns from a freshen-up. Cleary hopes to develop her into a Kosciuszko horse next year.

“She is a good little sprinter and you have to start the campaign to get into a Kosciuszko now, so people know who she is,” Cleary said. “She will have a couple of summer runs and then we will look to getting her into some better class races.”