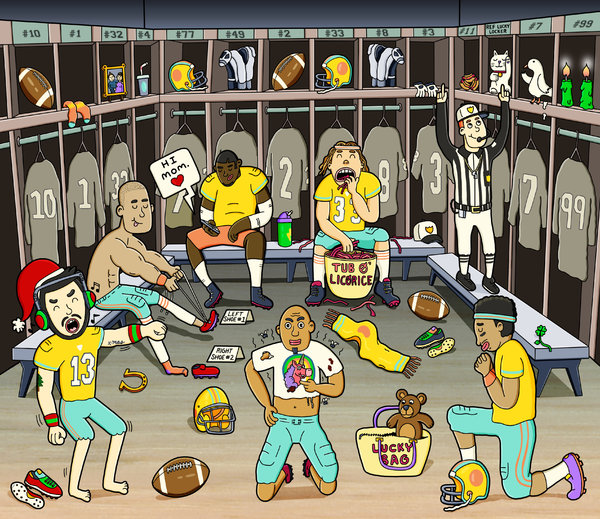 In the N.F.L., where the wait between most games is a long, charged week, tales of eccentric pregame rituals in the final jittery moments before kickoff have become a fabled part of the sport’s lore.

If, for example, a team is on a win streak, superstitious players might make sure to put on their uniforms exactly as they had in previous weeks: left sock first, then the right sock; left pant leg before the right pant leg, and so on.

Or, a motivational sign above the locker room door could be considered a good-luck charm and be tapped, or slapped, as everyone exits the room. A team might also file onto the field in the same numerical order week after week — all in the search of positive juju.

But this is the modern N.F.L., a multibillion dollar enterprise celebrating its centennial next season. Surely, mystical rituals are abating in the analytics era, right?

In fact, they are as entrenched as the laces on the football. At best, they are evolving.

Philadelphia center Jason Kelce, for instance, likes to listen to Christmas music before games, even in September.

“To take the seriousness out of things,” Kelce said. “I want to hear something happy. It lets me go back to childhood memories — happy times.”

Kelce did concede he is listening to less pregame music in an effort to cut back on certain repetitive behaviors, although maybe not for the most obvious reasons.

“My wife is superstitious enough for both of us,” Kelce said with a laugh. “If we win a game, she’ll do everything the same that she did the week before. Same routine in the morning at home as the week before. Drive the same route to the stadium as the last week. The whole thing.”

Giants quarterback Eli Manning at first insisted he had no special pregame ritual. Then he remembered the T-shirt he wears under his equipment. During each of the 16 regular season games, Manning wears the same T-shirt. (It is laundered after each game.)

During the preseason, Manning carefully picks out the T-shirt — from dozens of candidates — that will be his “gamer” undergarment.

“I get that one ready early, just get the sleeves cut to the length I want and just make sure it’s comfortable and I’m good with it in all kinds of different ways,” Manning said as if he were explaining how he chose which house to buy and live in. “Then that T-shirt is on the loop going forward. All 16 games.”

He added: “But I don’t really have any superstitions.”

Some players openly acknowledge their devotion to elaborate pregame rituals, including the time-consuming, pedantic left sock/right sock progression that is apparently still in vogue.

“Those kinds of rituals are still very common,” said Giants long snapper Zak DeOssie, who like Manning is a 15-year veteran of the N.F.L. “How can you ignore it? Obviously, we’re all professionals and work hard to develop certain skills, but the game is played with a funny shaped ball that takes crazy bounces. All of the athleticism in the world can’t and won’t control those bounces.

“So you’re figuratively praying to the football gods, hoping they’ll be on your side that day.”

On the other hand, Washington kicker Dustin Hopkins willfully keeps a higher power in mind before games for a different goal.

On arrival at the stadium, Hopkins gets adjusted by a chiropractor. He then has the strength and conditioning coach use a rolling pin-like device to loosen his muscles and then takes a shower to make sure he is, as he said, “awake.”

Hopkins is also persnickety about double-checking that every helmet chin strap or shoe string is not worn or frayed. He jogs onto the field and warms up with about 30 kicks.

And during that entire time — from chiropractor to field goal attempts — he is praying. Among other things, Hopkins prays for the safety of his teammates, his opponents and himself.

The veteran Baltimore safety Eric Weddle, meanwhile, is purposefully trying to avoid a different longstanding pregame ritual — the on-field scrum where players jump up and down in a circle and ceremoniously, usually violently, bang into each other. 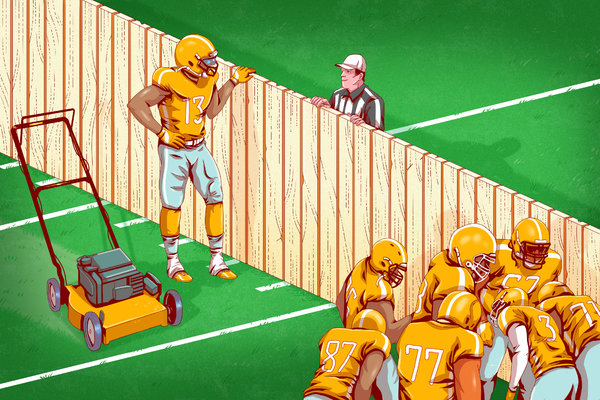 “That’s one of those pregame football things where guys like to butt heads or slap a helmet, but I hate when people hit my helmet,” Weddle said. “I tell them to get away from me.

“It’s a ritual but guys know to keep me out of it. If a rookie or a new guy hits my helmet, I tell them right away: ‘Don’t ever do that again.’ I don’t need to get psyched up for the game; I’m already pretty motivated.”

Some players’ rituals are pretty straight forward. Before every game, Giants linebacker Alex Ogletree makes sure he munches from a bag of Twizzlers — and only Twizzlers, not some other licorice. Several hours before every game when the grandstands are empty, Washington wide receiver Jamison Crowder methodically walks the length of the stadium field by himself twice. He then sprints across it twice. The goal, he said, is to feel the karma of the place.

“Each field and every stadium has its own feel but you’ll never grasp it when the place is full and 70,000 people are screaming at you,” Crowder said. “You have to go out when it’s quiet. Just you and the field.”

Baltimore receiver Willie Snead does something almost transcendental as well, carefully making his way around the entire field. It is a ritual he learned from Jerry Rice, who holds most of the league’s pass-catching records.

“He went onto the field and visualized himself making plays while running certain pass routes,” Snead said of Rice. “It makes you comfortable in the environment.”

There are, however, some players who swear off a pregame routine of any kind.

“I’m afraid a pregame ritual could add to the anxiety of the moment,” Redskins defensive end Ryan Kerrigan said. “What if I decided to eat a certain food before every game but one week we’re in Philadelphia and they don’t have that food? What would I do then? I’d be more stressed.”

But faith in superstitious customs, something observed in civilizations for many centuries, has a powerful allure. Even the N.F.L.’s game officials are not immune to its pull.

Gene Steratore, a longtime referee until his retirement this season, said that a crew of officials will always dress in the same lockers they used the last time they were assigned to work at that stadium.

“It’s amazing, because you might not have been in that stadium for a while, but we wouldn’t dare change our habits,” said Steratore, who is now a CBS rules analyst.

Steratore recalled that one year at Foxboro Stadium in New England, a new attendant was assigned to the officials’ locker room.

“Before we got there, the attendant put name tags on the lockers for the crew,” Steratore said. “We pulled all the tags off the tops of the lockers and arranged them so we were dressing where we always dressed.”

But Joe Theismann, the former Washington quarterback and the N.F.L.’s most valuable player in the 1983 season, said that he believes the N.F.L.’s ritualistic habits, while still patently evident, have ebbed slightly. The players of his era, Theismann insisted, were obsessed with pregame rituals and how they could influence the outcome of games.

“Everybody had something they did because it’s a way to get ready for the game,” said Theismann, who played in the N.F.L. for 12 years. “I was probably the most superstitious.”

Early in his career, Theismann played well after having eaten a banana split the night before the game. For more than 150 N.F.L. games thereafter, he insisted on having a banana split the evening before any contest, even if meant going into hotel kitchens and making the dessert himself.

On game days, he also had a meticulous routine for putting on his uniform, and he would then lie on a bed of towels he constructed in front of his locker, where he would always read People Magazine cover to cover.

“We had a Redskins logo near the locker room door and for 12 years on the way out I hit that logo for good luck and never said a word,” Theismann said. “But on the night I got hurt, I hit that logo — and probably because we in the midst of a lousy season — I said: ‘Tonight, your life’s going to change.’ ”

In the game that night against the Giants, Theismann broke his leg in two places. He never played football again.

“It’s interesting to think about it now,” Theismann said. “Changed the routine and my life really did change completely.”