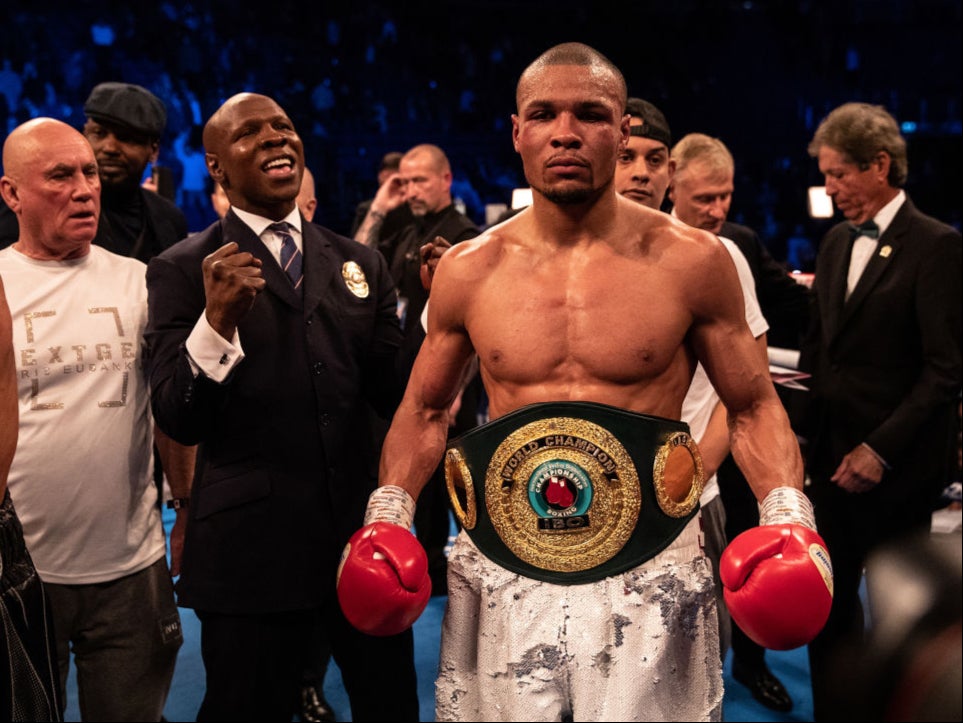 “Eubank will be out in April, in the summer and then at the end of the year. That’s the plan, but this is boxing,” said Kalle. “We are looking at Golovkin and (Kell) Brook – good fights.” A Brook fight would be a brilliant piece of matchmaking.

“They (the Sauerlands) were in the right place, at the right time and made me an offer I couldn’t refuse,” insisted Eubank, who remains one of the top five attractions in British boxing. “Right now I’m in my prime, I’m the number one contender, I have a new coach, a new promoter and they will deliver. I want Golovkin, it’s that simple.”

Eubank is convinced that he can stop Golovkin, which is bold. Golovkin, however, is showing clear signs – at 38 and after 11 years as a world champion – of slowing down. It is a fight that will transform Eubank, a fight he really could win now, but stood no chance six years ago when he was first linked with the Kazakh.

It was Eubank’s famous fighting father, Chris, who first starting banging the drum for a Golovkin showdown. The veteran was convinced his son would be too quick and smart for Golovkin and at the time he was wrong. Eubank Sr will inevitably be part of the fight team, but Jones will be the chief in the corner, the one voice in a corner that has too often been chaotic.

“The relationship with my father is different,” Eubank said. He is right, it’s far more complex than any other trainer and boxer dynamic in the business; Chris the father is difficult, independent and devoted to his son’s career – trust me, that is a package that no promoter wants to ever deal with. Everybody in boxing has a story about dealing with Eubank, the father. “Chris is his father, I respect that,”said Kalle, who is a slick diplomat in a business of brutish negotiators.

Kalle and Nisse know a thing or two about working in the boxing business with a father, who is also a boxing legend. Wilfred Sauerland, now 80, has loomed over the German boxing scene since the late Seventies, dominated his nation’s boxing business like nobody else anywhere in the world has ever quite managed. World heavyweight champion Max Schmeling and Wilfred are the only Germans in the Boxing Hall of Fame.

Wilfred was prepared for the influx from the East, for the arrival of hungry fighters from across the concrete and barbed-wire wall that divided the city of Berlin and Germany and the rest of the world. He also had the reputation as the man that could fix things for the exiled bruisers from the fallen Soviet Republics. In America the dream turned sour and violent for a lot of forgotten, missing and dead top Soviet amateurs in the late Eighties. It was a vicious time of bloodshed and crazy gangsterism; life for talented boxers from the East was safer, more secure, more lucrative in Germany with the Sauerlands.

The East Germans came with their cheap haircuts and top equipment, then the Polish and then the Uzbekistanis, Russians and Armenians. The East Germans came knocking on his door – his actual door, at home – looking for him to get involved. Wilfred Sauerland was running the boxing revolution from Hamburg, cultivating the tastes of a new German boxing public, getting the world ready for an invasion. The fighters started winning world titles and Henry Maske (East Germany), Marco Huck (Serbia) and Arthur Abraham (Armenia) had over 50 world title fights in total. Wilfred Sauerland was boxing’s man from the East, the promoter who came in from the cold.

It is a family affair and Kalle signed Alexander Povetkin in 2005, a year after Povetkin’s gold at the Athens Olympics. He was the first man from the West to sign a Russian Olympic champion. The Sauerlands also promoted The Beast from the East, Nikolai Valuev, who in 2005, became the first Russian heavyweight world champion. These are markers in the game that count.

“My father knew what to do with the boxers from the East,” continued Kalle. “They were all good amateurs and they needed to be kept busy – it was not just the money, they wanted to fight regular.”

Eubank returned to Pensacola, a place of gators, snakes and fighting cocks – that’s just the fancy cowboy boots – last week; the fight news from Hamburg is coming, the kid from Brighton is back.