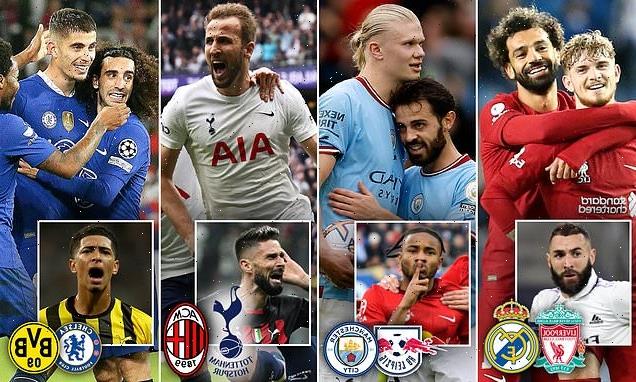 The Inter Milan vice-president Javier Zanetti has given his reaction to their draw against Porto.

‘They will be difficult matches. I know Porto well and my former team-mate [Sergio] Conceicao is doing a great job,’ he told Mediaset.

‘It will depend a lot on the state of form in February. It’s always a Champions League match and we must have the utmost respect for our opponents.’ 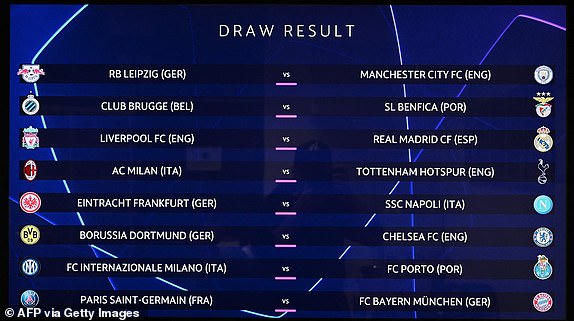 The Bayern coach Julian Nagelsmann has reacted to his team’s blockbuster draw against PSG in then last-16.

‘We weren’t rewarded for our perfect group stage. Paris won’t be overly excited that they’re facing us either. But the game is still far away, there’s the World Cup first.

‘There is no point in thinking about Paris now. Now we have Werder Bremen Bremen, then Schalke and then the World Cup.

‘We’re not going to talk about Paris yet.’

It had to be, didn’t it? Manchester United, having failed to top their Europa League group, have drawn one of the toughest possible opponents in Barcelona.

Napoli coach Luciano Spalletti has reacted to his team’s last-16 draw against Eintracht Frankfurt: ‘Every draw is tough at this level, although we are pleased that we have avoided PSG. Eintracht Frankfurt are still the holders of the Europa League, which is the second-biggest competition in Europe, and they’re on the up as a team. It certainly won’t be easy.’

Liverpool fans are fearing the worst after they were paired with Real Madrid in the Champions League last-16 draw.

Jurgen Klopp’s side were beaten 1-0 by Real in the final in Paris last season, with Vinicius Junior scoring the only goal of the game.

The Reds have struggled for consistency in the league and now face a tough task if they are to progress in Europe.

Next up in Nyon is the draw for the Europa League play-off round, featuring Manchester United.

They will face one of the sides that dropped out of the Champions League and that could be Barcelona or Juventus.

The tie between Bayern Munich and PSG really leapt out from the draw as well.

Plenty of recent history between these two, of course. They met in the 2020 Champions League final, with Bayern winning 1-0 thanks to Kingsley Coman’s goal.

They also played in the 2020-21 quarter-finals and this time it was PSG who emerged victorious over two legs.

They won 3-2 in the Allianz Arena thanks to an inspired Kylian Mbappe performance and then scraped through after Bayern won 1-0 at the Parc des Princes.

The Borussia Dortmund coach Edin Terzic has reacted to drawing Chelsea in the round of 16: ‘We have a top team waiting for us. In Aubameyang and Pulisic we’re meeting old friends. We’re looking forward to seeing you again and of course, we want to make it through to the next round.’

Liverpool and Real Madrid share a rich history of course, so maybe there was an inevitability they’d be paired together again.

The worry for Liverpool is that they don’t have the best recent record against the Spaniards.

They met in the final back in May, with Vinicius Junior winning the trophy for Real. The Bernabeu club also got the better of Liverpool in the 2018 final.

Their last two-legged meeting was the 2020-21 quarter-final, when Real triumphed 3-1 on aggregate.

3 – Liverpool have lost all three of their UEFA Champions League meetings with Real Madrid when facing them as the holders of the competition, scoring just one goal and conceding seven. Mentality. #UCLdraw pic.twitter.com/BmwIVp0YXI

The exact schedule will be announced today by 5pm UK time at the latest.

City certainly have a good Champions League record against German clubs, which bodes well for their meeting with RB Leipzig.

They met only last season in the group stage – there was a madcap game at the Etihad, which finished 6-3 in City’s favour despite a hat-trick by Christopher Nkunku for Leipzig.

But the Bundesliga club won the return match in Germany 2-1.

1 – Manchester City have lost only one of their last 17 matches against German sides in the UEFA Champions League (W14 D2), although that defeat came away at RB Leipzig in December 2021. Warning. #UCLdraw pic.twitter.com/HGBDBhpB23

Chelsea looked impressive in their group stage campaign, which started with Thomas Tuchel in charge and ended with four straight wins under Graham Potter to secure top spot.

But there are plenty of connections between the two teams, of course. Tuchel was one, but current players Pierre-Emerick Aubameyang and Christian Pulisic know Dortmund very well.

Antonio Conte has an excellent record against AC Milan from his time in Italy, as the tweet below says.

The last time Spurs met Milan in the Champions League, back in the 2010-2011 round of 16, they did emerge victorious thanks to a 1-0 win at San Siro. Peter Crouch scored their winner 10 minutes from the end, the only goal of the tie.

10 – Tottenham’s Antonio Conte has won more matches in all competitions against Milan than he has versus any other side in his managerial career. Edge. #UCLdraw pic.twitter.com/KQjnODzpLu

So, there we have it. A fascinating last-16 draw in the Champions League.

The tie between Liverpool and Real Madrid stands out, of course, being a rematch of last season’s final that the Spanish club won 1-0 in Paris.

That was always the danger for Liverpool that they would face a very strong side having finished second in their group.

Chelsea will take on Borussia Dortmund in the first knockout round, while Manchester City also head to Germany to play RB Leipzig.

Tottenham will head to San Siro to play AC Milan, the Italians finishing second behind Chelsea in their group.

Elsewhere, it will be Club Brugge vs Benfica, Eintracht Frankfurt vs Napoli and Inter Milan vs Porto. 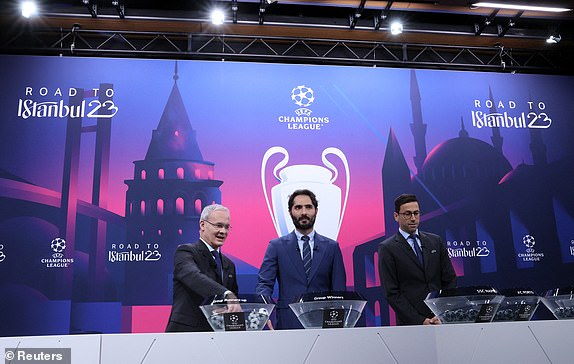 Marchetti giving us one final run-down of the 16 teams in the draw and we should be about to get started.

Today’s special guest is Hamit Altintop, the former Turkey midfielder and ambassador for the final, which will be held in Istanbul.

He is on stage waxing lyrical about how exciting the group stage was.

And here is Giorgio Marchetti, the UEFA deputy general secretary and draw doyen, on stage to introduce how the draw will work. 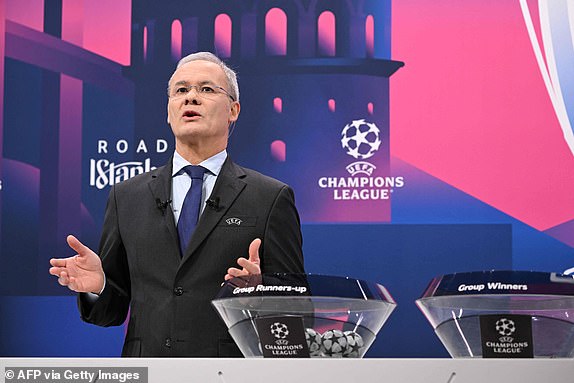 Here’s host Pedro Pinto to welcome us to the last-16 draw. No doubt there will be plenty of filler before the draw actually gets underway, so hang tight.

First up a video montage reminding us of the 16 teams that have made it through.

Right, time for a bit of Zadok the Priest and the Champions League last-16 draw ceremony can get underway. 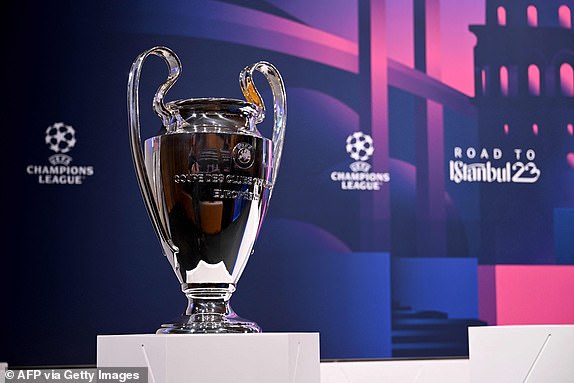 The hall filling up in Nyon with club delegates as we fast approach the start of the Champions League last-16 draw.

Here’s a reminder of the teams involved: 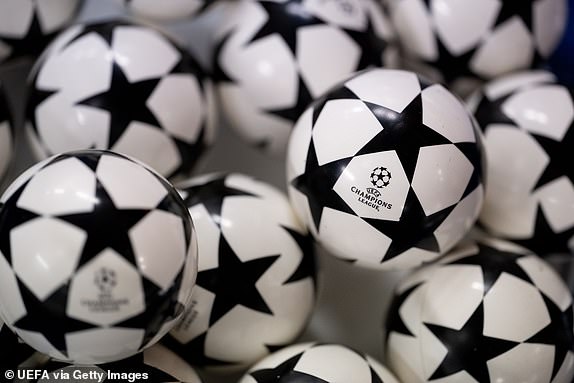 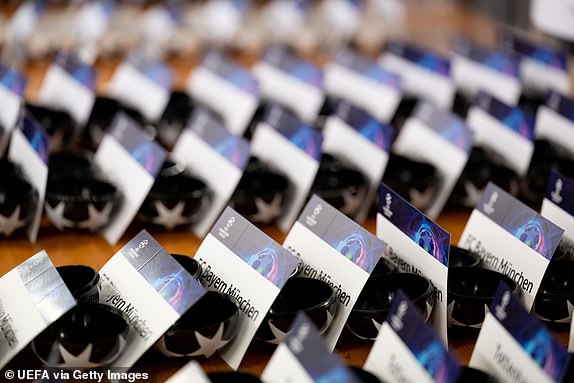 Jurgen Klopp hailed Mo Salah as one of the truly great strikers and said football fans in the future will one day reflect on his incredible statistics and appreciate just how special he has been.

Salah scored twice in a 2-1 win at Tottenham, clinching Liverpool’s first Premier League away win of the season and taking his personal tally to 14 in all competitions.

‘When you look back, everybody will remember one of the best strikers you ever saw because numbers will be absolutely insane,’ said Klopp. ‘He scored two goals and played like a real team player. Top performance and outstanding attitude.’

Antonio Conte was upset to hear Tottenham booed off by their own supporters and issued a veiled threat, hinting he will not stick around if there is no ‘enthusiasm’ and ‘passion’ for him to feed off.

‘We have to show in every moment great respect for our fans,’ said Conte. ‘They are our fans. They pay for the tickets. At the same time, if you ask me if I was a bit disappointed, yes… because it’s important in every moment to be honest.’

Spurs were loudly booed down the tunnel at half-time, trailing 2-0 against Liverpool having conceded the first goal for the sixth successive game. Harry Kane reduced the deficit in the 70th minute but they could not find an equaliser.

PETE JENSON: Most of Spain will switch the television off midday Central European Time on Monday.

Real Madrid apart, the draw for the Champions League last-16 does not involve Barcelona and Sevilla; and Atletico Madrid don’t even need to switch back on for the Europa League draw.

Spanish radio Cope statistician Pedro Martin did the maths on the morning after the final night of the dismal group stage – in the 24 games played involving Spanish teams there had been eight wins, six draws and 10 defeats.

After the Champions League draw is done and dusted at UEFA HQ, we also have the Europa League and Europa Conference League play-off round draws.

Manchester United will be in the Europa League draw having finished second behind Real Sociedad, putting them on a collision course with a Champions League drop-out in February.

You can find out who they could face by clicking below.

Liverpool have almost a 40 per cent chance of drawing Bayern Munich in the Champions League last-16 – with one of the English clubs likely to get Inter Milan.

A calculation of probabilities for each pairing in Monday’s draw shows that Jurgen Klopp’s side, who finished second in their group, could face a tough test against the German champions.

The Reds have a one in five chance of drawing Real Madrid, who beat them in last season’s final.

The draw for both the quarter and semi-finals will take place on March 17, and this where things get particularly interesting with teams from the same country allowed to play against each other at this stage.

The final, being played in Istanbul next year, will be played on June 10.

Who were the best side in the group stage? 🤷‍♂️ #UCLdraw | 12:00 CET pic.twitter.com/uf0yknOhbQ

The seeded teams will be drawn against one of the runners-up. However, there are certain stipulations.

Sides who were in the same group cannot be drawn against one another. For example, Chelsea can’t be drawn to play AC Milan again at this point.

And teams from the same country cannot be drawn against each other. So we’re not going to see any all-Premier League showdowns in the last-16.

The seeded team will have the advantage of playing at home in the second leg, with the first leg away.

First things first, here are the 16 teams that have made it through the group stage.

After a compressed Champions League group stage because of the upcoming World Cup, 16 teams are left standing in Europe’s top competition.

This morning, we will discover who they’ll all be playing when it resumes in February as the draw for the first knockout round is made at UEFA HQ in Nyon, Switzerland.

We have four English representatives left with Chelsea, Manchester City and Tottenham among the seeded teams after topping their groups.

Liverpool made it through in second spot in their group, meaning they will be unseeded and will face one of the group winners.

From Spain, only Real Madrid made it through from their four representatives but they are the reigning champions and a team to avoid.

Likewise, Paris Saint-Germain, who came second in their group and will be lurking for three of the English clubs.

Welcome along to our live coverage of the last-16 draw, which gets underway at 11am UK time. 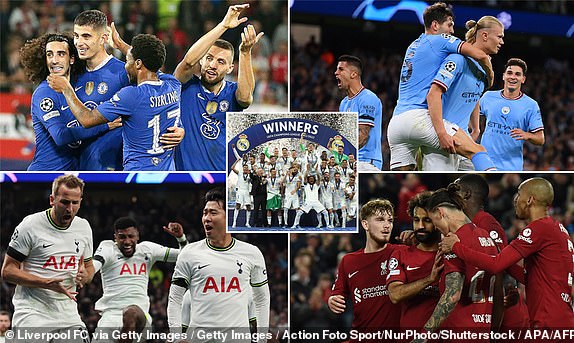