Sophie Rolfe wakes up every morning at 2.30am and 10 minutes later she's in the stables at Thoroughbred Park looking after her father's horses.

Sunday she gets a "sleep in" and starts at 6am. 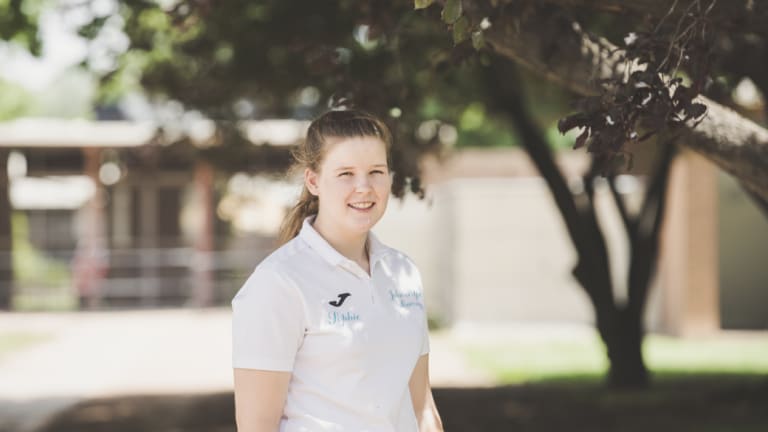 Sophie Rolfe is the recipient of a $1000 grant for women in racing.Credit:Jamila Toderas

Rolfe is also half way through an equine science degree and admits she couldn't be a stable hand if she didn't love it. But now she'll get some extra help.

The 20-year-old was awarded the inaugural Women in Racing bursary created for young females in the industry and was presented with a $1000 cheque at Thoroughbred Park on Sunday.

"I wake up at 2.30am and am at the track by 2:40am because we’re very close. At that time it's quieter and there's less risk of the horses getting injured," Rolfe said.

"I can sleep any time any where, I usually get home around 6am and go back to bed for a few hours then study.

"The winter mornings are freezing cold, I wear four jackets. So you've got to love it and I do."

Rolfe is studying at Charles Sturt University and is in the top five per cent of her class. The bursary came from Karen Ruse who started it in memory of her father.

"The winner was somebody who wanted to study further in the racing industry," Rolfe said.

"Earlier this year I lost two of my beautiful thoroughbreds, one during a race, and the other to colic unexpectedly.

"These two heartbreaking moments have stemmed my desire to follow on from the equine science degree with veterinary science."

Newly appointed Canberra racing boss Andrew Clark said it was a great initiative and that Rolfe was more than deserving.

"We are very supportive of the work of Women in Racing are doing and setting up the bursary we’ll look to continue that support into the future," Clark said.

"It's fantastic for Sophie and great for her studies, I can relate because I worked at the track when I was studying.

"It's a tough path so any support is brilliant and Sophie looks to have a bright future in industry which we want nurture."

The day after Canberra trainer Matt Dale won the Highway Handicap at Randwick and his stable star Fell Swoop made an emotional return to the winner’s list, he saluted in two more races at Thoroughbred Park on Sunday.

But it was Mike Cattell who took out the $50,000 Federal with Just Dylan beating Magic Over The Bay by half a length.