Kato Ottio joined the Canberra Raiders with just one goal – to build a house for his mother.

His dream has now been realised and his memory will live on through the new Ottio family home, tinged in Raider's lime green.

The new home and a memorial headstone were unveiled in Tatana village, not far from Port Moresby, the capital of Papua New Guinea, on Wednesday – exactly a year after his death.

It was built on stilts over the sea in the same spot as the family's home for the previous 13 years, with the family reportedly having to move out and live with their grandparents during construction.

Ottio started out playing volleyball for Papua New Guinea, but he joined the Raiders at the start of the 2016 season to pursue a career in rugby league.

While he never made his NRL debut, he became a a top-class finisher with the Mounties in the NSW Cup before injuring his knee.

At the end of his two-year contract with the Green Machine, Ottio was set to join Super League club Widnes Vikings just days before he died.

The rugby league world immediately rallied, with both the Vikings and the Raiders raising money to help make Ottio's dream come true.

Widnes raised about $27,000 through a crowd-funding site and bucket collections, while the Raiders raised a similar amount through their gofundme page and auctioning the Indigenous jerseys they wore against the Cronulla Sharks last year. 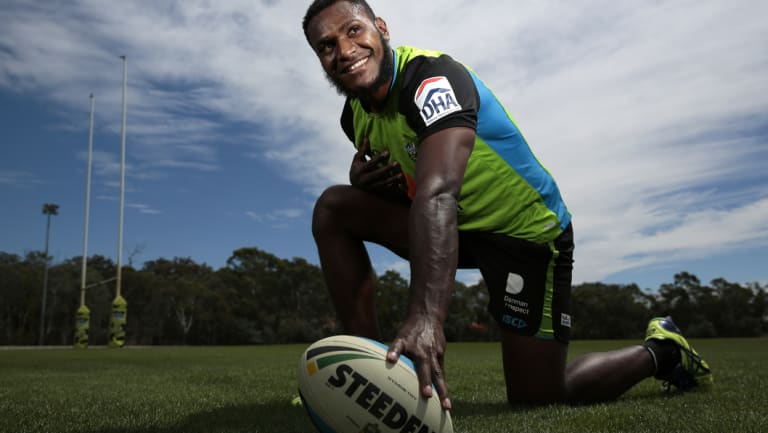 The Raiders were also looking into setting up a scholarship to help produce the next generation of Papua New Guinea rugby league players.

They honoured his memory at their first home game of the 2018 NRL season, flying members of his family, including his mother Joyce and brother Ahulo, with a moving ceremony after the match against Newcastle.

"He would go out of his way to make life good for other people. Seeing them smile was his own satisfaction. It is really good to come out here," Ahulo said at the time.

"Mum wakes up every morning since Friday, she is in Canberra, she cannot stop crying. She walks the streets thinking 'my son walked here'. Coming here you couldn't stop this lady from crying.

The man whose smile could light up a room has now managed to put a smile back on his family's faces with a home that will be forever green.