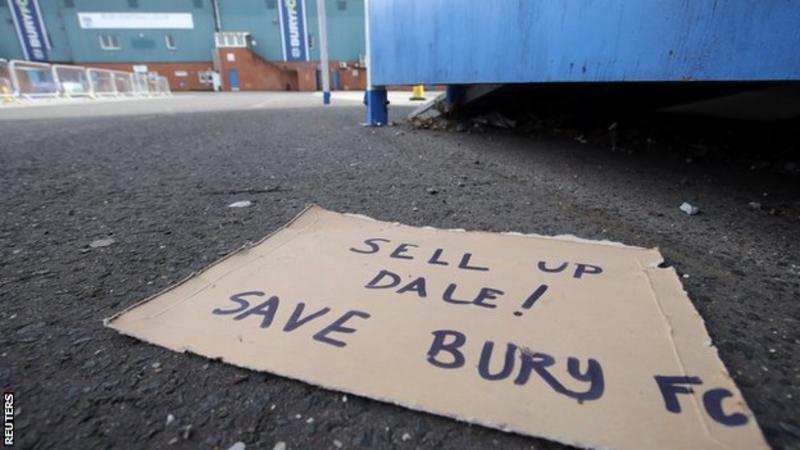 Bury have been given until 17:00 BST on Tuesday to complete a sale that would prevent them from being expelled from the English Football League.

The League One club had originally been given until 23:59 BST on Friday to prove they could pay off creditors and had funding to complete the season.

The Shakers have not played any of their first six games of the season.

Their first five league matches were suspended by the EFL and they have also been withdrawn from the Carabao Cup.

“The board has considered the evidence presented and has determined, in a final effort to allow the club the opportunity to survive, to grant an extension and work exclusively with the club and C&N Sporting Risk to see if a takeover is possible,” EFL executive chair Debbie Jevans said.

“No one wants to see a club lose its place in the league and we will now work with the potential purchasers over the weekend and ahead of the Tuesday deadline in an attempt to find the solutions required for a sale to take place.”

Following a meeting by the EFL board on Saturday morning, the league said that no further Bury fixtures would be suspended because of the integrity of the competition and the impact on other clubs in the division.

Although no formal sale of the club has been completed, the EFL said they had received “enough credible information” to allow the club to work over the Bank Holiday weekend to finalise a change of control at the Shakers.

In a statement released to PA Media on Friday, prospective new owners Rory Campbell and Henry Newman confirmed they had been in discussions with Bury FC, the EFL and others to buy the club.

They added: “It is a very complicated scenario and there remain a number of outstanding legal and other issues that have to be addressed.

“Our background is in football and data analytics and it should therefore not be surprising that we are taking a very detailed forensic look at the realities of Bury FC’s finances.”

Jevans had previously said that a short extension to the Friday deadline may be granted if a buyer could be found.

No club has been removed from the EFL since Maidstone were liquidated in 1992.

How did we reach this point?

At the end of April, Bury were celebrating promotion back to the third tier of English football, but they were already enduring a torrid time off the pitch.

Players and staff had often been paid late, while a winding-up petition filed against the club was adjourned three times before eventually being dismissed by the High Court on 31 July.

By then, creditors had approved a company voluntary arrangement (CVA) put forward by Dale, which was proposed to help settle some of their debts.

The CVA meant unsecured creditors, including HM Revenue & Customs, would be paid 25% of the money owed – but also triggered a 12-point deduction in the League One table under EFL rules.