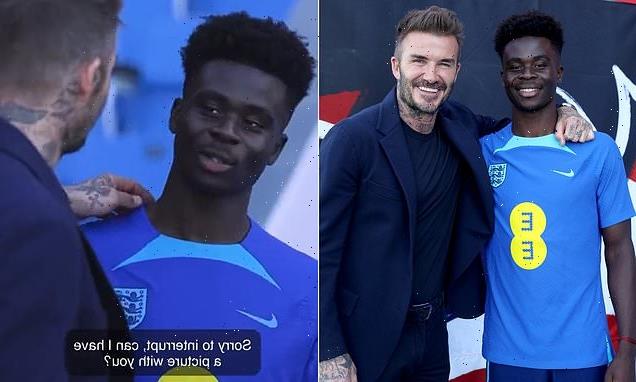 ‘Sorry to interrupt, can I have a picture with you?’: Starstruck Bukayo Saka sheepishly asks for a photo with David Beckham… and the ex-England captain duly obliges as he visits their training camp ahead of France clash

England fans have called for Bukayo Saka to be protected ‘at all costs’ after a video emerged of him sheepishly asking David Beckham for a photo out in Qatar.

Beckham visited England’s training camp ahead of their last-16 clash with Senegal on Sunday evening. He chatted to several players and received his legacy shirt from Gareth Southgate.

Saka took the opportunity to politely ask Beckham if he could have a photo and fans couldn’t help but talk about the heart-warming moment. 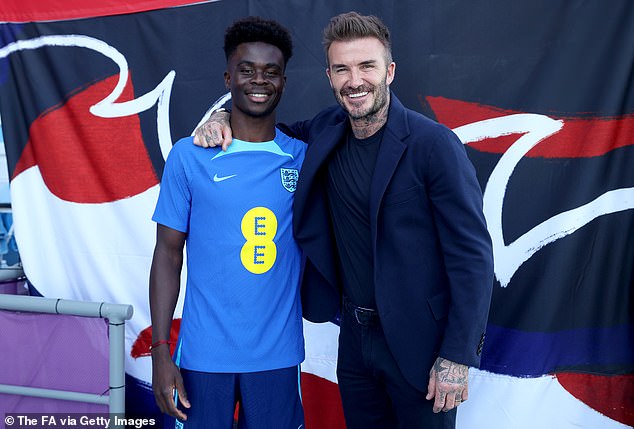 Beckham was standing chatting to Southgate and current England captain Harry Kane when Saka swooped in for a photograph.

Saka, who would have been just 12 years old when Beckham hung up his boots in 2013, was seen sheepishly approaching the group before turning to Beckham and saying: ‘Sorry to interrupt, but can I have a picture with you?’.

Beckham – who scored a sensational goal against Greece in 2001 when Saka was barely a month old – smile and put his arm around the Arsenal starlet.

The pair posed for a photo in the Lions Den. Beckham also had photos with the likes of Jack Grealish, James Maddison and Trent Alexander-Arnold. 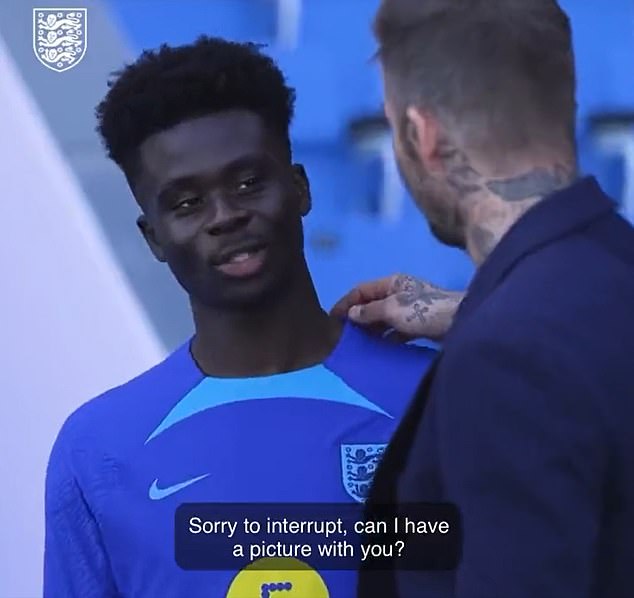 Fans were quick to comment on the video of Saka. One wrote: ‘Beckham should be the one asking Saka for a photo’, while another added: ‘My love for Saka is growing by the day’.

One England fan took to Twitter to say: ‘A beautiful being. Who has clearly been so well brought up.’ While another wrote: ‘He’s the sort of guy you want to marry your daughter!’.

Southgate was the one who invited Beckham to visist the England squad ahead of their last-16 clash with Senegal. He thought that players would benefit from his experience.

Beckham captained his national side from 2000-2006, and featured at five major tournaments for the Three Lions.

Kane spoke about his encounter with Beckham on England’s YouTube channel. He said: ‘Becks went to my secondary school, Chingford Foundation.

‘We both played for Ridgeway Rovers, our Sunday league team. He was my biggest idol when I was growing up. 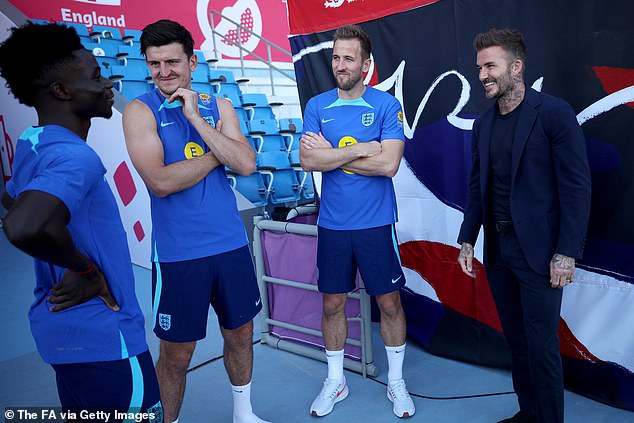 ‘He was here the other day. We had a good chat. He was one of the best captains we ever had.

‘I didn’t just ask questions about games or how he felt, it was more just getting to know his experiences, how he feels about our team, what he sees in our team.

‘We had a chat about loads of things. He’s really excited for the national side. He loves watching us play.

‘It’s great to have support from ex-players. They know how much it means to represent your country. They’re all part of the team.’