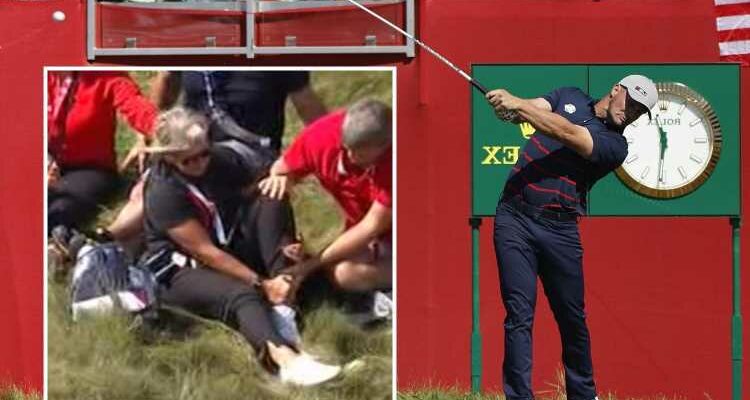 BRYSON DeCHAMBEAU'S first drive at the Ryder Cup accidentally HIT a female spectator in the ankle.

The American produced a wild opening tee shot in this afternoon's Fourballs which landed on the seated fan at Whistling Straits.

DeChambeau, 28, unleashed a drive to the left of the green at the reachable par-4 first hole and it came down onto a grass verge where a number of spectators were sitting.

The 2020 US Open champion made it up to the stricken women by giving her a signed golf ball as an apology.

LA Times reporter Sam Farmer is covering the event and said the woman was not badly hurt.

Farmer tweeted: "Talked to the Indianapolis woman who was plunked by Bryson Dechambeau’s opening drive.

"Thing came screaming in hot after 330 yards and drilled her ankle.

"She was fine and get a signed golf ball for her efforts. Felt like she won the lottery."

The noise of the raucous crowd meant nobody heard if DeChambeau shouted 'fore' – the customary call used to warn anyone standing or moving in the flight of a golf ball.

DeChambeau managed to regain his focus after the incident to hit a remarkable up-and-down for birdie to halve the opening hole.

He had missed out on the morning foursomes on day one but was sent out for the afternoon fourballs alongside Scottie Scheffler to face Jon Rahm and Tyrrell Hatton.