DES MOINES — Issues of race and diversity took center stage at the 2020 Brown and Black Forum in Des Moines on Monday, just two weeks before the Iowa caucuses and as concerns have ratcheted up that the Democratic presidential field has shed its highest profile candidates of color.

The forum moderators immediately questioned whether Iowa, which has a population that is 90% white, is at fault.

“It’s an important question to ask,” Bennet said. “Now that I’ve spent the last year in Iowa and New Hampshire, I’ve realized how seriously people here and in New Hampshire take this.

“And that means a lot because I believe our democracy is at real risk. I think we’re in real danger of losing the democracy, (by not) having people face-to-face.”

Bennet was the only candidate directly asked about Iowa’s standing as the first-in-the-nation caucus, though others highlighted their ability to attract supporters of color no matter where those voters live. 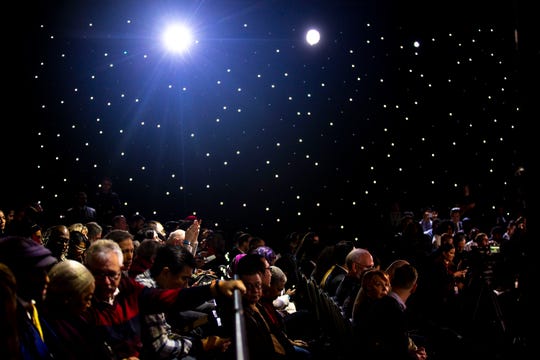 People in the crowd listen to Democratic presidential candidates answer questions during the Brown and Black Forum on Monday, Jan. 20, 2020, at the Iowa Events Center in Des Moines. (Photo: Kelsey Kremer/The Register)

The candidates were asked questions about a range of issues affecting communities of color, including maternal health care, poverty and minimum wage. They were also pressed about their records on immigration and their popularity with Americans of color.

A Washington Post-Ipsos Knowledge Panel survey earlier this month found that Biden holds a substantial lead with black Democrats nationally, with 48% of the support. Sanders holds 20%, Warren, 9%, and Buttigieg, 2%.

In one of the more personal questions of the day, Biden was asked whether the Democratic Party takes the black vote for granted.

Biden spoke of his time working as the only white lifeguard at a predominantly African American pool in Wilmington, Delaware. He said that helped him better understand issues facing the black community. He also pointed to his record of working in the black community as the reason for his decades-long career in politics.

“I have spent my whole career with the black community,” he said. “They know me. They know where my heart is. And they know what I’ve done. And I’m very proud of it.” 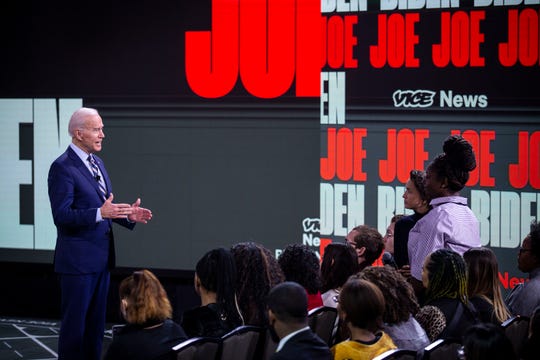 Former Vice President Joe Biden speaks to the crowd and takes questions during the Brown and Black Forum on Monday, Jan. 20, 2020, at the Iowa Events Center in Des Moines. (Photo: Kelsey Kremer/The Register)

Buttigieg, who holds strong support in Iowa and New Hampshire, but has failed to gain traction nationally, was asked specific questions about outreach to black communities, issues with black policing and the number of black police officers in the city he recently ran. But the former mayor steered his answers to broader issues facing non-white Americans.

For a question about infant mortality in black communities, Buttigieg pivoted from his specific answer — provide training to overcome implicit bias, and fire health care providers who exhibit overt racism — to the need to have a president who sees the breadth of damage caused by racism.

Yang, the only candidate of color at Monday’s forum, delivered one of the few lines to draw spontaneous applause when asked about disparities in health care among people of color compared to white Americans.

“Unfortunately, it’s just more stressful being black in this society than it is being white,” he said. “And so you have rampant health problems as a result of that.”

Part of fixing that problem, he said, is ensuring that people of color feel they can make ends meet and are secure about their future — an issue he says can be addressed with his proposed $1,000 per month Universal Basic Income. 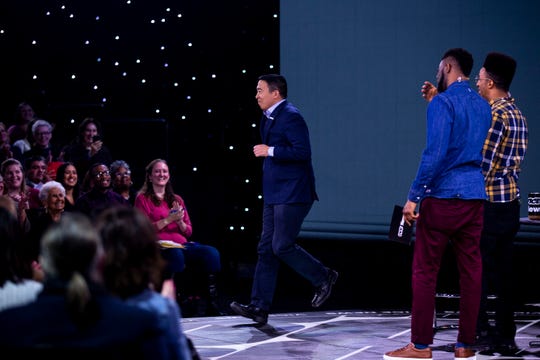 Andrew Yang speaks to the crowd and takes questions during the Brown and Black Forum on Monday, Jan. 20, 2020, at the Iowa Events Center in Des Moines. (Photo: Kelsey Kremer/The Register)

He focused a majority of his 25 minutes bringing questions about issues facing communities of color back to his signature UBI. Asked how he’d address white supremacy as president, Yang said UBI would provide extra income that some might donate to nonprofits or religious organizations, which then would have the resources to mentor young people and steer them away from extremist ideologies.

“That would end up fueling many more positive paths forward for young people, instead of having them just get lost and feel like they have no future,” he said.

Sanders was asked to clarify his proposed moratorium on deportations. He said it wouldn’t apply to people in the United States without authorization and who committed “horrible” crimes. But he maintained that he would end immigration raids and “the terrorization” of immigrant communities.

Later, the senator said he wouldn’t commit to tearing down President Donald Trump’s wall on the southern border.

Sanders called the wall “symbolic” of Trump’s effort to divide the country and demonize immigrants. But if tearing it down would cost billions of dollars that could otherwise be spent on combating domestic issues like homelessness, Sanders said that would be a consideration.

Sanders has said his universal programs would disproportionately benefit non-white and historically marginalized communities. A moderator asked if those programs were too radical. Sanders responded by rattling off his platforms, one-by-one, and asking the crowd if each was a radical position.

The crowd responded louder and louder with “no” to platforms like guaranteed health care, a higher minimum wage, tuition-free public colleges and universities, immigration reform and more. 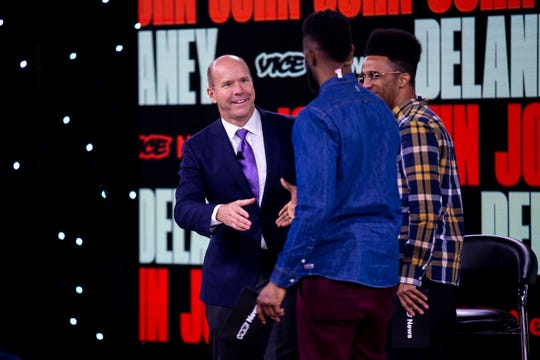 John Delaney speaks to the crowd and takes questions during the Brown and Black Forum on Monday, Jan. 20, 2020, at the Iowa Events Center in Des Moines. (Photo: Kelsey Kremer/The Register)

Unlike other candidates, Warren was given time to deliver large pieces of her stump speech, specifically highlighting her view that government only works for the rich and powerful and her signature 2% wealth tax, a plan that would, in part, invest $50 billion into historically black colleges and universities (HBCUs).

The moderators asked Warren if that piece is “too good to be true,” and whether it would be subjected to cuts as a compromise with lawmakers before her wealth tax is passed as legislation. After a long-winded answer, in which Warren highlighted her father’s low-wage job and her $50-per-semester college education, she ultimately said no.

“If you’re asking the question, am I committed to education? Am I committed to opportunity not just for some people but for everybody? The answer is yes,” she said, before being pressed by the moderators to specifically say whether the HBCU plan would be dropped from her wealth tax.

“I’m not dropping the HBCU plan,” she replied.

Warren was also asked how she can promote her plans, many of which address issues facing communities of color, to white Americans — particularly Trump supporters — who may feel like their needs are threatened. She said Trump’s strategy is to pit people against each other so they ignore what she calls a corrupt presidency, when the focus should be on how government doesn’t work for the average American.

“You can’t back down from a bully. You can’t be weak in front of a bully. But then you’ve got to talk about the positive vision,” Warren said. “This can’t all be about Donald Trump.”

Nick Coltrain is a politics and data reporter for the Register. Reach him at ncoltrain@registermedia.com or at 515-284-8361.

Kim Norvell covers growth and development for the Register. Reach her at knorvell@dmreg.com or 515-284-8259. Follow her on Twitter @KimNorvellDMR.