Anonymity is a blessing for Manny Ramirez, the Boston Red Sox legend who you might spot roaming the streets of Sydney over the summer.

For baseball in Australia, it's also the exact problem he’s here to solve. Can the presence of a 12-time Major League Baseball all-star help shift the dial for America's pastime down under? The early signs are both promising and slightly depressing; hilarious and telling. 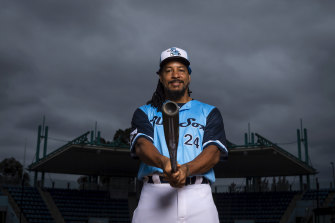 Manny Ramirez is one of the most iconic players in baseball history, and a major coup for the Australian Baseball League.Credit:Rhett Wyman

"So I'm living in the city and I live next to Darling Harbour. It's beautiful man, let me tell you," Ramirez says, as he begins to explain to the Herald the backstory of the TikTok video that went viral around the world.

"I walk everywhere – I walk around, come back home, it’s awesome. I see everybody wearing Boston hats and Yankee hats."

Ramirez is not only famous for his ability to hit a baseball, but his quirky sense of humour. He spotted one bloke in a Red Sox cap while waiting in line at a Sydney cafe. "I was wondering if that guy got a favourite player. So I said, 'Hey, who's your favourite player?'"

"And he told me, 'Oh no, I got the hat because my girlfriend's name starts with a B.' That was it."

Ramirez can't go anywhere in the United States without getting asked for a selfie or an autograph – let alone his native Dominican Republic. But in Australia, even purported fans of the team he helped break a famous 86-year World Series curse have no idea who he is.

To twist a line from Brad Pitt's Billy Beane in Moneyball, in this country, there's rich sports and there's poor sports. Then there's 50 feet of crap. Then there's baseball.

Occasionally, MLB might sneak into TV bulletins or newspapers. But the Australian Baseball League – which has been running in its current incarnation since 2010 – is almost like a secret society, totally invisible to all but those who are immersed in it.

"When you’re in, it’s hard to get out. But getting in … it’s frustrating," says Sydney Blue Sox owner Adam Dobb. "From juniors all the way through to [the top] level, the game doesn’t have the awareness that the traditional Australian sports have." 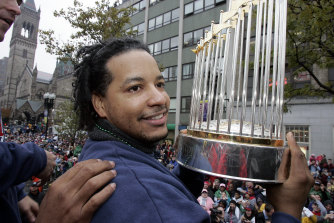 Which is why Dobb, a lifelong Red Sox fan and former amateur player himself, decided to shell out to bring Ramirez to the ABL. The founder and director of telecommunications company Commworx, Dobb took over the club when the league went private a few years ago, acutely aware that the product needed a lot of work.

"Two years ago we went to a Blue Sox game, me and my eldest. It was a boring night out. Boring baseball. The music was average, the food was average," Dobb says.

"I'd just spent three years previous to that coming in and out of America, going to minor league and MLB ballparks … I left there that night thinking, I'm not keen to come back here. I didn't have the heart to tell my young bloke."

Dobb initially thought he was the victim of a prank when an email lobbed in his inbox from Ramirez’s agent, expressing interest in a stint in Australia. "I actually remember spending the first few emails rolling my eyes as I hit send – like, I'll play the game," he says. 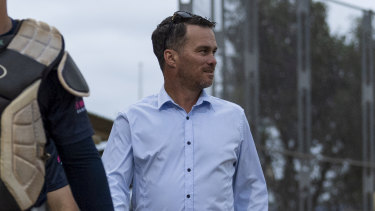 Blue Sox owner Adam Dobb thought he was being pranked when Manny Ramirez’s interest in playing in the ABL was first floated by his agent.Credit:Rhett Whyman

When it dawned on him that the prospect was very real, Dobb moved quickly to get the deal across the line – not just for the sake of the Blue Sox, who have struggled on and off the park since they were formed in 2009, but for the ABL, which has never had the chance to experiment with the marquee player concept other sports have flirted with.

Ramirez is one of the most decorated players in baseball history. But he's also no saint. He would be in the game's Hall of Fame by now were it not for the two black marks on his career: a pair of positive tests to performance-enhancing substances in 2009 and 2011, the latter which convinced him to retire from the big leagues instead of sitting through the 100-game suspension he was slapped with. And while he's a notorious prankster, some MLB clubs, including the Red Sox, eventually grew tired of his strange, sometimes air-headed antics.

For the ABL, though, he's pure box office. "He’s got the profile, that real mainstream cut-through," said Baseball Australia chief executive Cam Vale, who credits Ramirez for helping the ABL broker a series of US broadcast deals this season, which will see the league beamed into nearly 100 million American homes.

"A Manny per team wouldn’t be the worst model, if you’re sitting in my shoes, to help grow the game in this country. We’re probably going to get more out of this than he does."

It’s a minor miracle the ABL even has a season to promote, given the pandemic, which brought much higher-profile competitions to its knees. Two teams – Auckland Tuatara and Geelong-Korea – had to pull out, and the latest outbreak in Sydney's northern beaches has lobbed a fresh logistical curveball. But to even get to the starting line is an achievement Vale says that a niche sport like baseball should be very proud of.

"There’s been a sense of, I think for quite a while, entitlement in a lot of sports. COVID's sort of shown you’re not entitled to anything – you've got to really work for it.

"I’ve got a committed group of owners … we don’t get the profile, but we're on a path and I'm very confident we can emerge out of this strongly. We are genuinely looking at trying to make 10 years of growth happen in 18 months – this season and next season. Despite COVID’s challenges, I actually think we can."

Ramirez is certainly helping. Sydney are due to play away to Canberra, Perth, Melbourne and Brisbane this season, and all of those teams are already feeling the benefits.

"Their corporate sales are up, their ticket sales are up, they're promoting that Sydney's coming," Dobb said. "We've never had such demand for Sydney to be on the road as we have this year. It's good for the game. It's nice to see there's a lot of hype around the whole country." 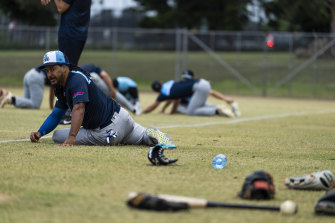 Manny Ramirez might be 48, but he’s refusing to give up his love for the game.Credit:Rhett Wyman

Of course, there's a catch: Ramirez is 48, after all. He hasn't faced a live pitch for three years, and has been trying his best to play down expectations, having only just emerged from hotel quarantine a couple of weeks ago.

"I have to take it day by day," he says. "I wish I could have come here when I was younger. But I'm here, and I have to help in any way I can. Bro, I love the game. I want to keep trying."

At his age, there was always a risk this experiment could fizzle out, and indeed, there have been some early hiccups. The Blue Sox released a dramatic statement on Thursday, the day they opened the ABL season against the Melbourne Aces, announcing Ramirez would be unavailable until further notice because of "ongoing sensitive and confidential medical reasons".

Time will tell exactly what is going on, but the fact that he’s even able to contemplate playing baseball two years short of his half-century speaks volumes about his work ethic and professionalism.

Ramirez has had to skip some corporate commitments in Sydney because they clashed with his gym and yoga time. He is vigilant with his diet, and even though his last MLB game was nine years ago, he has never stopped swinging.

Has he still got it? "Even in the first practice, watching him take swings – I mean, it's clear. It really doesn't leave you," said Blue Sox batting coach Rachel Balkovec, who was on the other side of the iPhone camera for that TikTok in the cafe.

"And credit to him, he’s stayed in shape. He’s never stopped acting like an athlete. And he's not even low ego – no ego. Last night at practice we did a bit of a classroom session and I was presenting to the hitters.

"He's asking questions, chiming in, creating conversation with the guys. For someone of that calibre, that level of play, to continue to be open-minded, it tells you why he even got here in the first place."

"He is one of the most humble humans I’ve ever met," said Dobb. "If anyone was able to have entitlement in this game, it's him. He just doesn’t have any. He's just one of the boys."

Ramirez can see plenty of potential in Australian baseball. He knows the omnipresence of baseball caps in Sydney – albeit primarily worn as fashion statements – suggests some form of latent interest in the game. You can almost hear the gears of his mind grinding away as he considers ways the sport could be made more popular, and whether there’s scope for any collaboration with cricket, for instance.

"Man, let me tell you something. It's a lot of talent here," he says. "You guys got like 35 players from Australia in the big leagues – I was doing my research. That’s not bad.

"They only need more reps. It's all about getting reps. That's why there's like 800 Dominican players in the big leagues – because we play every day. Practice. We play a lot of tournaments and stuff like that. That’s the answer."

The ABL season runs through to February. So does Ramirez's contract – but at his agent's insistence, the Blue Sox have an option for a second season. One way or another, he'll probably be back. If he doesn't play on, he could stick around as a coach, or an investor. He's even talked about obtaining Australian citizenship.

"It’s not a joke," Dobb said. "He wants to be a dual citizen. His wife texted me a couple of weeks ago and said, 'what are you doing to my husband?'

"He's asked for his flight home to be delayed in February because he wants to talk business. He's got some big plans in this country. I get a big kick at the moment out of being Manny Ramirez's boss. But to be his business partner will be next level."

Sports news, results and expert commentary delivered straight to your inbox each weekday. Sign up here.