LAS VEGAS — As Yankees General Manager Brian Cashman continued to kick the tires on free agents and trade proposals that might bring him a coveted starting pitcher, an injury replacement for shortstop Didi Gregorius and some bullpen fortifications, the only news he relayed Monday was what would not be happening.

Bryce Harper won’t be walking through that clubhouse door.

After a series of questions about Harper — the magnetic, 26-year-old star who turned down a $300 million from the Washington Nationals to become a free agent — Cashman went from bemused to incredulous.

“At no time at all — all winter — did I say I’m looking for an outfielder,” Cashman said, speaking in his suite here in Las Vegas to a group of reporters who cover the Yankees. “So the Harper stuff — I’m surprised you’re still asking.”

Such a swift, public dismissal of his interest in a player whose personality and game seem so finely tailored to the Yankees and their brand was the Yankees’ latest, and perhaps most forceful, attempt to distance themselves from the way they once operated under George Steinbrenner.

The rejection of interest served as a continuation of a desultory December for Steinbrenner, the former Yankees owner who died in 2010 — he was rejected by the Hall of Fame’s Today’s Game Era committee for induction on Sunday, and the Yankees recently lost out in the bidding for the top free-agent pitcher Patrick Corbin.

In the past, the Yankees might have been happy to accommodate the suggestion of Harper’s agent, Scott Boras, that he is quite capable of playing first base — just like they entertained the idea of a previous Boras client, Alex Rodriguez, playing third base.

“It’s not something that we would play on at that level and that type of money,” Cashman said, all but waving the possibility away with the back of his hand.

Cashman’s point was that the Yankees have built themselves into one of the best teams in baseball — if still a shade behind the last two World Series champions, the Houston Astros and the Boston Red Sox — in a deliberate, thoughtful manner.

They have rebuilt their minor-league development program, astutely assessed which prospects to hold onto and which to deal, and plucked diamonds in the rough, like center fielder Aaron Hicks and Gregorius, and perhaps first baseman Luke Voit, in exchange for superfluous parts. 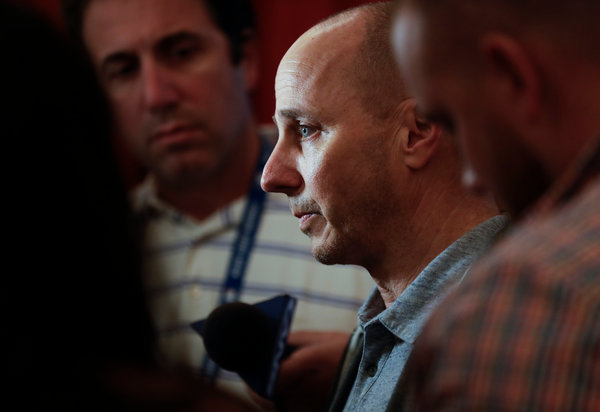 To Cashman, it has all come together through organizational synergy — the scouting, development, analytics, sports science and coaching staff members all working in sync.

So, just because the Yankees were valued by Forbes at $4 billion last April and were shedding more than $50 million in payroll at the end of last season, did not mean they were going to splurge on an extravagance like Harper or a finishing touch like Corbin. There will be no irrational exuberance.

If the Yankees used to regularly bid against themselves for free agents, now their view might be summed up thus: a price tag is a price tag.

“I don’t believe we need to abandon the successful, organized detailed process because now we’re knocking on the door,” Cashman said. “It doesn’t mean all of the sudden you become haphazard, or just reactive or emotional. I think, again, we’re keeping it simple.”

That meant that even though they assessed Corbin as the best starting pitcher on the free-agent market — and pitching was a glaring deficiency in their playoff losses to the Astros and Red Sox the last two seasons — they did not want to give Corbin, who is 29, the sixth year on a contract that he got from the Nationals.

They assigned a contract value to Corbin — five years, $100 million — and were not going to budge on the length. Cashman declined to explain why, saying it would be unfair to Corbin and the Nationals, but he did allow later that he believed there were better pitchers available on the trade market, one of them being the two-time Cy Young Award winner Corey Kluber of Cleveland.

Cashman was emphatic that this sort of discipline is nothing new, that the Yankees have been operating this way for a number of years.

He pointed to several deals that might have looked like a step backward, but were not — trading a valuable reliever, Justin Wilson, for two minor league pitchers (one of whom turned out to be even better, Chad Green); letting closer David Robertson leave as a free agent, then getting a compensation pick and signing Andrew Miller for less; and trading Adam Warren for international pool money.

“It’s convenient and an easy story to write about us being different than the Boss’s Yankees, but the game is completely different, too,” Cashman said, referring to luxury tax penalties that also include losing draft picks. “I think we’ve been operating in a different capacity because it’s a whole new world order.”

But those deals were made largely around the margins of the roster.

The more memorable ones have reshaped a roster. When the Yankees missed the playoffs in 2008, they lavished huge contracts on C.C. Sabathia, Mark Teixeira and A.J. Burnett and all played a role in their championship the following season.

It has been a decade, though, and as Cashman has been reminding, much has changed.

But for those who cannot dismiss the old feeling that, after being outbid for Corbin and passing on Harper, there will be another, reactive, pinstriped shoe to drop this winter, there is this: Cashman said on Monday that he has had several meetings with the agent Dan Lozano to discuss one of his clients — Manny Machado.