Melbourne City ended perhaps the greatest week of turmoil in the club's short history with a morale boosting 3-0 win over the Newcastle Jets. The home side hit the back of the net with two stunning strikes- one a definite contender for goal of the season – as the players rallied around under-pressure coach Warren Joyce.

Riley McGree and Luke Brattan were the men who got on the scoresheet in the first half, while young forward Lachlan Wales scored his first-ever City goal with a quarter of an hour remaining to give Joyce and the City hierarchy some breathing space after the loss in Brisbane a week earlier which sparked a wave of criticism. 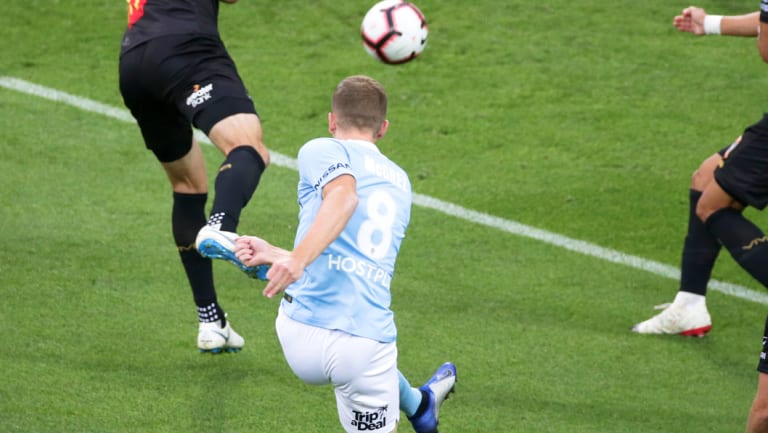 Whether this triumph will be enough to quiet the critics remains to be seen, but City has answered its naysayers in the best possible fashion, with three points and a clean sheet through a win that takes them to fifth on the ladder, just four points off league leaders Perth and two less than neighbours Melbourne Victory.

If the players were not supporting the coach – as the rumour mill has tried to suggest – then it didn't look like it here. Certainly the crowd was in better mood at the end of this game than it has been for most other home fixtures this season.

Riley McGree owed beleaguered boss Joyce plenty. After all, it was his celebrated scorpion kick goal when he was in Newcastle colours that denied City a place in last season's A-League Grand Final and, ultimately, a place in the Asian Champions League.

Now in City colours, McGree chose his moment to make at least partial amends at a time when Joyce most needed a boost, scoring a brilliant second minute goal to put his team on the way to an important victory. 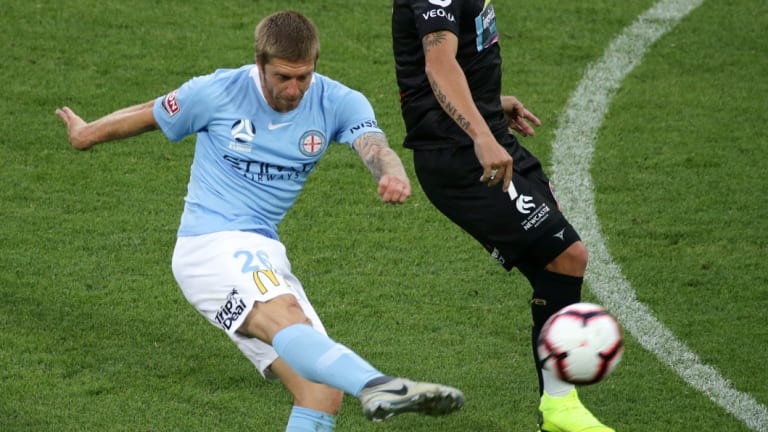 Thumping volley: Luke Brattan thunders the ball into the back of the net to put City 2-0 up.Credit:AAP

With scorned striker and fan favourite Bruno Fornaroli sitting in the stands surrounded by his family  and a supporter protest against his exclusion from the squad taking place for the first 23 minutes of this game (homage to the Uruguayan's shirt number), Joyce badly needed a result in this game.

And McGree's spectacular left-footed strike from inside the area in just the second minute of this game – right in front of the disgruntled Melburnians group of City's active supporters – was just the sort of start he and the club's management would have been hoping for.

One super strike in a half would have been sufficient for most matches.

But McGree's ferocious drive was eclipsed some 45 minutes later, in first-half stoppage time, by his team-mate Luke Brattan.

His stunning volley from outside the penalty area put his team 2-0 up at a time when the Jets had, it must be said, begun to look capable of finding a leveller to get themselves back in the game. 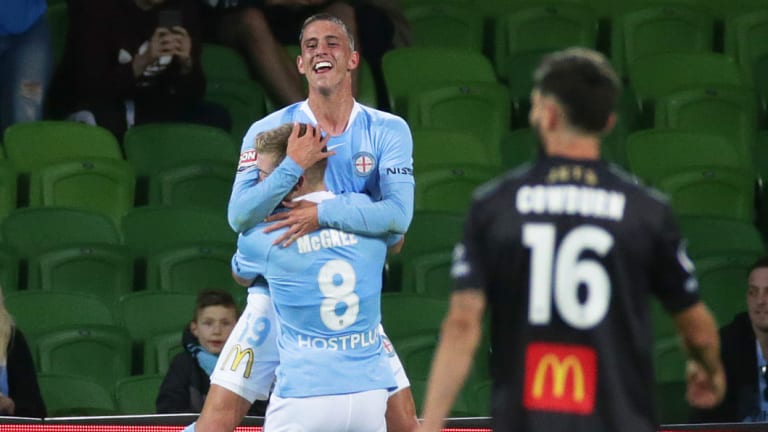 McGree's opener came when a corner by City's French forward Florin Berenguer looked to have been overhit as it drifted to the far side of the penalty area.

But McGree reacted quickly and with the Jets defence disorganised he easily sold Jason Hoffman a dummy before unleashing his unstoppable shot past Glen Moss.

Brattan's finish was even more memorable.

A City attack just before half time broke down and the Newcastle defence partially cleared the ball to the edge of the area.

Brattan controlled the ball on his chest and, as it dropped, struck it with excellent technique so that it dipped and then dropped under the crossbar with Moss flailing.

No wonder that he stood, grinning widely, with his arms outstretched as his team-mates ran to embrace him.

It had been a fascinating first 45 minutes bookended by City's two stupendous goals.

City's coach, its management and almost every facet of its operations had been under scrutiny all week, the Fornaroli saga – he had also been omitted for the game in Brisbane the previous week – acting as a catalyst for an open season of criticism about the club, its identity, playing style and recruitment.

But the eleven sent out by Joyce for this game certainly played as thought they were backing their coach, particularly in those early moments when the tone of a match is so often set.

McGree's goal gave them an excellent platform, one they could only have dreamed of.

But for the opening 15 minutes they hustled, harried, chased and competed with a vigour not always evident earlier this season.

Belgian import Ritchie De Laet, an always combative presence on the right flank, got forward at every opportunity; Brattan tried his luck – as if it was a sighter – with a volley that flew wide, Dario Vidosic had a header saved and McGree had another fiercely struck shot beaten away. 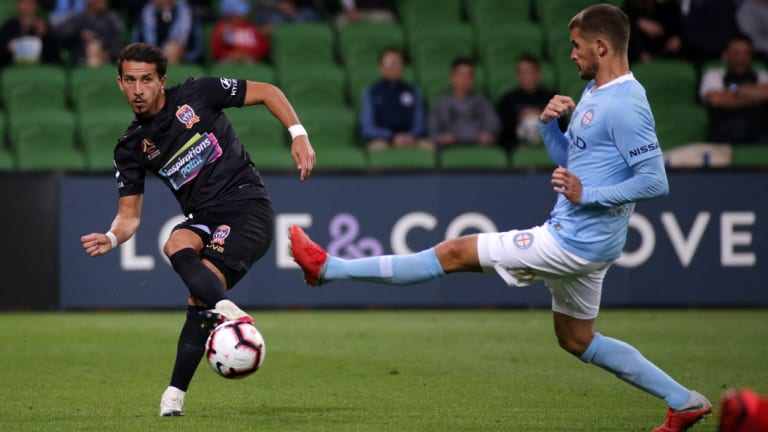 But the Jets are too good a team to be dominated for a whole game, and midway through the half they began to find some rhythm.

Eugene Galekovic had to be out smartly to dive at Ronald Vargas's feet, then the City keeper had to react smartly to push Jason Hoffman's lofted shot wide after an untidy goalmouth scramble. Dimi Petratotos then shot wide as the visitors began to threaten.

A Kearyn Bacchus long shot flew over the bar and Vargas again caused consternation for the hosts when, just before Brattan's second goal, he went on a driving run from deep before shooting just past Galekovic's post.

The Jets could have got back into the game right at the start of the second period had any of their forwards managed to get a touch on Petratos free kick but City pressed on at the other end. Brattan and Baccus both tried their hand before Galekovic was forced to block Hoffman's shot as the game ticked into its last 25 minutes.

Wales, an enthusiastic youngster who is enjoying a breakthrough season, notched his first goal in the 75th minute when he fastened on to a long ball, ran into the area and chipped the advancing Moss.