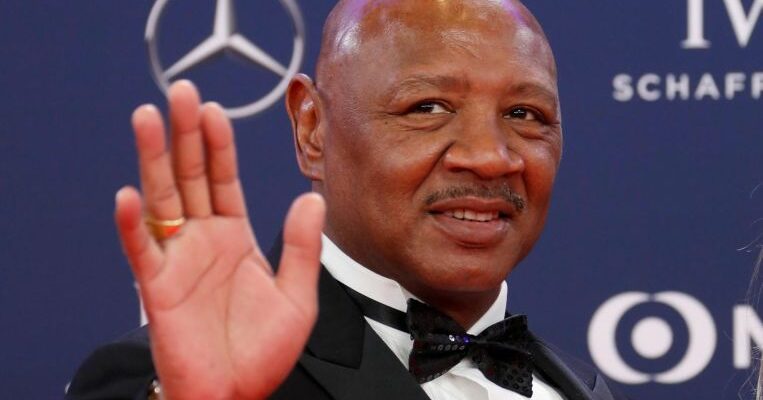 (REUTERS) – Marvelous Marvin Hagler, who dominated boxing’s middleweight division in the 1980s, has died at the age of 66, his wife Kay said on Saturday (March 13).

The cause of death was not immediately known. Celebrity website TMZ reported that he was taken to hospital in New Hampshire on Saturday with chest pains and trouble breathing.

Hagler, who legally changed his name to Marvelous in 1982, posted a record of 62-3-2 and ruled supreme until his reign as undisputed middleweight champion came to a controversial end in 1987 with a loss to Sugar Ray Leonard.

“I am sorry to make a very sad announcement. Today unfortunately my beloved husband Marvelous Marvin passed away unexpectedly at his home here in New Hampshire. Our family requests that you respect our privacy during this difficult time,” Kay Hagler posted on the Marvelous Marvin Hagler Fan Club page on Facebook.

Regarded as one of boxing’s great champions and best pound-for-pound fighters, Hagler was knocked down just once in 67 professional bouts while 52 of his wins came by way of knockouts.

A member of both the World and International Boxing Halls of Fame, he was twice named Fighter of the Year by The Ring magazine.

Hagler’s 14-year career is best remembered not for a single fight but one round, the first in his 1985 battle with Thomas “The Hitman” Hearns that became known as “The War”.

For three minutes of brutal violence the two men unleashed a barrage of punches on each other. Hagler would go on to win the fight when it was stopped in the third round, the bout instantly hailed as a boxing classic.

“Saddened to hear about the death of Marvelous Marvin Hagler. One of the greatest to ever step in the ring! #RIPMarvelous,” tweeted boxing great Oscar de la Hoya.

“He was a man of honour and a man of his word, and he performed in the ring with unparallelled determination. He was a true athlete and a true man. I will miss him greatly.”

Noted ring announcer Michael Buffer tweeted that he was “crushed” by the news.

Former world heavyweight champion Lennox Lewis tweeted: “This one hits so hard also because he was the one I emulated my own training camps after when I saw how seriously he took his training camps. The world is one great man less today.”